Uranium investments look attractive as the world shifts back to nuclear

Uranium is in the midst of a resurgence, with momentum shifting back towards nuclear as COP26 brings a renewed focus on energy 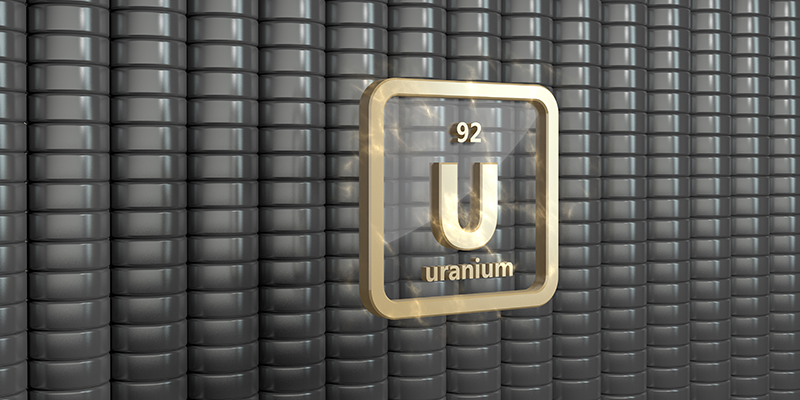 Uranium prices expected to boom as the nuclear resurgence grows

Nuclear has steadily fallen out of favour over the course of the past decade, with tragedy in Fukushima damaging the reputation of nuclear just like Chernobyl did before it. However, with the 2021 United Nations Climate Change Conference (COP26) now out the way, there is a clear disconnect between the energy required to power the global economy and what is currently available from renewable sources. As a result, we are starting to see a resurgence in the nuclear story, with many realizing that it provides a middle ground of highly efficient output at a fraction of the emissions. The chart below highlights both the spot and long-term uranium prices, with the latter representing the long-term contracts negotiated between buyers and sellers (85% of volume). Notably, we are finally back in a position where spot and long-term prices are largely moving in lock-step, mimicking the pattern seen prior to the big run in uranium prices back in 2000-2007. Clearly it is rare and seemingly bullish when we see spot above LT prices.

As with any market, pricing will be a question of demand and supply. With that in mind, lets consider a number of factors on both sides.

There are two aspects to cover on this front, with the recent growth in demand from ‘buy and hold’ investment vehicles accompanying a potential rise in nuclear power usage.

The Sprott Physical Uranium Trust has been a recent development in the market, with the Canadian-listed fund providing a key source of demand as they physically back any purchases. The growth of the Uranium story should bring further interest from the investment community, where funds flowing into the likes of the Sprott vehicle result in a subsequent rise in demand for the physical uranium. With the Sprott fund expected to also gain a US listing before long, this should help accelerate the investment demand that has already played a key role in driving up prices. The world’s largest producer, Kazatomprom, has similarly set up a fund that allows for market access with a greater focus on the Eastern market. Meanwhile, the UK market has the Yellow Cake stock which functions in a relatively similar way by backing up stock by purchasing and stockpiling Uranium.

Aside from the ramp-up in demand from investment vehicles, we are starting to see a groundswell of momentum towards nuclear as a energy source. Here are some of the major announcements that signal that shift:

While we are seeing prices rise, they remain well below the levels needed for many producers to be profitable. The lengthy nature of taking a project from infancy to end product means that the lack of investment over recent years will restrict the ability to quickly respond to near-term changes in price. We have seen little intention from the likes of Cameco and Kazatomprom to ramp up output in response to the recent rise, with prices expected to push back towards the $70 region before such big producers start to potentially react.

Investors can get exposure in a number of different ways, each with different risk profiles.

The Sprott and Yellow Cake funds will appeal to many as a way to roughly track the price of uranium, with investments physically backed by purchases of the material.

The Yellow Cake chart highlights how price has been on the rise from 76.4% support at £3.38. However, yesterday’s pullback did bring us towards the key £3.55 swing-low support level. A break back below that level would raise questions over a wider near-term pullback. Until then, this retracement is deemed a buying opportunity.

Another option would be to opt for the likes of Uranium Royalty Corp, which takes Royalties from companies in the sector rather than taking the risk of producing and prospecting themselves. However, there are plenty of other smaller names that are perceived to hold the potential for multi-bagging in the event of a uranium bull market.

The UROY chart shows how price has started to find support on the 76.4% Fibonacci support level at $4.82. With a uptrend clearly in play, bullish positions are favoured unless price breaks below the $4.51 support level.

Those seeking higher risk and reward, producers will provide an area of focus. The safer option would be giants such as Cameco.

Cameco shares have been drifting lower of late, in what looks like a retracement phase. However, until we see a break below $23.42, such a period of weakness looks a potential buying opportunity given the long-term prospects in the area.

One way of diversifying exposure would be to access exchange traded fund (ETFs) such as the Global X Uranium ETF, which provides access to a whole broad range of companies involved in uranium mining and the production of nuclear components.

A similar story for the share price, with the latest pullback bringing us into the 61.8% Fibonacci support level at $28.11. A break below the $25.97 level would be required to negate this ongoing bullish trend.