The top 10 most traded currencies in the world

The forex market is the biggest market in the world, accounting for an average of $5.1 trillion worth of trades each day. Here we take a look at the top 10 most traded currencies, which are involved in nearly 90% of trades. 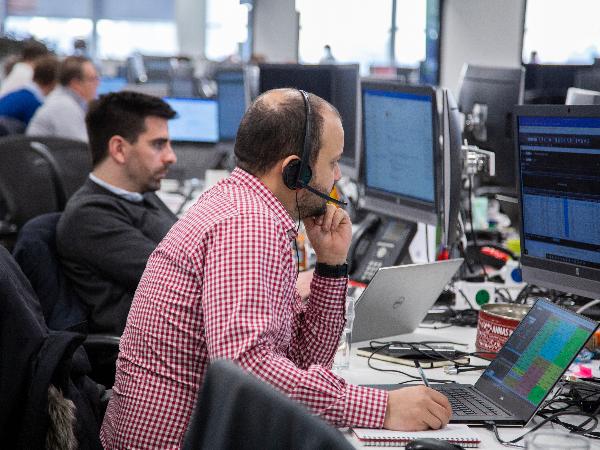 What are the most traded currencies in the world?

The top 10 most traded currencies by value are as follows:

This is based on the most recent research by the Bank of International Settlements, which measures turnover in the forex markets every three years.

Here we take a look at each of the top 10 most traded currencies in turn and explain some of the factors that can affect their values relative to other currencies.

Issued by the Federal Reserve (Fed), the US dollar is the official currency of the United States. It is the number one most traded currency globally, accounting for a daily average volume of $2.2 trillion.1

There are several reasons for its popularity. Firstly, the US is the world’s largest economy and a powerhouse in international trade. Secondly, the US dollar is the world’s primary ‘reserve currency’, held by central and commercial banks for the purposes of international transactions and investment – estimated to make up nearly 63% of currency reserves by volume.2 And thirdly, many commodities are priced in dollars, including gold, oil and copper.

The euro is the official currency of the European Union (EU) and the second most traded globally, accounting for a daily average volume of nearly $800 million.1 It is issued by the European Central Bank (ECB).

The popularity of the euro is primarily down to the scale and economic clout of the area in which it is used – the eurozone. This currently comprises 19 of the 28 countries within the EU, but the bloc’s remaining members – except the UK and Denmark – are required to join in time under the Maastricht criteria. It is also the world’s second biggest reserve currency, estimated to make up roughly 20% of global reserves by volume.2

The euro’s value is strongly influenced by political and economic developments within the bloc. Events that can have an effect include ECB meeting announcements, gross domestic product (GDP) releases, employment data, national and EU-wide elections, among others included on our economic calendar.

The Japanese yen is the official currency of Japan and the third most traded globally, accounting for a daily average volume of close to $550 million.1 It is also the third biggest reserve currency – estimated to make up around 4.9% of global currency reserves.2 It is issued by the Bank of Japan (BoJ).

The yen’s value is highly dependent on the strength of Japan’s economy, particularly its manufacturing sector which is responsible for key exports including vehicles, electronics, machine tools, ships and textiles. As the value of the yen often increases in line with demand for these products, many forex traders pay attention to economic releases. These can include BoJ meeting announcements, GDP data, the index of industrial production, the Tankan survey, and unemployment numbers.

The strength of the Chinese renminbi can also have an effect as China is a key competitor in manufactured goods. A weak renminbi can make China’s exports more competitive internationally, reducing demand for Japanese products and, in turn, the yen. Finally, it is worth noting that the cost of oil can play an important role in determining the yen’s value. This is because Japan is a major importer of oil and high prices can weigh heavily on its economy.

Markets to watch: USD/JPY and EUR/JPY

The pound sterling is the official currency of the United Kingdom and its territories, and the fourth most traded globally at a daily average volume of nearly US$325 million.1 It is also the fourth biggest reserve currency – estimated to account for 4.5% of global reserves by value.2

The pound’s value depends largely on the UK’s economic performance, with inflation rate data, the Bank of England's (BoE's) monetary policies, GDP and employment reports all likely to have an effect. In recent years, its value has also been affected by the UK’s changing relationship with Europe: the country voted to leave the EU in a referendum held on 23 June 2016. Brexit is currently scheduled for 29 March 2019, with the nature of the country’s final relationship with the EU – particularly its future trading relationship – likely to impact on the pound in the years to come.

Markets to watch: GBP/USD and GBP/EUR

The Australian dollar is the official currency of the Commonwealth of Australia and the fifth most traded globally, accounting for a daily average volume of US$174 million.1 The currency is the sixth most commonly held reserve currency – estimated to account for 1.8% of global reserves by value.2 It is issued by the Reserve Bank of Australia (RBA).

The Australian dollar’s value is strongly influenced by commodity prices and the ‘terms of trade’ – the ratio between the prices of its imports and exports. Australia is a major exporter of coal, iron and copper, among other mined commodities, and a major importer of oil – so shifts in the trading volumes and prices of these commodities can impact AUD.

The Canadian dollar is the official currency of Canada and the sixth most traded globally, accounting for a daily average volume of US$130 million.1 The currency is the fifth most commonly held reserve currency, at 2.02% of global reserves by value.2 It is issued by the Bank of Canada (BoC).

Much like Australia, Canada is rich in natural resources and a major exporter of commodities, which means their prices can be a critical factor in determining CAD’s value. The currency is likely to rise in value if commodity prices increase and fall in value if they decrease.

Canada’s major trading partner is the US, which accounts for more than 75% of all exports and 50% of its imports.3 As a result, Canada’s economy and the value of the Canadian dollar are particularly sensitive to changes in US economic performance and the value of the US dollar. Differences between the interest rates offered by the two countries can also play an important role in determining CAD’s value, with the currency likely to appreciate against the dollar if the BoC’s rates are higher than the Fed’s, and vice versa.

The Swiss franc is the official currency of Switzerland and the seventh most traded globally, accounting for a daily average volume of US$122 million.1 It is also the eight most commonly held reserve currency, at 0.18% of global reserves by value. It is issued by the Swiss National Bank (SNB).

The country’s reputation for financial services and banking secrecy, relatively sound monetary policies and low levels of debt have made the Swiss franc a ‘safe-haven’ currency. This means it tends to rise in times of global economic uncertainty as money pours into the country.

Markets to watch: EUR/CHF and USD/CHF

The Chinese renminbi – sometimes referred to colloquially as the ‘yuan’ – is the official currency of the People’s Republic of China and the eighth most traded globally, accounting for a daily average volume of US$101 million.1 Despite being an emerging market currency it is also the seventh most held reserve currency – estimated to account for 1.23% of global reserves. It is issued by the People’s Bank of China (PBoC).

For many years, the renminbi was pegged against the US dollar. But the PBoC recently loosened its monetary policy to allow it to float within a narrow band against a basket of major currencies – apparently with a view to letting it float freely in the future. However, many economists believe China has benefitted from a weak renminbi, which has made its exports more competitive over the last few decades and enabled it to maintain a trade surplus with many other countries, and are therefore sceptical of its claims to be targeting a free-floating renminbi.

As China is a major exporter of commodities and manufactured goods, the value of the renminbi depends heavily on the country’s terms of trade, particularly with major trading partners such as the US and Europe. As a result, Trump's trade war and its effects on US-China relations and international trade in general could have a big effect on the renminbi in the coming months and years.

The Swedish krona is the official currency of Sweden and the ninth most traded globally, accounting for a daily average volume of US$56 million. Unlike many of the other currencies on this list, the krona is not a major reserve currency. It is issued by Sveriges Riksbank.

The krona’s value depends largely on monetary policy set by Sveriges Riksbank, as well as the economic performance of Sweden and its major trading partners – mainly countries in Europe, along with Norway and the US.

And, as with many of the other currencies on the list, the krona’s value is heavily influenced by the terms of trade of its issuing country. In Sweden’s case, exports are of particular importance as manufactured goods – including cars, engines and telecoms equipment – make up more than 44% of its GDP. Demand for the krona can therefore fall in times of global economic downfall.

The New Zealand dollar is the official currency of New Zealand and the tenth most traded globally, accounting for a daily average volume of US$52 million. Like the krona, it is not a major reserve currency. It is issued by the Reserve Bank of New Zealand.

The value of NZD is strongly dependent on New Zealand’s trading relationships, the value of the country’s imports and exports, and the strength of trading partners’ currencies. New Zealand’s key trading partners are China and Australia. Its main exports are agricultural products – particularly dairy and meat products – while its main imports are oil, machinery and cars.