Trader thoughts — the long and short of it

Volatility is still elevated. It's one moment up and one moment down. Price action and sentiment is shifting all in the space of a single session. 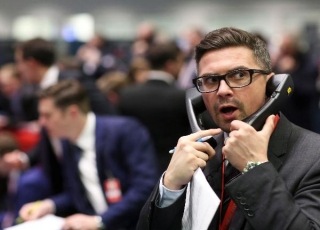 The extreme vacillations in price and sentiment are wrung by the twisting fortunes of the global economy's two major forces: the Chinese and US economies. Day-to-day, markets are playing out like a game of pong, with one side rising only to strike the ball in the opposite direction to send the other diving lower. Once again, a sharp rally in China's equities just prior to its lunch break yesterday fizzled throughout the day, to the chagrin of nonplussed European and North American equity traders. The remainder of Thursday's session since has seen a sea of red, as the bears one again have-their-way with the market.

Several causes have been used to rationalise last night's drop in US equities, ranging from fears regarding poor earnings and soft US housing data last night. Nothing major has thus far leapt out as a catalyst however, seeming more like a continuation of the very choppy trend we've watched play out for weeks. Havens maintained their trend higher amidst the risk-off sentiment, pushing US Treasuries (and bond markets in general) higher. The USD has rallied on this basis, diving into the 1.13 handle against the EUR and the 1.28 handle versus the GBP. While Gold prices have remained steady, as traders maintain their hedge against fiat currency risk.

The Australian Dollar has naturally suffered from the stronger greenback, to be squashed toward the 0.7050-mark. The Kiwi has endured a similar fortune, though the other of the Big 3 commodity bloc currency, the CAD, rallied after he Bank of Canada hiked interest rates overnight. The ultimate growth-versus-risky proxy, the AUD/JPY, has plunged to around 79.30, epitomising the prevailing fears regarding global growth and equity market bearishness. And of greatest global significance, the USD/CNH continued its apparently inexorable run toward the 7.00 handle, breaking through 6.95 to trade close to year-to-date highs.

Rates and currency markets will remain in focus over the next 24 hours, in preparation for the ECB's monetary policy meeting. The ECB won't materially change policy at this meeting: stimulus will stay on, and rate settings will remain negative. What will be watched for however, is comments on the unfolding political-economic issues regarding Brexit and the Italian fiscal problem, and more importantly, the central bank's plans to implement its Quantitative Tightening (QT) program. The expectation is currently that the ECB will flag the beginning of the end to this program in December this year, all the while reassuring markets that interest rates will stay where they are -- effectively at 0% -- until well into 2019.

The deepest cause of the volatility experienced in global financial markets is the tighter liquidity conditions, aided just as much by the ECB as the US Federal Reserve. A profound reaction to any mention by the ECB of its QT intentions isn't greatly expect tonight, however it's practical implications in the medium-to-long term sow the seeds of the sort of volatility heaped upon markets over the last several weeks. Tonight's ECB meeting is being treated as potentially another reading of the last rites to the easy money era. The realisation amongst markets participants is that (finally, after a decade) the ability to gorge on free money is over, tipping the risk/reward ledger out of the favour of long booming global equity markets.

The problem is, with the necessity to tighten global monetary policy in the face of better global growth and higher inflation risks, the global economy is being threatened on several fronts from a breakdown in international geopolitical and economic ties. The day-to-day commentary on Wall Street is centred on this dynamic, and it played out again in last night's major equity sell-off. Growth/momentum stocks in US tech caused the Nasdaq to sustain the greatest losses across US indices overnight, but fears about slower earnings growth from weaker economic fundamentals also pushed the S&P 500 and the Dow Jones in the realms of 2% lower. The next 48 hours become increasingly significant as the losses in North America mount: tech giants -- those who have pushed this market higher-and-higher -- Microsoft (who this morning reported record profits in the first quarter) Amazon and Alphabet are report earnings, with the reaction to them potentially deciding the view on what the futures holds for US equity markets.

SPI futures portend a very challenging day for the ASX 200, with markets pricing in a 79-point drop at today's open. Zooming out to the bigger picture as it currently stands, there are few glimmers of hope for Aussie equity bulls now. The major drivers of upside are all struggling: the banks are battling potential regulatory crack downs and a slowing local property market; major healthcare stocks, with their stretched valuations and low yields, have lost the bid of momentum investors; and the miners are battling fluctuating commodity prices amid concerns regarding the trade-war and global growth. Opportunities always exist for the savvy reader and investor, of course, but extending the rationale enunciated and looking at the technicals as they gradually unfold, signs of a bearish trend in the ASX 200 are progressively emerging.