When will the next recession be? Watch these 3 key indicators

Are we approaching a recession? We show three key indicators that you can use to make your own decision on if the economy will continue to grow, or whether we are in danger of entering a global recession for the first time since 2009. 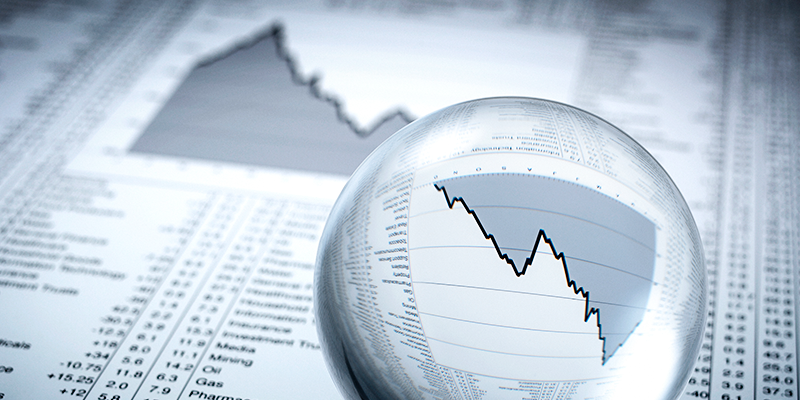 Last year global stocks fell for just the second time in ten years, with the other dip occurring in 2011 at the height of the European debt crisis. Since the start of 2009, global stocks have returned 200%, or 11.5% per year. Put differently, a £10,000 investment would now be worth £30,000 on a total return basis, excluding fees and taxes. 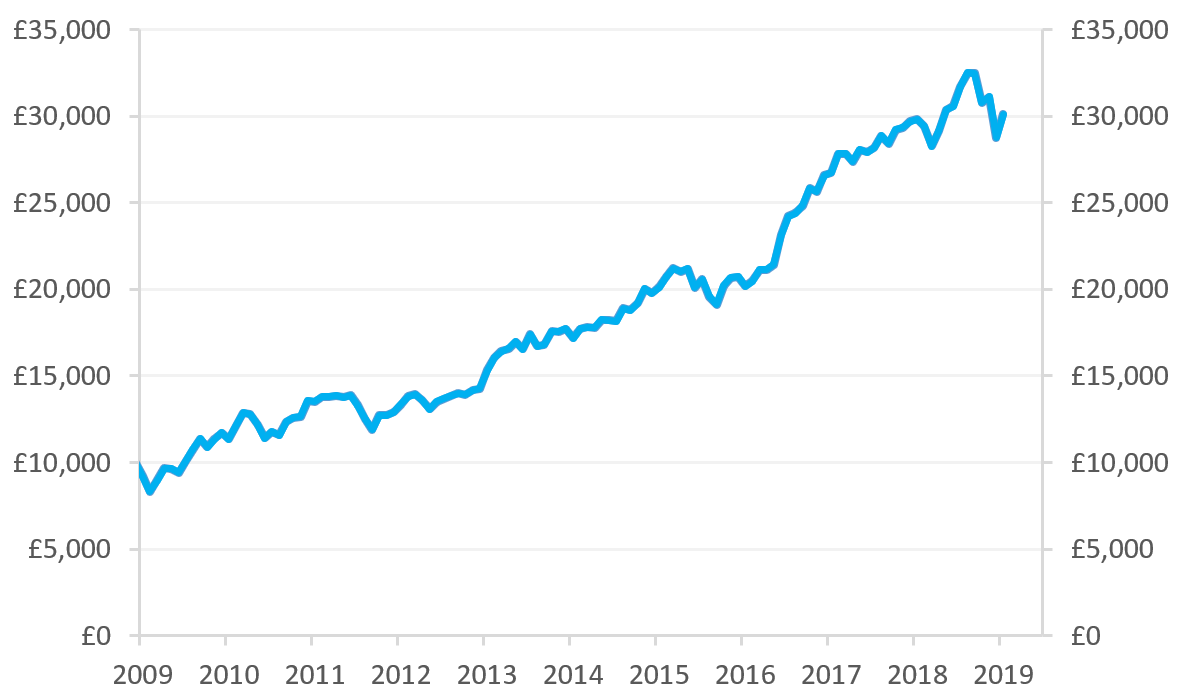 Recent returns have exceeded long-term averages, where investors have seen 7% returns over extended time periods. A 7% total return - capital gains plus dividends - seems about right as the value of companies should grow in line with the wider economy, a method famously used by Warren Buffett who took the market capitalisation-to-gross domestic product (GDP) ratio to assess whether the market was currently expensive or cheap.

Global GDP growth has averaged 3% since the 70s. Including inflation, which is commonly targeted by many central banks at around 2%, gives nominal GDP growth of 5%. Adding in dividends, which have been paid out at an average rate of 2% per year, gets us to our expected total return of 7%.

So, with a period of sizeable outperformance already behind us, has this bull market got further legs or should we realistically expect lower or negative equity returns and a recession soon?

Avoid being spooked by news headlines

Trying to accurately predict the end of a cycle is near on impossible though. You may well be right in the end but being too early can be just as costly. The two headlines below come from Forbes, written exactly five years apart by the same author. During this period the MSCI World Index, which tracks a basket of over 1632 stocks from around the world, rose 84%. It pays to remember that journalists are paid to sell content, not to predict the future.

While equities are unlikely to continue to perform at the rate seen over the previous ten years, markets don’t feel like they’re in a state of irrational exuberance, which typically exists towards the end of a bull market. Looking back over the last century, some of the largest gains have come towards the end of the economic cycle. Simply skimming the headlines to gauge market sentiment can therefore be a very dangerous game.

Predicting the future is difficult, but there are economic indicators that can signal a turn in the global economy. We outline three below.

Companies from the United States make up 62% of MSCI’s World Equity Index and while around 40% of S&P 500 revenue is derived from overseas, the health of the US economy is paramount to the performance of global stocks.

One well known gauge of the outlook of the US economy is the Leading Economic Index, or LEI for short. First created by the National Bureau of Economic Research (NBER), the LEI is a proven predictor of recessions.

The LEI is assembled using ten separate data releases, ranging from average hours worked to the supply of money in the economy. While quarter four (Q4) 2018 certainly put a dent in the value of most investor’s portfolios, the LEI hardly budged, suggesting that the odds of a recession have not materially risen.

After the latest release, which is normally published around the 20th of each month, The Conference Board said that the LEI currently suggests that the economy could slow towards 2% growth by the end of 2019. Not exactly the economic doomsday that many in the mainstream media are predicting. 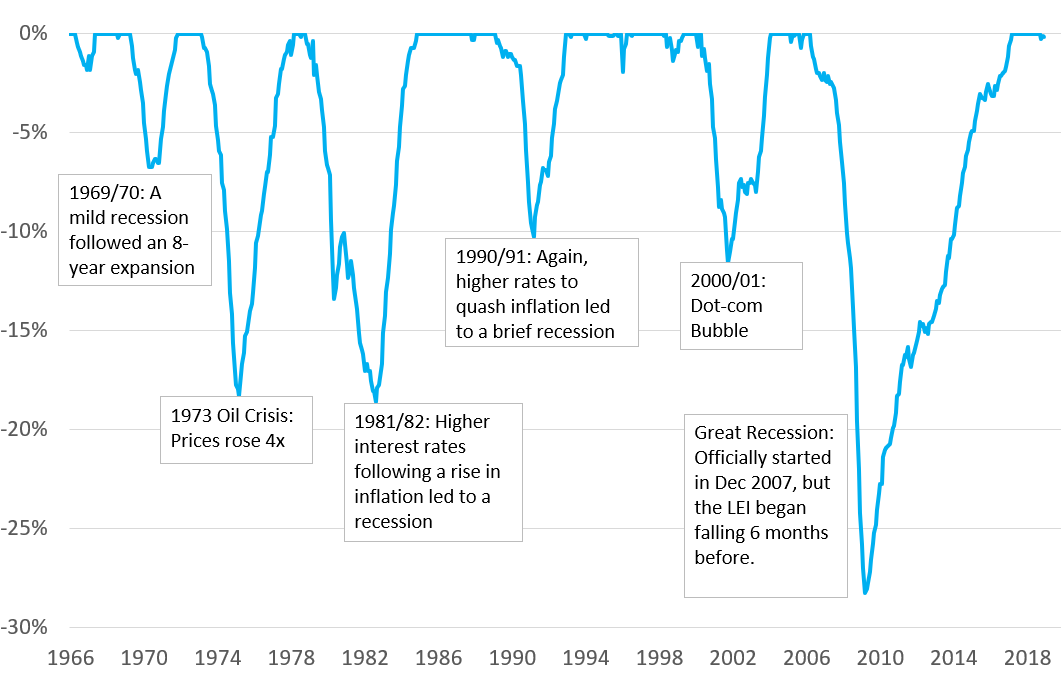 The last six major recessions have all followed a drop in the LEI of 2% from its previous high. 1967 and 1996 were near misses, but overall the LEI is an extremely useful indicator to get a broad assessment of the economy.

You can see the latest data release on the Conference Board’s website.

China also is a significant driver of global economic growth. Its weight in global indices is low due to the inaccessibility of much of the Chinese stock market, but according to the international monetary fund (IMF) it has already overtaken the US as the world’s largest economy based on purchasing power parity.

An economic slowdown would have a large negative impact on many countries, especially amongst major commodity exporters such as Australia and Brazil. If China’s demand for natural resource did decline steeply, it would be reasonable to expect a swift depreciation in the Aussie dollar and Brazilian lira.

However, many economists believe that the government produces misleading economic statistics, disguising the true extend of the slowdown that Asia’s largest economy is facing.

A more reliable economic indicator is the Organisation for Economic Co-operation and Development's (OECD) China Composite Leading Indicator (CLI), which is created from six data points; ranging from the production of fertiliser, steel and motor vehicles to the results from a business survey on expectations of future orders. 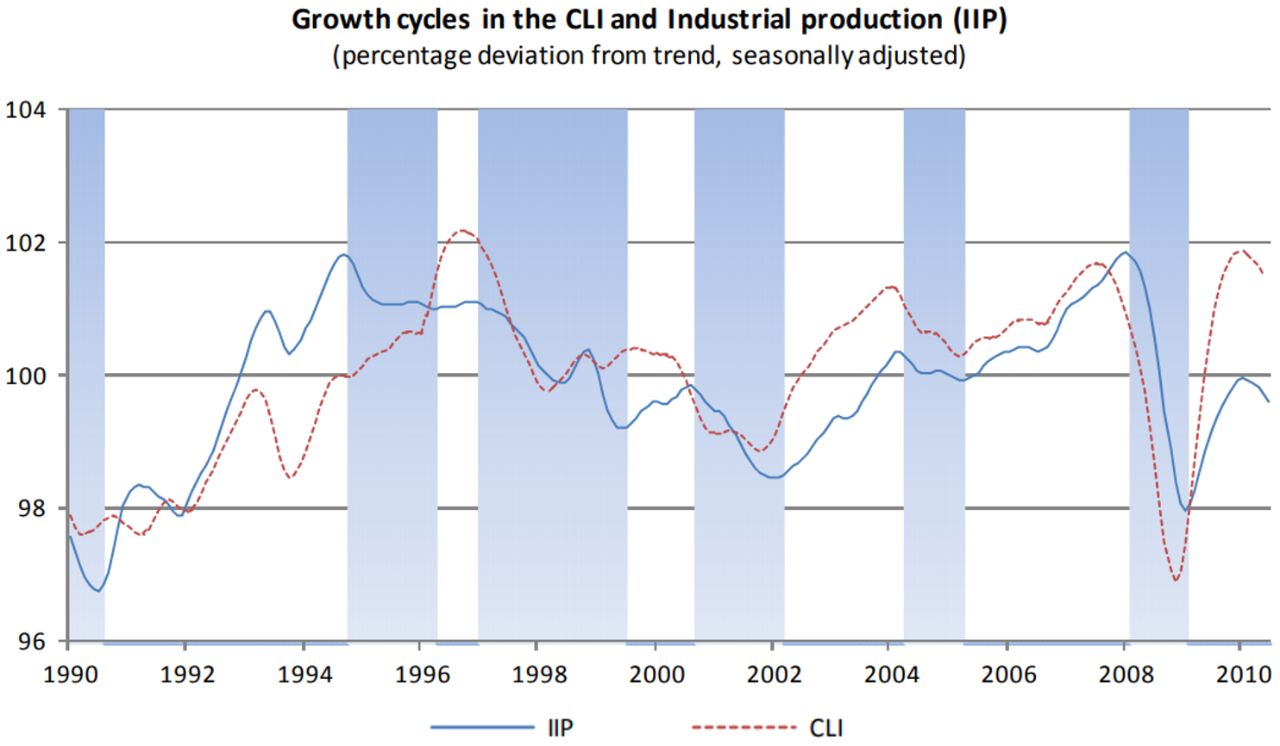 Analysing how well the CLI predicts of turning points in the economic cycle compared to official industrial production data shows that the CLI has an average lead of six months. As an example, before the financial crisis the CLI peaked in June 2007, while official industrial production data continued to look robust for a further seven months - proving the CLI be a useful tool for spotting early signs of slowing growth.

You can access the Composite Leading Indicator for China and 45 other countries and regions on the OECD website.

3. The Shape of the Yield Curve

The third indicator is the yield curve, which plots the yield an investor will receive on bonds of lengthening maturities.

An upward sloping curve indicates that the market assumes interest rates will rise in the foreseeable future. If this is the case, investors will expect to receive a higher return on longer-dated securities than shorter-dated securities.

In contrast, a downward sloping curve indicates that the market expects lower rates in the future. Over the economic cycle; the slope, shape and height of the yield curve will change. One way to plot these changes is by taking the difference in yields between two securities with different maturities. Lazard Asset Management plotted the spread between the three month Treasury bill against the ten year Treasury bond back to the 50’s in the chart below. 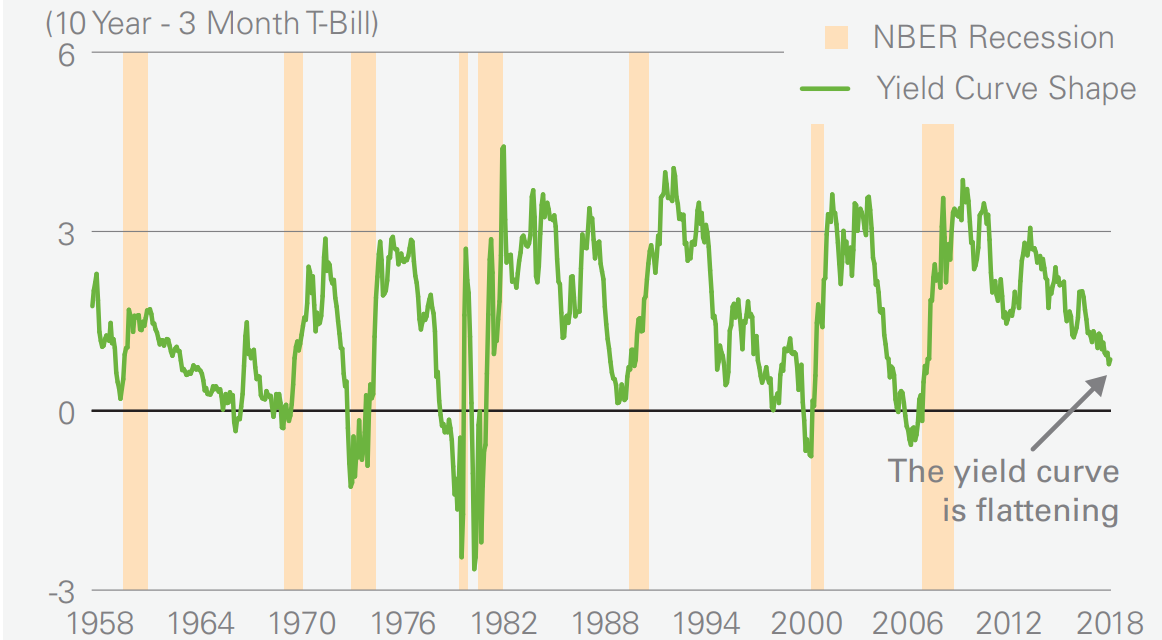 Lazard’s research shows that the yield curve has consistently inverted before each recession. In fact, on average, the curve inverts 14 months before the start of an economic downturn.

The current spread suggests that another recession could be on the way. The yield spread between the three month and ten years is just 0.30%, the lowest level since before the last financial crisis, having fallen consistently since the start of 2017 from 1.9%.

Lazard believes that this time is different. They cite that while the yield curve expects higher interest rates, these hikes are to 'normalise' monetary policy, not combat inflation. After eight successive rate hikes by the Federal Reserve (Fed), real rates are only now approaching zero and their analysis shows that the economy has never gone into recession when the real fed funds rate is at or below zero.

If this theory holds, then it may be more useful, for now, to keep an eye on economic fundamentals that are tracked by leading indicators. However, when monetary policy eventually becomes 'normal', the yield curve will no doubt regain its status as an accurate recession predictor.

You can track and download data on the spread between each maturity of US Treasury security on the US Treasury website.

Tools to track economic momentum are useful, but a key message is to not allow headline news to influence your investment plan. Instead, your investment decisions should be based on the amount of risk you are able and willing to take on.

At IG, we have a range of ready-made portfolios that vary in the amount of volatility that you can expect to undergo over time. But before you invest, we ask you some questions to assess both your willingness and ability to take on risk.

Our asset allocations are determined by our partners at BlackRock, the largest asset manager in the world. Once you are invested, you have the ability to instantly switch between each profile, and we will never charge you for the privilege.