US bank earnings – Q2 look ahead

Will the next batch of figures provide the bullish catalyst the sector needs?

Sentiment towards the banking sector has been boosted by the Federal Reserve’s recent greenlighting of a capital return programme for larger banks. However, earnings forecasts for the big banks, which begin reporting their second quarter (Q2) earnings on Friday, have been steadily downgraded since the beginning of the year.

The lack of market volatility has meant that revenues from trading desks are expected to be lower, with Bloomberg consensus forecasts down for banks with big trading divisions. Among those hit hardest will be Goldman Sachs and Citigroup, whose forecasts are 11% and 8% lower respectively. Banks with bigger retail divisions are expected to fare better, with Bank of America and Wells Fargo’s figures down around 2-3% each, as higher interest rates than a year ago mean that borrowing charges for loans are higher.

Fundamentally, the backdrop remains sound. A steadily tightening Fed is being matched with an improvement in jobs and wages, although not quite at the pace that the Fed would like. Worries about sub-prime car loans make the occasional wave among investors, but the prospect of higher dividends over time remains an encouraging prospect.

Banks were meant to be the big winners of 2017, but while the sector is up around 8% since the start of the year it has not been an easy ride. The sector rallied hard into March, but then dropped back to flat from mid-March until early June. Since then, it has recovered, but the highs of March are yet to be broken.

The Financial Sector SPDR exchange traded fund (ETF) provides a useful way of following the action in US financials, and here we can see the indecision that has prevailed throughout the year. A rally to 2529 in March was followed by a swift drop back to the lows of December 2016 at 2285, and since then this range-bound pattern has remained. May’s rally has carried the price back to the March high, but so far a breakout has yet to materialise. Nonetheless, with the three moving averages all still headed higher, it makes sense to keep following the trend and stay broadly bullish. 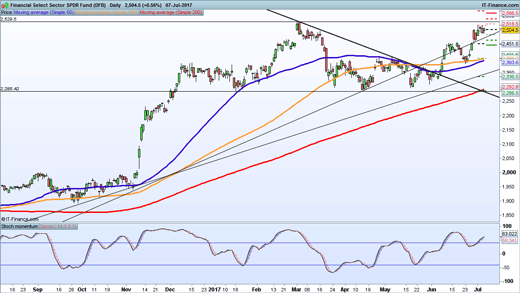 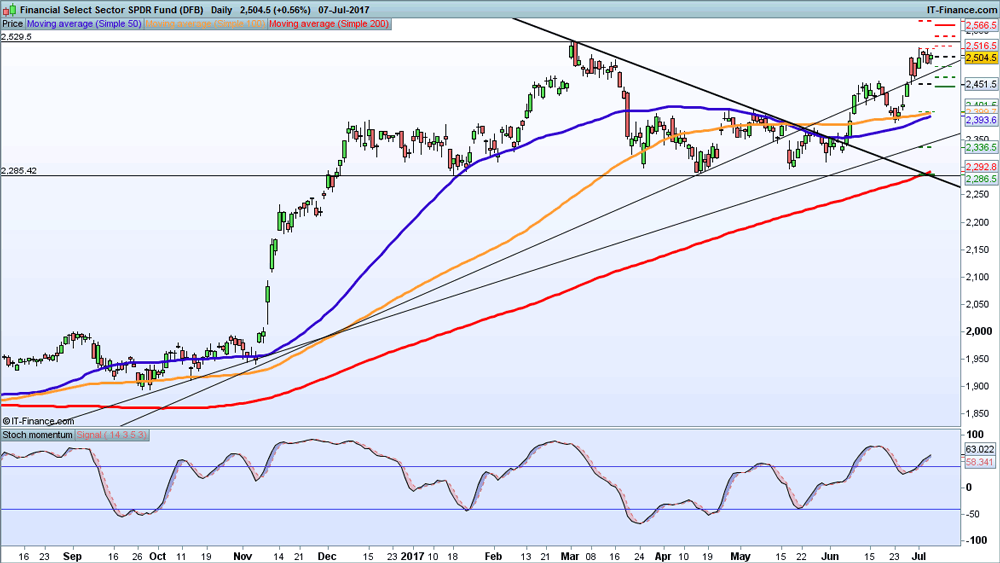