Now we play the waiting game, it seems. The US electorate have set off to the polls to vote in their mid-term elections, and the world now awaits their decision. 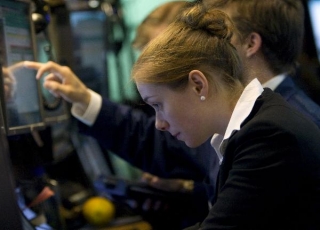 America votes: Financial markets aren’t exempt from the interlude, trading on very thin volumes, as traders opt to stick to the sidelines until a result is revealed. There appears a very general unwillingness to jump-in to markets ahead of the crowd on this event, presumably owing to the incredible surprises public votes have thrown-up in the past. A collective “let’s just wait and see” approach has been adopted by market participants, who will surely jump back into trading in a flurry once an outcome to the US mid-terms is known. As it stands, a reclaiming of the House of Representatives by the Democrats, and a hold of the Senate by Republicans is the bookies’ tip – a deviation from this outcome is where some degree of volatility may emerge.

ASX200: SPI futures are presently indicating a slim 8-point dip at the open for the ASX 200, following a day where the Australian share market rose by almost 1 per cent. Volume was nearly half of the 100-day Average-Volume-At-Time yesterday, courtesy of not just looming US mid-term elections, but also the Melbourne Cup public holiday in Melbourne. The lull provided opportunity for the bargain-buyers to jump into the market and try to pick-up a few good deals. The thin trading accentuated the bid-higher of the ASX200, resulting in a day’s trade of 70 per cent breadth. The day’s rally was certainly little to crow-home about: the thin volume exaggerated the upward move and took the ASX200 index merely to the top of a sideways trading range (between 5805 and 5875) that the market has occupied since the start of the month.

RBA: The event of most significance during Asian trade yesterday (outside the horse race, presumably) was the RBA’s monetary policy meeting. No move and few surprises were what punters expected, and the price action in markets reflected that – the AUD/USD barely budged, trading between 0.7205 and 0.7215 after the release. There was some interesting detail in the accompanying policy statement however, that illustrated the gradually shifting perspective of the RBA on the local economy: the unemployment forecast was revised down to 4.75 per cent by 2020; the inflation forecast was pinned-down to 2.25 per cent by some point in 2019; and the central bank’s assessment on credit growth acknowledged it had now “eased”.

Asia: Across the broader Asian region, a continuation of the week’s themes played-out. Like the ASX, thin activity propped up the Nikkei and Hang Seng, with the latter experiencing volumes a relatively significant 17 per cent below average. Chinese indices witness more-or-less normal trading and it showed in the results: the CSI300 (for one) was down -0.6 per cent for the day, primarily due to traders exiting their long positions in Chinese stocks again, after the excitement about possible progress between the US and China on trade negotiations fizzled. Futures markets are projecting a flat to weaker start to Asian session today; however, as the results of US mid-terms filter through throughout the day, expect outsized reactions in Asian equities if some surprises eventuate.

Wall Street session: As of this week, Wall Street closes at 8.00AM (AEDT). At time of writing, the lacklustre trading and thin volumes that has characterized markets the world over this week is generally holding true for US stocks, too. A fine green layer of paint is covering equity indices today, with the Dow Jones, S&P500 and NASDAQ all slightly higher for the session, following a down-session in European shares earlier in the day. A bounce in US tech stocks has underpinned the move, with the NASDAQ experiencing very close to normal trading activity throughout the North American session. US Treasury Yields have furtively ticked higher overnight, taking the yield on benchmark 10 Year US Treasuries to 3.22 per cent, and the yield on the US 2 Year note to a new post-GFC high of 2.92 per cent.

US Treasuries and Currencies: The price action in US bonds will be worth watching once mid-terms are done-and-dusted, especially given that the next major risk event this week will be the meeting of the FOMC on Friday morning (AEDT). Equity markets have often sold-off based on a spike in bond yields in the recent past, and if the Fed on Friday espouse a hawkish view for rate hikes in 2019, the repricing of US interest rate expectations could spark some sort of sell-off in US Treasuries and global equity markets. As it applies to the US Dollar, currency markets have also proven stagnant ahead of US mid-terms. The greenback is weaker, but that appears largely due to a (very) modest bid higher of the Pound and Euro on the back of Brexit optimism. Despite the uncertainty of the US elections, the Yen remains weaker and gold has dipped to $US1226 per ounce.

Oil: The most significant price action over the past 24 hours has been the continued fall in oil prices. The price of the black stuff plunged further last night -- to the low$US62 and $US72 per barrel mark in WTI and Brent Crude, respectively -- as fears of undersupply, courtesy of fresh US sanctions on Iran, were quelled. News that the White House had provided temporary exemptions to some countries to continue importing Iranian oil, coupled with a pledge from Russia to aid the Iranians move their oil stockpiles onto global markets, have been the major drivers of the sell-off. One must also surely assume the Saudi's are boosting their output to stave-off more bad press after the murder journalist Jamal Khashoggi. Nevertheless, the fall in oil prices has weighed on USD/CAD and dragged the overall Bloomberg commodity index down for the day.