Sharp divergence to continue in a transitional 2018 for commodity prices

The sharp divergence of commodity prices is expected to continue in 2018, Charles Gibson, of Edison Investment Research, tells IGTV.

2017: a divergent year for commodity prices

Last year was a very different year for commodities. After a couple of years when most metals moved within a very tight range, 2017 was notable for sharp divergence between the top performers. These top performers included the likes of cobalt and vanadium, which more than doubled in price, compared with the stragglers like gold and silver. 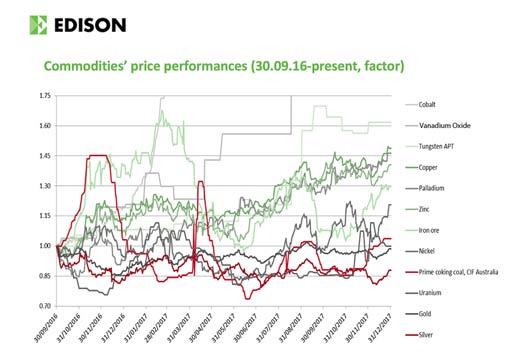 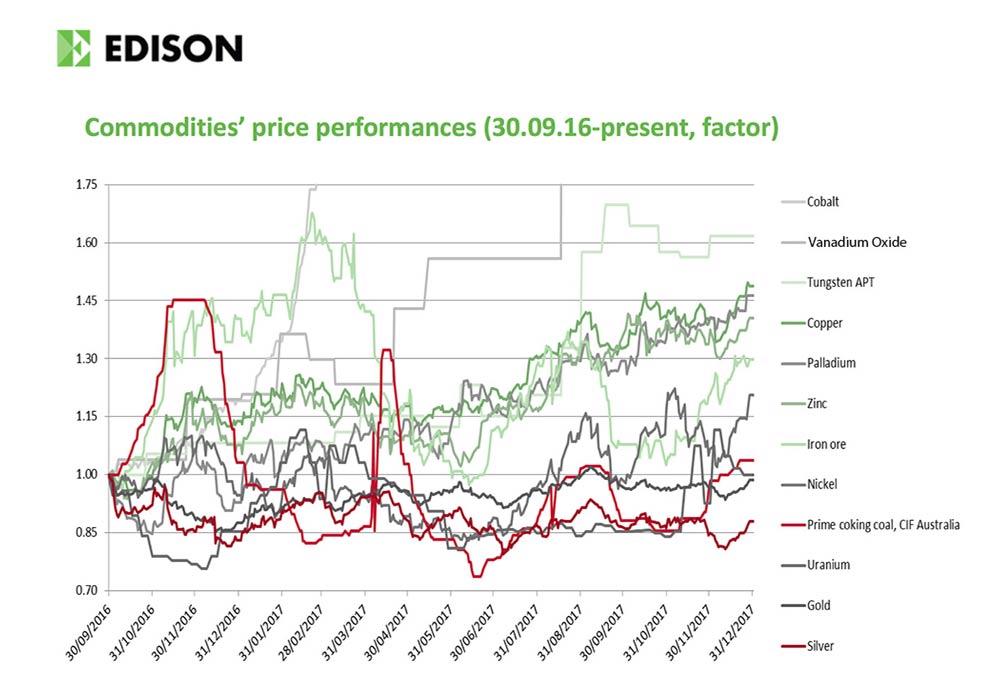 However, even gold climbed more than 10%, only underperforming the FTSE 100, when stocks went on a tear in the last quarter.

2018: a transitional year with positive tailwinds

Charles Gibson, of Edison Investment Research, expects 2018 to be a transitional year, as the impact of the financial crisis continues to linger. The inflation genie is back out of the bottle, and the US Federal Reserve (Fed) is trying to put it back in. How commodities fare depend on how that develops, as well as geopolitical factors.

As long as economic news out of China remains good, and does not turn bad in the US, commodities will feel a tailwind, Gibson thinks. 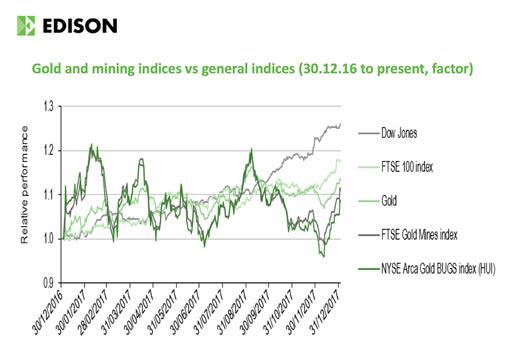 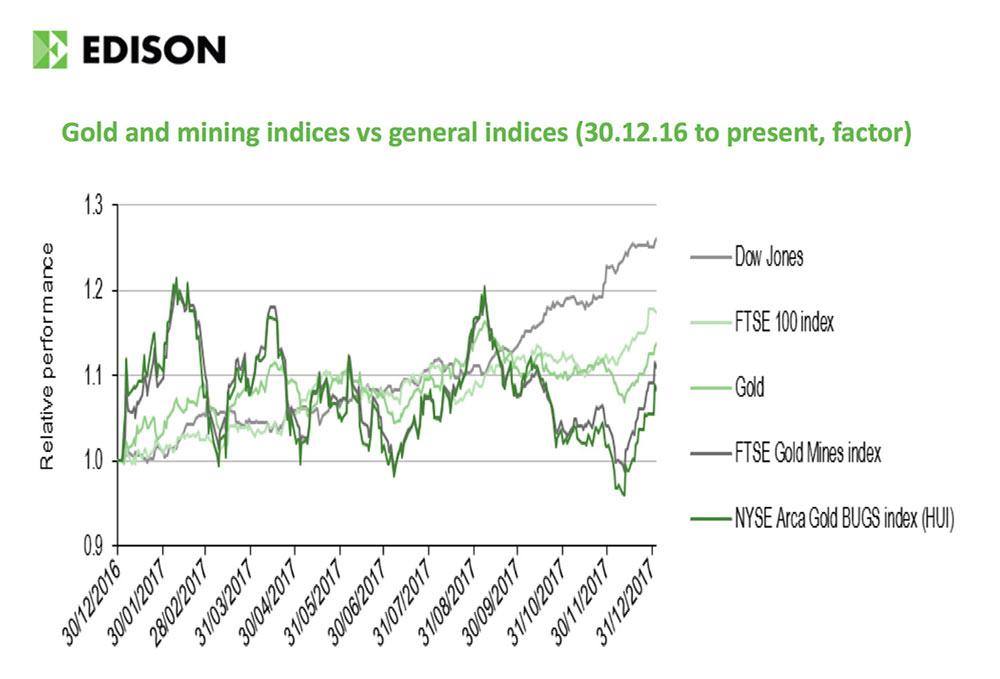 New technology, particularly new battery technology, and the move towards electric vehicles are clear factors behind some of the best performing metal prices in 2017.

Cobalt, used as a blue pigment for ceramics and glassware in ancient Egypt, is integral to red blood cell formation as a constituent part of vitamin B12. Driving its advance last year though was its uses in renewable energy systems. It can be used as part of a hard wearing magnetic alloy in wind and wave generators. Its catalytic properties allow it to split water, which has uses in developing new solar energy technologies.  It is also used in rechargeable batteries, which can power electric vehicles.

Vanadium is also useful for its alloys. Vanadium steel is more wear resistant than ordinary steel; it is a component in the cells of redox flow energy storage batteries.

Palladium, meanwhile, is a catalyst in petrol cars and has fared well. Unlike platinum, used as a catalyst in diesels, which languished down with gold and silver.

The volatility seen in some commodities was, Gibson says, down to internal policy changes in China, particularly its moves to clean its environment. This particularly affected iron ore, steel and coking coal.

Stocks skewed toward outperformance in 2017

In terms of the best and worst performing commodity stocks in 2017, there was a skew towards better performance. While few of the fallers dropped by double-digit percentages, all the top ten climbers rose more than 100%. Kazakhstan copper mining company, KAZ Minerals, rose around 160%. While gold producer, Kirkland Lake, rose to 190%, and Malaysia’s Press Metal Aluminium rose to 280%.

Gibson notes that the gearing of holding mining stocks over the metals themselves was clearly very magnified in 2017. 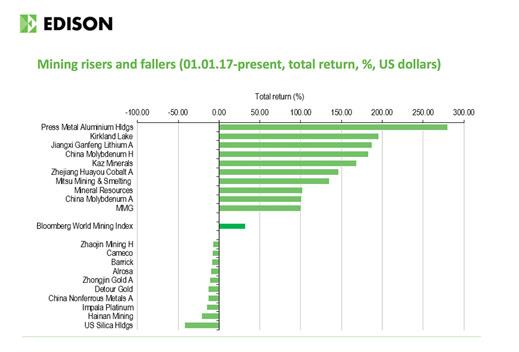 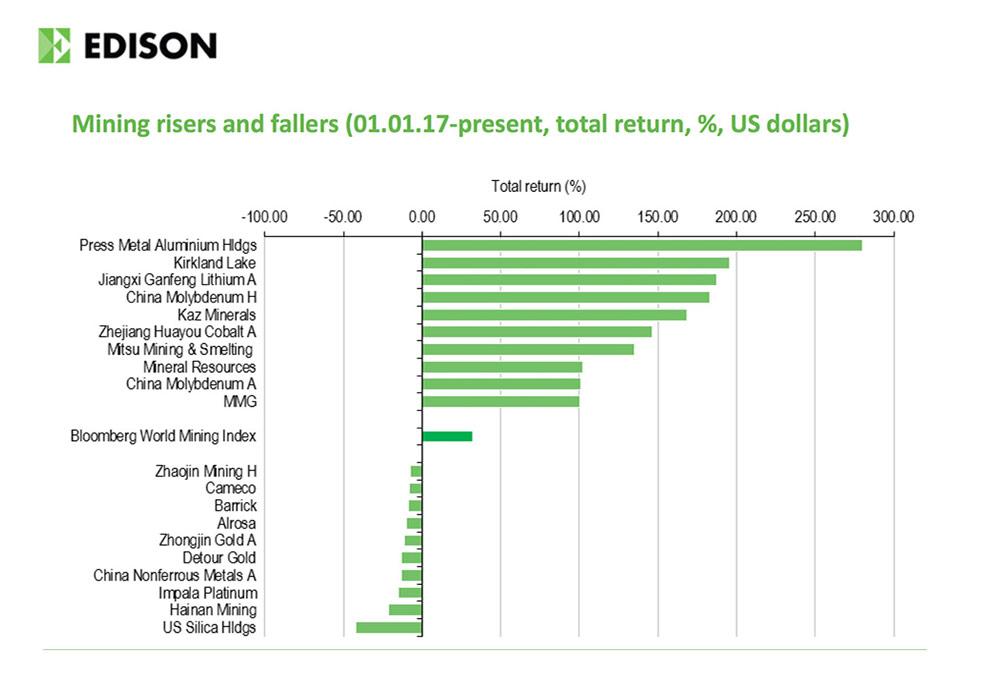