Vodafone: where next for the European telecoms giant?

Despite reporting another year of earnings growth, Vodafone shares have fallen to new lows following its annual results as investors reacted to the firm’s warnings that growth will be held back over the coming years by its heavy investment plans. So, where next for Vodafone and Vodafone shares? 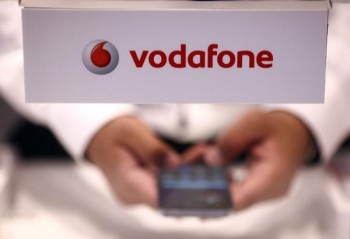 Vodafone is one of the world’s leading telecommunications companies. The company has grown exponentially over recent decades through mergers and acquisitions (M&As) and is now a leader in providing broadband and mobile services to households and businesses across its core markets in Europe and further afield.

Today, it provides mobile networks in 26 countries, 17 of which are also catered for by Vodafone’s fixed-line broadband services. It has additional access to another 49 countries where it does not hold any equity interest but is working with other companies through local partnerships.

Vodafone: built on some of the biggest corporate deals in history

Modern day Vodafone has been built on the foundations of some major M&A activity. Its successful (and hostile) takeover of Germany’s Mannesmann in 2000 was one of the biggest deals in corporate history and almost doubled the size of Vodafone to make it the largest mobile telecommunications in the world.

Then there was its acquisition of Cable & Wireless Group in 2012, which represented a big step in Vodafone’s efforts to go beyond mobile and bolster its fixed line services in multiple geographies, particularly the offering presented to businesses. A year later – and 13 years after its entry into Germany through the Mannesmann deal - Vodafone made its push into offering broadband and television services by buying Kabel Deutschland after successfully fending off stiff competition from US firm Liberty Global.

Vodafone was also responsible for making the single largest return to investors (by value), spraying them with £51 billion in 2014 after selling off its 45% stake in its US partner Verizon – the biggest mobile service provider in the US – for about $130 billion. Vodafone’s joint venture with Verizon had been in place since 1999, and had played a crucial role in Vodafone’s success. But while the acquisition of Mannessman had almost doubled the size of Vodafone, the loss of its stake in Verizon practically cut it in half.

Although the Verizon sell-off allowed Vodafone to woo investors and pay down debt, it was reluctant to part with its stake and Vodafone has been constantly rumoured as a potential takeover target since the deal because of the dramatic effect on its size. The favourite has been US rival Liberty Global, but whispers of any merger have fallen silent following Vodafone’s recent acquisition of Liberty Global’s television and broadband businesses in Germany and Central and Eastern Europe.

Diversifying its product offering is key to Vodafone’s future. The company is looking to lock in customers by selling them a variety of services, becoming an all-in-one provider of telecommunications for both businesses and homes across the world, built around the heart of the business in Europe.

Vodafone released its latest set of annual results in May, following a series of new deals being announced. Vodafone is continuing to grow and outperform its wider peers, but its investment plans (which have so far helped drive earnings growth) means that while growth is expected to continue over the coming years, it will be considerably lower than what it delivered in 2017.

So, what next for Vodafone?

Although revenue has struggled since 2015 when it delivered a sizeable jump thanks to its addition of Vodafone Italy and a string of acquisitions, Vodafone has provided material profit growth over the past three years.

In the most recent financial year (that ended in March 2018) Vodafone reported a 39% increase in pre-tax profit, despite revenue declining for the second consecutive year. Vodafone cited currency headwinds and the deconsolidation of its operations in the Netherlands after spinning it into a joint venture VodafoneZiggo.

Much of the growth in earnings is being generated organically, with organic adjusted earnings before interest, tax and amortisation (EBITDA) rising 11.8% last year to beat guidance of ‘around 10%’. Free cash flow, excluding the impact of spectrum auctions (whereby it bids for bandwidth), came in at €5.6 billion, comfortably ahead of its guidance for above €5 billion.

This organic growth is being driven by investment in its fixed broadband capabilities, supplemented by new strategic partnerships across Europe in the UK, Portugal, Italy and Germany. It also acquired Liberty Global’s cable operations in Germany and Central and Eastern Europe in May, and has started to push its Internet of Things (IoT) business, capitalising on the growing amounts of connected smart devices in our homes.

Vodafone shares have fallen to their lowest level since late 2014 following the annual results, as shown in the following chart: 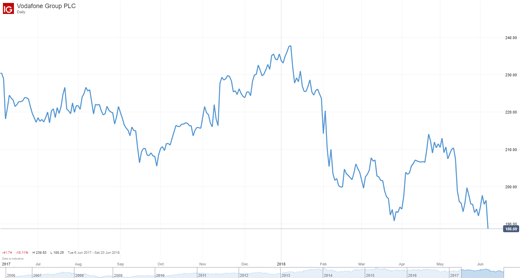 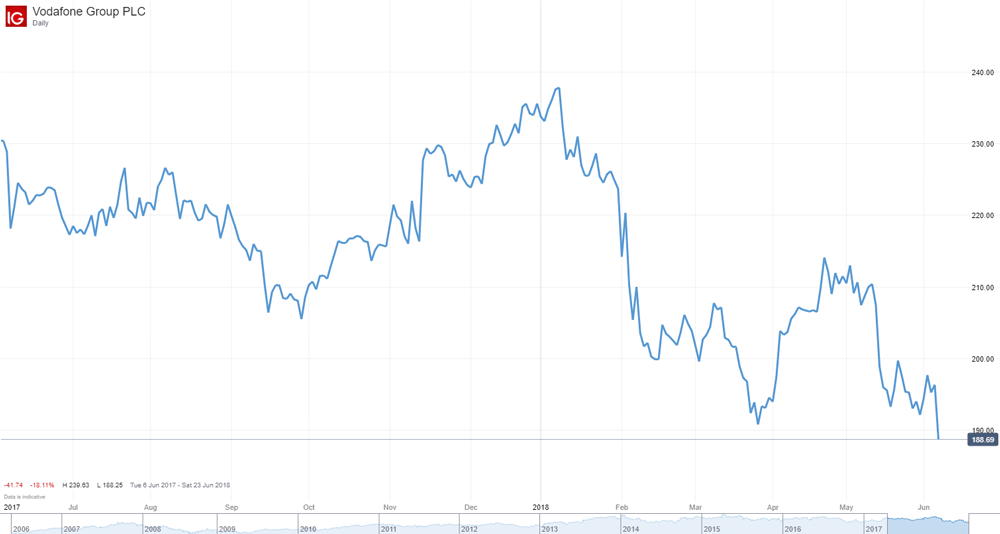 The world is using increasing amounts of mobile data. Vodafone’s data traffic soared over 60% in both Europe and its other division covering Africa, the Middle East and Asia Pacific. Vodafone has been investing to ensure it can deliver the speeds and the ability to handle peak periods of usage and says the success of this has been demonstrated by the improvement in its ‘Net Promoter Score’ (essentially a measurement of customer service and satisfaction out of 100), boasting a ‘leading or co-leading position in 14 out of 20 markets’.

Growth is also expected from its fixed broadband business that accounts for about a quarter of total revenue (and 29% in Europe), up from 22% three years ago. Vodafone expects to connect 50 million households within its European market to its Next-Generation-Network (NGN), a telecommunication packet that can handle multiple services like voice, data and multimedia. Vodafone sees the opportunity in NGN as a window to ‘capture substantial profitable market share’ and to enhance its convergence strategy by combining its fixed services with its mobile customer base. Having customers using multiple services also helps to reduce churn.

A big part of its overall ambitions involves bundling more products and services together as part of its convergence strategy, a tactic also being pursued by the likes of BT Group. Vodafone managed to add 754,000 customers by offering packages last year, with 4.5 million customers now using multiple Vodafone services.

The enterprise division that caters to businesses generates about 29% of Vodafone’s revenue (and 31% in Europe). The firm is now looking to expand its established services offering mobile voice and data services by moving into areas like IoT, cloud and hosting and other growth markets.

In Germany, Vodafone has committed to the ‘Gigabit Investment Plan’ that will see an additional €2 billion invested on its ultrafast broadband services by the end of December 2021. While the move should provide solid incremental growth and returns, Vodafone expects cash flow to experience a minimum impact through its partnership model. Around 2000 business parks in Germany will be hooked up to fibre across Germany in this timeframe, in addition to one million rural households. About 12.7 million existing customers will also see their broadband speeds increase.

In Portugal, Vodafone has struck a partnership to gain access to a further 1.3 million homes and businesses, giving it an addressable market in the country of about four million, or 80% of all households.

In Italy, Vodafone expanded its existing partnership with Open Fiber. Vodafone only provided coverage in 13 cities before announcing in April that this was growing to 271 cities, which will give it access to about 9.5 million homes, or 60% of the population.

In the UK, Vodafone struck a long-term partnership with CityFibre Infrastructure Holdings, an alternative provider of wholesale full-fibre networks. This deal allows Vodafone to market its fibre-to-the-home services to up to five million households by 2025. Vodafone claims it has identified where the first one million new households will be built in the country with initial targets in Milton Keynes, Aberdeen and Peterborough.

The most recent deal that Vodafone struck was in May with its purchase of Liberty Global’s cable assets in Germany, the Czech Republic, Hungary and Romania for €18.4 billion. The deal is significant for the firm as it allowed it to create a company equipped with enough services to encourage convergence among its customers, and one fit to be a ‘national challenger’ to the leader in Germany, Deutsche Telekom. It also adds more services to its Central and Eastern European operations, which are currently concentrated on mobile-only services. However, it will add about €3 billion of debt to its existing pile.

Vodafone’s expansion forms part of its wider ‘Digital Vodafone’ programme that is focused on capitalising on the digitisation of business, both for itself and its customers. This plan is the next step that builds on its successful ‘Fit for Growth’ programme that lowered operating costs on an organic basis for the second year in a row in 2017, playing a role in the company’s earnings growth amid subdued revenue growth. This reduction in costs is anticipated to continue this year.

‘We have made good progress in securing approvals for the merger with Idea Cellular in India – which is expected to close imminently – and appointed the new management team, who will focus immediately on capturing the sizeable cost synergies,’ – Vodafone.

Vodafone’s Indian operations reported a sharp downturn in earnings and revenue in 2017 as aggressive new competition continued to take its toll. However, last year it struck a deal to merge Vodafone India with rival Idea Cellular to yield cost and revenue synergies and to better position itself to compete. The merger excludes its 42% share of Indus Towers, which is being merged with Bharti Infratel to give Vodafone a controlling stake in India’s largest listed tower company.

‘We expect to sustain our profit growth in the year ahead, despite the arrival of a new entrant in Italy and competitive pressure in Spain, supported by the third year in a row of lower net operating costs. Our primary focus continues to be to accelerate the ‘Digital Vodafone’ programme, which we believe is a unique opportunity to enhance our customers’ experience, generate incremental value and improve cost efficiency,’ – chief executive Vittorio Colao, May 2018.

Vodafone expects free cash flow (pre-Spectrum auction) of ‘at least’ €5.2 billion this year. The anticipated drop in cash flow is partly because of the added spending as part of its Gigabit Investment Plan in Germany, which will cause an annual drag of €100-€200 million in the ‘initial years’. A further €200 million will be lost from its exit from Qatar and the shake-up of shareholding in its Indian arm.