Should you take a shot on spirits or bet on beer?

Distillers and brewers are battling against lower consumption in mature markets by improving the diversity and choice on offer, chasing value over volume, while catering for the evolving tastes of the ever-growing middle class in emerging markets. We look at the investment case for alcohol producers. 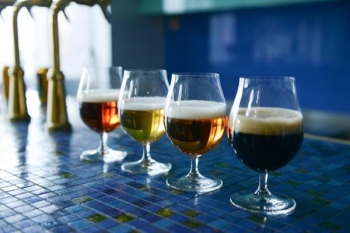 While parts of the alcohol industry have come under increased pressure over recent years, sparking a wave of consolidation among the likes of pub operators, distillers and brewers have proven to be resilient in both bull and bear markets, with strong market fundamentals sustaining demand for a tipple.

This non-cyclical industry is driven by potentially addictive products, with consumers raising a glass to cheer the good times or to drown their sorrows when the going gets tough. Generally, the greater economic wealth of a country, the more alcohol consumed. As a rule, citizens of countries with the highest incomes match this with the highest level of consumption.

The World Health Organisation (WHO) estimates alcohol consumption per capita is set to remain flat through to 2025, but a rapidly growing population in regions such as Africa and parts of Asia mean overall consumption should continue to grow for the foreseeable future. At the same time, the middle class in emerging markets such as the BRIC nations – Brazil, Russia, India, and China – will continue to grow as income rises, facilitating desire for better-quality drinks which can demand a premium price tag.

Central government debt has spiralled in the years following the financial crash of 2008, representing nearly 94% of global GDP in 2015 compared with just over half at the start of the century, according to the World Bank. Income from duties and taxes on products such as alcohol are therefore becoming a more important source of revenue for governments around the globe.

In the UK, for example, where debt has risen as a proportion of GDP for 15 consecutive years to March 2017, excise duties on alcohol account for roughly £11 billion worth of income, or 1.5% of the government’s total income. Total taxes on beer in the UK make up almost one-third of the total price of a pint, and over two-thirds of the total price of a 70 centilitre bottle of spirit.

A diverse industry offering something for every investor

The diversity of companies operating within the industry allows investors to tactically allocate their money depending on the mood of the market, with the option to back firms with popular, but cheaper brands like the world’s largest brewer Anheuser-Busch InBev, or those pushing premium-priced drinks like Diageo.

But the growth in demand for the likes of craft beers and the continued fragmentation in certain sectors such as the wine market mean there are still a number of smaller stocks emerging to suit those looking for a cheaper entry point.

While the industry’s largest players are set to continue to dominate the market, this is being partially driven by bolt-on acquisitions.

Diageo continues to snap up nascent spirit brands and has sought to strengthen its position in certain markets through its country-specific strategies, such as its recent purchase of Casamigos, the fastest growing super-premium tequila brand in the US for up to $1 billion.

C&C Group, with core markets in the UK and Ireland, is prioritising surplus cash for mergers and acquisitions (M&A), focused on local expansion while keeping an open mind to larger transformational acquisitions. The firm has also diversified by taking a 47% stake in Admiral Taverns, operating over 800 pubs in England and Wales.

Stock Spirits Group is willing to expand outside of its existing markets in Central and Eastern Europe, but its first M&A deal was a €5 million bolt-on buy to bolster its vodka offering and enter the gin category in the Czech Republic, before its more recent €18.3 million investment to take a 25% stake in The Dublin Liberties and The Dubliner Irish Whiskey brands, a popular export that should help the firm capitalise on the fastest growing category of drinks in its two key markets of Poland and the Czech Republic.

But there have been larger scale deals for those with a bigger appetite for M&A, best demonstrated by Anheuser-Busch InBev’s £79 billion takeover of London’s SAB Miller, adding stable brands like Peroni, Pilsner Urquell, and Grolsch to its vast portfolio in the latter half of 2016.

Dividends and buybacks have remained reliable, and will be enhanced if M&A activity subsides

The larger players have continuously grown returns for investors, even in times of economic woe. Diageo has raised its annual dividend every year since the turn of the century, in addition to some significant share buybacks, and Anheuser-Busch Inbev kept its euro dividend flat in 2016 for the first time since its formation through the merger of Anheuser-Busch and InBev in 2008, as it looks to protect its credit rating and reduce debt after the SAB Miller acquisition.

C&C Group has raised its dividend for the past eight financial years, in addition to some share buybacks, despite its results coming under recent pressure, while Stock Spirits Group has increased its dividend every year since listing in London, including a large special payout in 2016. Both companies are committed to stepping up returns if M&A opportunities do not arise in the forthcoming years.

With the understandable exception of Anheuser-Busch Inbev following major mergers in the last decade, debt is not an immediate concern for the vast majority of the market. Diageo’s leverage of 2.0 times at the end of its last financial year gives it plenty of headroom compared to its 2.5 to 3.0 times target, with C&C Group also boasting breathing room with year-end leverage of 1.55 versus its 2.0 times target.

Stock Spirits Group’s leverage remains low at 1.16 times at the end of 2016 to support its growth plans, while many of the smaller players like Distil and Fever-Tree Drinks boast net cash positions.

How have stocks performed and what’s the outlook?

Diageo is diverse with a portfolio predominantly led by spirits but also containing beer, spread over multiple geographies. It is focused on premiumisation in developed markets and increasing exposure to spirits in emerging markets to meet the needs of the growing middle class. The company says income growth will see premium spirits become available for 730 million more consumers in the next decade, while population growth will see the legal-aged population grow by 500 million people, half of which will come from Africa and India alone. Diageo has consistently grown margins organically and expects this to continue over, at least, the next couple of years, in addition to mid-single digit annual growth in net sales and to its dividend.

What is premiumisation? The drinks industry for the past few years has been adding new flavours to traditional spirits or bringing beers into new markets and marketing them as premium brands at a higher price. It has proved a successful policy. Take the Czech lager Pilsner Urquell as an example – it was sold in its home market for years at a low price, but when SAB Miller bought the brewery, it was soon marketed elsewhere as a premium Czech beer commanding a premium price. It’s a policy being continued by new owners Asahi.

Anheuser-Busch Inbev is ideal for investors looking for a pure beer play, with seven of the top ten global brands under its belt. It is looking to raise the perception of its core lager brands in mature and developed markets while growing its portfolio of premium products, in addition to aiming for 20% of its global beer volumes to be made up of no/low-alcohol content products by 2025. The integration of SAB Miller will take time to feed through, giving it the opportunity to squeeze as much value from the deal over the coming years.

C&C Group has faced a tougher time recently due to its focus on the more mature markets of the UK and Ireland, which has seen prices and margins come under pressure. Following a recent restructuring of its manufacturing operations, the company is aiming to push its wholesale model based around its own brands in Ireland and Scotland, growing premium brands and its market share in cider in Great Britain, while improving both volume and value in established international markets and seeding new markets in growth areas like Asia and Africa. It expanded its important distribution partnership with Anheuser-Busch Inbev late last year, giving it a major backer. Margins and volumes of its core brands have fluctuated in recent years, but both have now started to improve. Its long-term view is to continue conducting share buybacks amid a lack of M&A, in addition to dividends.

Stock Spirits Group’s three key markets are Poland, the Czech Republic and Italy. The company has a completely refreshed board which undertook a strategic review that led to all production of underperforming products being stopped. The focus currently remains on turning around a competitive Polish market which, if successful and amid a lack of M&A, will see returns step up. With the final quarter of the calendar year representing over one-third of annual sales, the firm has moved its financial year-end to help improve the accuracy of forecasting moving forward.

Fever-Tree Drinks, still led by its founders, has been riding the back of the growing popularity of premium spirits and taking advantage of a fragmented mixer market in the UK. Its share price has multiplied by 13 since listing in 2014 and was up almost 90% in 2017 alone. The company has delivered staggering growth over the years with volumes, revenue and earnings all experiencing high double-digit growth while margins continue to improve. Its dividend more than doubled in 2016 and its interim payout in 2017 was hiked 95%, supported by a strong net cash position. However, its business model carries certain risk, based on outsourcing much of the business to partners. While this requires less capital and offers scalability, it also makes the firm heavily reliant on its partners.