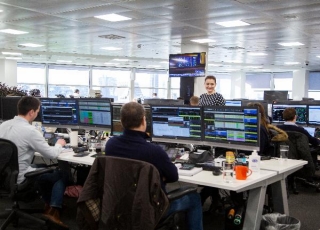 Things were looking a little bit uglier as we rolled into European trade, with some angst around the deteriorating political situation in the Catalan region and the ASX 200 call, at one stage, sat at 5859.

However, the buyers have stepped into Aussie futures as the US equity session got underway and while we start trading this morning on a somewhat drab footing we could have been down 0.6%. 0.6%, to be fair still doesn’t seem that worrying, but such is the unbelievably low volatility we are currently witnessing in so many financial markets.

Take the five-day average (true) range of our Aussie 200 index, it has traded in an average range (in the past five-days) of 40 points – the lowest range over a full session since August 2014. Fine, this is using historical data, but even if we look at implied volatility and see what the expected move in the session ahead, this sits at 37 points – so again this market is devoid of any real pulse. However, the question I am interested in is whether the buyers step in and we see a re-test and close above 5900 or whether we see traders and investors take a bit off the top ahead of the weekend and next week’s shenanigans.

The other aspect to think about is that the ASX 200 has gained for seven straight days, matching the run of form seen in April/May. Whether we can close up for the eighth day is a feat we haven’t seen since July 2016. In Japan, we are calling the Nikkei 225 to open at 21,340 (-0.5%), which, if the index closes in negative territory, would mark an end to 13 straight days of gains – the best run in 30 years!

US equity markets have closed down a touch, but importantly have found good buying off their session lows, which of course, is why SPI futures have rallied from 5839 (now 5861). If we assess price action, the S&P 500 has printed a ‘hammer’ candle, showing the bulls have driven prices nicely off the intra-session low, which is somewhat bullish in the scheme of things. Apple has found good selling and has weighed on sentiment, given concerns its sales of iPhone 8, specifically in China, will not support the sort of the revenue growth many had hoped. I guess if you are going to charge the earth for a product that has strong alternatives, then you don’t necessarily get the upgrade cycle one would hope. It’s not all doom in tech though and IBM continues to build on yesterday’s impressive rally, while Adobe Systems (ADBE) has put on 12% after strong earnings.

Recall, next week is the busiest week in the US Q3 reporting calendar, so US equity markets will certainly be worth watching, as will the Aussie financials, which as I mentioned yesterday, see ANZ and MGQ report full-year numbers next Thursday and Friday.

We have also seen a number of negative headlines from TV and news publications, notably a focus on the commemoration of the 1987 crash. Comments from the head of the PboC pushing against an impending “Minsky Moment”, but these are not reasons to sell equity or corporate credit to any great degree and we know the risks in the system, but now is not the time to act, especially after yesterday’s solid China economic data. The broader sentiment does seem to be hitting the oil markets though and we have seen US crude close -1.3%.

So overall, the bears have had the slight upper hand. We can see US treasury yields were bid for most of the session but yields have moved higher to mostly sit unchanged on the day, with traders buying the slight dip in the S&P 500. Overall, the moves in US fixed income in-turn has pressured the USD. USD/JPY looks interesting on the daily, having tested and momentarily broke through Wednesdays high of ¥113.09, but currently, finds itself 40 pips lower. It does feel as we head into next week’s US Q3 GDP print that the USD could find buyers easier to come by into that release. Specifically, I would be playing this view through USD/JPY. Of course, there has been some focus on Janet Yellen’s meeting with Trump, as part of the president’s recruitment drive for a chair of the Federal Reserve, which is to be disclosed by 3 November, but as far as I can see there hasn’t been any headlines on how this went and Jerome Powell remains the key front runner here.

EUR/USD looks set to have established a trading range of $1.1900 to $1.1700 and of course the market needs to contend with next Thursdays ECB meeting. It will be interesting to watch EUR/USD and EUR crosses into that key event risk.

AUD/USD is a touch higher on the session at $0.7861, but sits just off the highs (seen at 2:00am AEST) of $0.7884. Traders have actually been decent buyers of AUD/NZD, with the ‘kiwi’ getting a work over more broadly given Winston Peter’s, and the NZ First parties, decision to form a coalition with Labour and The Greens. The market has been worried about this outcome and this outcome is partially in the price, but it does mark the start and a new phase on concern about future RBNZ policy and the NZ economy.

Given how ‘cheap’ AUD/NZD sits relative to bond yield spreads, the technical likely to break the 2017 high (of NZD1.1144), which does open up good upside here into the NZD1.1400 to NZD1.1350 area. My preference is to take long positions into NZD1.1175 though and wait for a little heat to come out of the price.