The blind reach for yield that was so prevalent through the past week is proving a little more difficult to come by this week. 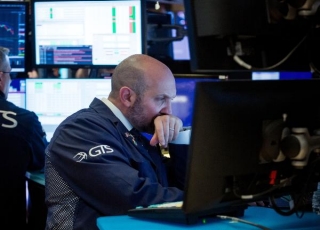 Global equities have stalled in their seemingly ceaseless advance and fundamentals are being met with a decidedly different tone than the ‘exuberence in the face of any and all news’ we have become so accustomed to. That said, global headlines so far have supported a view of growth and stability.

Particularly noteworthy for global investors was the IMF’s upgraded growth forecast for the world’s economy in 2017 and 2018 (up 0.1 percentage point a piece) as well as the ECB’s confidence in normalising one of the most expansive monetary policy efforts amid the major players. When good news doesn’t lift the markets, what are we to make of it?

Wall Street: US shares were little changed through Tuesday’s session. There was little differentiation in the day’s performance between the blue chip Dow 30, the broad S&P 500 or Russell 2000, and the tech-focused Nasdaq Composite. This reflects as a uniform restraint through sentiment, rather than particular under or over-performance by certain sectors.

Volume continues to track very anemic levels, which further degrades confidence that the markets are willing or even capable of staving off an unexpected wave of nausea. Meanwhile, the VIX Volatility Index is still north of 10 for the second day of running. These are hardly signs of an impending doom; but in a world priced for perfection, they stand as very explicit flaws in the façade.

IMF Upgrade Growth: The International Monetary Fund (IMF) has updated its regular World Economic Outlook (WEO) and the global bill of health has improved modestly. The forecast for the global economy has ticked up by 0.1 percentage points for both 2017 and 2018 – to 3.6% and 3.7% respectively. For the region’s pacing, China received a boost in its own forecasted pace of expansion to 6.8% (from 6.7%) in 2017 with the following year receiving a positive nudge.

Yet, where that may support trade hopes, the IMF’s warning over financial instability due to rapid debt growth remains. For Australia itself, the news was against the trend of improvement. The group said that owing to bad storms, it had reduced its outlook for growth this year to 2.2% from a reading of 3.0% just six months ago. The 2018 outlook received a more modest downgrade from 3.0% to 2.9%. Coming up later today, we will be met with the IMF’s Global Financial Stability Report (GFSR) which should be particularly important in our world of record high shares and record high leverage (according to rating agency Standard & Poor’s).

FOMC Still Leading the Charge: The Dollar is seeing the buoyancy provided from this particular tailwind, it is still sporting the most robust monetary policy tightening scheme amongst the major central banks. At their meeting last month, the Federal Reserve held rates unchanged but offered clear anticipation of another move before the end of the year and announced the start of balance sheet reduction, as of the start of October.

That progress started to thaw the rate expectations of the speculative masses, but the effort to close the gap from the like of the BoC and BoE (with over-wrought anticipation of the ECB some time ahead), it takes regular reinforcement. We have had plenty of Fed speak to support another hike likely in December, but the voices saying early moves thus far may create problems have doubled to two. The FOMC minutes ahead, will work with another wave of Fed speakers to put explicit intentions to otherwise rampant speculation.

Catalan Independence Dispute: Catalan President Carles Puigdemont addressed lawmakers to declare independence from Spain with a catch. From the Spanish government’s point of view, the call by Puidgement in a speech riddled with history lessons was a deferred declaration of independence. The declaration was suspended for now, so that Catalans would be able to go into negotiations with proper terms agreed upon.

The Euro charged higher through the US session, and the deferment of the call caused Bund futures to reverse lower and the EWP (Spanish ETF) to stay higher by 2% on the day. In that sense, the market was not dismayed by the development. Eyes will now be on Spanish PM Rajoy whose initial response was that Puigdemont’s “irresponsibility is at an absolute extreme.” Game on.

Australia Dollar: With the execption of the Euro, the Australian Dollar was this past session’s best performer. That is impressive considering the IMF’s downgrade for the country. For some of the pairings, the currency’s move has rendered interesting technical development.

From AUD/USD, a bounce from the well-worn pivot around 0.7725 stems the pair's slow bleed. AUD/CAD seems to be building a degree of support under 0.9700, while AUD/NZD is again marking progress towards its long-term wedge top around 1.1150. Where the Aussie is struggling, EUR/AUD has tentatively broken above a multi-year trend that has kept it moving lower.

The ASX: Aussie shares were little moved on the session as the SP51 fell by 0.02% or 1.148 points to 5738.11. Energy stocks were driver of the declines and led six of the 11 subgroups lower. For the second day, consumer discretionary subgroup was the biggest leader with 48.6% shares higher, leading to a combined 0.66% lift. Year to date, the SP51 is higher by 1.28% with the Health Index showing a positive return of 16.7% and the Telecom index lower by 31.23% as the outliers

Commodities On Tuesday, Iron ore futures pushed into the $50 level in Singapore with the most-active SGX AsiaClear contract falling 3.3% and trading at the lowest price since June. The focus has been on steel-output cuts in China that will hurt demand in the upcoming, seasonally weak winter period. The drop was less aggressive on China’s Dalian Commodity Exchange with a 2.6% drop to $61.01 with the year-to-date low at $53.36 that was traded at in June.

Last week, the National Australia Bank shared in a note their view that there’s “ample supply” in global markets, which aligns with the view from the AU Department of Industry, Innovation, and Science who said last Friday that average prices for 2018 will be $49.50 per tonne.

Oil lifted on Tuesday trading after cutting output to the lowest since January 2015, which gave further credence to the head of OPEC’s ‘Whatever it Takes’ stance.