With so many markets closed, it was really a day to forget and the leads for the Aussie open are thin on the ground. That being said, there are two distinct theme’s that need to be explored as they are key debates. 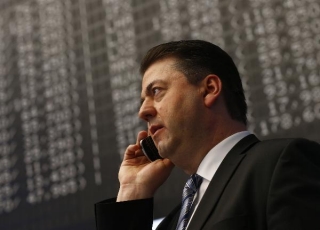 The first is a fairly mature theme and that is the strong underperformance of the Aussie financial sector, which in turn is proving to be a massive headache for those long the ASX 200. We can look at the seasonals and see that aside from last year (where the sector rallied 3.3%) the ASX financial sub-sector has seen decent losses in seven straight months of May. The average loss in May over the past decade is a sizeable 3.4% and this year is taking the prize with a fall thus far of 10.8% (in 19 trading sessions).

We are staring at the worst monthly performance of the ASX financial sector since August 2015 and only the seventh time in the past 10 years we have seen a double-digit sell-off in this space. ANZ is leading the charge with 15.5%, while the stocks to find refuge in this sector in May have been Magellan and IOOF. We can look at the ASX financial sector/ASX 200 ratio and see that the strong move higher in this ratio (and therefore outperformance from financials) from 2011 has now seen the price fall two standard deviations from the mean of this move. Statistically, this suggests that either the financials are due for a bounce, or there is to be far longer, more pronounced underperformance from the banks.

The answer to this question that will determine how the broader ASX 200 performs, and while we have seen solid gains this month from industrials, telco’s and energy, when you have a no real weighting on the market your influence on the index is limited. Look at the
ASX 200/S&P 500 ratio (currency unhedged) it traded to the lowest levels since November 2000 yesterday. We are even seeing the ASX 200 accumulation index rolling over here and trading lower by close to 4% from the all-time high printed on 1 May. So why would you buy Aussie banks when there is a nothing but negative news influencing price right now? That is the question, but let’s review this point in a few weeks time, as being long banks is the big contrarian trade right now. The sector is hugely under loved and a touch oversold. I prefer to follow the trend, but as the investment saying goes 'be greedy when others are fearful'.

It will be interesting to see how the market participants trade the banks today, given SPI futures are unchanged (as you’d expect). US crude finished up 0.3%, but oil futures have been shut for a number of hours, while spot iron ore closed up 1%. With China being closed yesterday, we haven’t had the Dalian exchange open, so no trade in iron ore or steel futures and that will be true of today as well. There is no real read through for the miners, either from BHP American Depository Receipt, as again that didn’t trade. So given the lack of any market catalyst, it really gives us a blank slate from which to assess how the market trades the banks and a far more pure reaction to sentiment.

April Aussie building approvals (released at 11:30am AEST) are expected to gain 3% in the month, but this should not cause too much of a stir. AUD/USD has traded in a 23-point range overnight and with the US fixed income market closed there really has been no real impetus for price to move. Building approvals, unless they absolutely collapse, should not cause more than five to ten point move at most.

The other key point that has firmly come onto radars is the potential for an Italian election in September. That was the discussion on the floors given Matteo Renzi’s comments on Sunday that the next election should be held at the same time as Germany’s (which is to be held on 24 September). We’ve known for a while the Italians were scheduled to have fresh elections, but they were due by May 2018, so it hadn’t necessarily come onto the radar as a trade market participants were willing to put on just yet. That seems to have changed somewhat and while EUR/USD has really moved, we have seen some real life in Italian assets, with Italian banks falling 2.5%.

Perhaps another focus from the macro community is the Italian/German bond yield spread that has widened 12 basis points to sit at 1.88%. This spread is now going to get a huge amount of attention from traders and will be a poster child of all things Italian election risk. One suspects the EUR algo’s will start having a greater focus on this spread, especially if it breaks the April level of 2.12%.

We are already hearing this event being called 'Italeave', which is a touch more creative and refreshing from just calling it 'Itix', but it promises to be talking point, even if the prospect of Italy actually leaving the euro is low.