US shares began the week in a cautiously upbeat mood, shrugging off a contentious G7 leaders’ summit over the weekend. 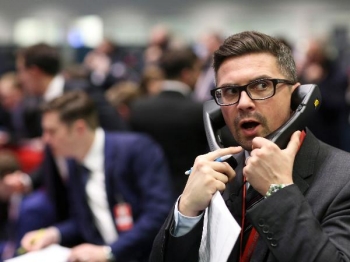 Wall Street in chipper mood despite tense G7 leaders’ summit: US shares began the week in a cautiously upbeat mood, shrugging off a contentious G7 leaders’ summit over the weekend. President Donald Trump withdrew support for a joint post-conference communique and lobbed attacks at Canadian Prime Minister Justin Trudeau and EU officials via Twitter after leaving the gathering early for a sit-down with North Korean leader Kim Jong-un. Almost all sectors comprising the bellwether S&P 500 index recorded gains. US markets’ optimistic disposition seems to follow on from the risk-on lead at the week’s trading open, where South Korea’s KOSPI led Asia Pacific shares higher after Trump said he feels “very good” about his meeting with Kim. Hopes for a rapprochement that would downgrade regional geopolitical risks are likely at work. Follow-through is hardly assured. Even if the Trump/Kim summit leads to a historic breakthrough, its practical implications for global growth are at best minimal. On the other hand, policy announcements from the Federal Reserve and the ECB due later in the week carry tremendous weight, as does the threat of a trade war between some of the world’s largest economies.

Trump-Kim summit may set new normal in the global economic landscape: A quickening of the meet-up between US President Donald Trump and North Korean leader Kim Jong-un has the markets in a hopeful state. Trump and DPRK leader-Kim are scheduled to meet at 9 a.m. local time in Singapore. While North Korea is not a major economic power on an absolute scale, the marginal gains from the reduction of constant fears about a nuclear skirmish on the globally important Korean Peninsula may boost the overall level of commercial activity. A positive step for Northwest Asian security is not guaranteed however and any evidence to the contrary is likely lead to a fresh wave of haven asset buying.

Euro gains before ECB rate decision but Draghi and company may disappoint: The euro is on the offensive at the start of the trading week as markets look ahead to the upcoming ECB policy decision. It is expected to update officials’ strategy on the €30 billion/month in QE asset purchases currently due to expire in September. The baseline view seems to envision a gradual tapering of uptake that ends stimulus expansion by year-end. Such expectations may be disappointed however as the central bank ponders slowing growth, disinflationary base effects from last year’s euro rally, shaky politics in Italy and the threat of a deepening trade spat with the US. In fact, the ECB may be keenly aware that a dovish departure from market consensus will probably produce a helpful euro drop, and setting the stage for just such an outcome. This hints that the single currency may soon find itself back on the defensive.

Pound fireworks ahead as parliament takes up Brexit, UK CPI data hits the wires: The British pound faces a volatile week ahead as parliament and the government of Prime Minister Theresa May square off on how to proceed with Brexit and the latest UK CPI data is released. Lawmakers will vote on a provision keeping the UK within the EU customs union – a move directly in conflict with Ms May’s negotiating position – and another that would give parliament the power to direct Brexit proceedings if it vetoes the divorce deal that the Prime Minister reaches with Brussels later this year. The administration hopes to defeat both motions. It is unclear whether that outcome will buoy Sterling as the UK rallies around a single standard-bearer or hurt it because a major effort to dilute Brexit will have unraveled. Meanwhile, the headline inflation rate is expected to have held unchanged at 2.4 percent on-year last month. UK data flow has mostly disappointed relative to consensus forecasts since the beginning of the year, hinting that analysts’ models are overestimating the economy’s vigor and opening the door for a downside surprise. A soft print would bode ill for the currency as BOE rate hike bets are downgraded.

Commodity traders have a unique interest in the Saudi Arabia vs. Russia World Cup game: Crude oil has been sliding on the belief that when OPEC meets on June 22 the commitment to curb production will be unwound. On Thursday, Russia will host the Saudi Arabian Football Club. This is eight days before the OPEC meeting in Vienna, where some of the world’s largest suppliers will decide whether holding back production to help stabilize the market will continue. Crude oil bulls fear a jump in output from the OPEC-led group of suppliers will come alongside swelling US production to quickly refill inventories and weigh down prices. Meanwhile, BHP Billiton Ltd. will continue negotiate wages with workers at Chile’s Spence copper mine, the world’s biggest. Initial reports from the local labor union suggest BHP may be set to accept demands of a one-time bonus and wage increase.

Australian dollar down trend may be resuming after rejection at former support: AUD/USD recoiled downward following a retest of former support guiding the rising trend from January 2016, a barrier broken in late April. The downswing hints that the move higher from support near the 0.74 figure recorded over the past month is corrective in the context of a longer-term decline. Confirmation of bearish trend resumption is still pending however. That requires a daily close below counter-trend line support defining the series of higher lows set from early May, now at 0.7510. Doing so would then pave the way to retest the swing low at 0.7413. A confirmed breach above 0.7717 is needed to invalidate the broadly bearish bias.

The ASX is set to jump sharply to start the holiday-shortened week: Friday saw a drop of 12 points to close at 6045.18 or -0.2%. Traders are keeping an eye on the 6,130 level, which price bounced off on in January and May. A break above that level would likely indicate a resumption of the gains experienced since early April. Overnight trade shows shares of BHP & Rio Tinto are set to open higher.