Following an extended holiday weekend for the United States and the United Kingdom, equity markets in the west were forced into a nasty spill through Tuesday’s session. 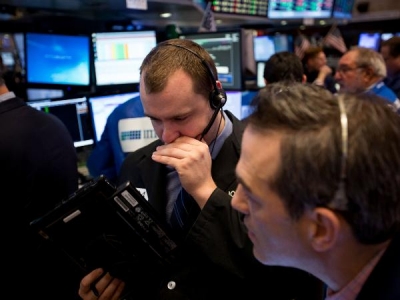 Wall Street caves to the broad risk aversion pressure: Following an extended holiday weekend for the United States and the United Kingdom, equity markets in the west were forced into a nasty spill through Tuesday’s session. This is not  the first sign of risk aversion that we have seen of late. There was a notable swoon for global capital  markets through the second half of the past week, but there seemed a firewall of skepticism for the US. That partial enthusiasm fell this past session with the Dow down nearly 2 percent and S&P 500 around 1.5 percent off in afternoon trade. While these moves are still – in aggregate – far more restrained than what we have seen in some key European and Asian indices, the US markets are starting from far more restrained highs. Will these benchmarks make a clear move to the make-or-break milestone of the 200-day moving average? That may depend heavily on what is motivating the drive. These past few days, we have seen the US President push forward with a $50 billion intellectual property tariff on China and the Italian debt fears spread. The first has proven too convoluted to stoke consistent fear and the latter could readily be deemed too advanced to represent a global crisis. Yet, a healthy sense of skepticism is important to maintain in confused markets.

European debt risks once again seen as a global risk: Over the weekend, the Italian Prime Minister-designate Guiseppe Conte abandoned efforts to form a government following President Sergio Mattarella’s rejection of a vocal Euro skeptic as the Economy Minister. Either outcome could have proven the source of fresh crisis for the Euro-area. If Paolo Savona were given the nod, it would have raised the risks that the Italian government would have pushed the anti-EU and anti-euro views the two parties of the coalition (5-Star Movement and League) had promoted on the campaign trail. Alternatively, rejecting the choice risked putting the country back on course for another vote – along with the uncertainty and international concern for debt sanctity that carries with it. It seemed the risk measured far more readily on an international basis with this development as the clear risk aversion drive was felt in more systemic havens and ‘risk’ assets. Italian yields soared and default swaps showed a surge in the risk the country could stop payment on its debt (17 percent), but it was the tumble in international stock indices and government bond yields for the likes of the US, UK and Germany that really carried impression. The stability of the Eurozone is not global investors take lightly as it represents the largest collective economy in the world.

Crude oil drops with stocks, gold struggles to capitalize in risk-off trade: Sentiment-linked crude oil prices succumbed to broader risk-off capital flows, sinking alongside US shares as concerns about political turmoil in Italy continued to drive liquidation across the major asset classes. The spread between Italian 10-year bond yields and German equivalents – a measure of the excess risk in lending to Rome versus Berlin – jumped to the highest in nearly five years. Gold prices managed modest gains as haven seeking capital flows sent bonds higher and depressed yields, boosting the appeal of non-interest-bearing alternatives. Upside follow-through failed to materialize however as the US dollar capitalized on liquidity demand and roared upward at the expense of the perennially anti-fiat yellow metal.

Australian dollar dons its carry trade garb, retreats amid risk aversion: The Australian Dollar was broadly losing ground this past session. However, the currency didn’t lose ground versus all of its most liquid counterparts. And, it is that disparity in performance as registered versus specific counterparts that insinuates that we are seeing a response from a more risk-oriented currency. The Aussie Dollar has taken a notable hiatus from its status as carry currency thanks to the drain in its own yield, the rise of the US baseline return and a broad moderation of risk trends. The intensity of risk aversion must be significant indeed if this currency is returning to this more traditional role with the other factors generally unaltered. An eye should be kept on AUD/JPY and AUD/USD in particular to register exactly how intense the sentiment winds are blowing.

S&P/ASX 200 vulnerable amid global risk aversion: Australian shares managed a modest increase Tuesday – diverging from broader risk aversion that sent the MSCI Asia Pacific stock benchmark down 1.2 percent – as losses in telecoms and IT names were offset gains in the overweight financials and materials sectors. The moves appeared to be driven by corrective flows following prior losses and individual company performance. Lithium miner Galaxy Resources was a standout, gaining 14.4 percent after securing a deal to sell Argentinian tenements to South Korean steelmaker POSCO for $371 million. Macro forces look set to overshadow such catalysts however, with SPI futures pointing sharply lower ahead of the opening bell in Sydney. Worries about political instability in the Eurozone have routed in Europe and the US, with the Euro Stoxx 50 benchmark losing nearly 1.6 percent and the S&P 500 down almost 1.2 percent.

Economic forecasts due for China and the world:  Interpretations of economic updates are shaded by speculative bias. When markets are naturally optimistic, we often see concerns more readily discounted while the positives are promoted. Of course, the opposite is also true. Given our start to this trading week, it may be a bad time to register a broad assessment of economic stability with anything but a comprehensive enthusiasm. And yet, that is exactly what we face today. On deck, we are due the OECD’s global economic forecast updates. The group’s Secretary-General Jose Gurria in an interview Tuesday suggested that nearly three-quarters of its members’ governments are basing their fiscal policies shaped by economic activity – and vice versa – on some sort of stimulus. More troubled forecasts (which this group is more prone towards than some of its counterparts) could add to the troubled outlook. A more targeted update should also be on our radars: the IMF’s Article IV review of China. This third party evaluation of economic and policy health for the notoriously data-obfuscated country could give insight into risks that markets have only been able to speculate upon.

Canadian Dollar may fall as the BOC rhetoric turns more dovish: The Bank of Canada is expected to keep its benchmark lending rate unchanged at 1.25 percent when it delivers a policy announcement Wednesday. The priced-in probability of an increase as implied in OIS rates stands at just 16.4 percent. At least one 25 basis point increase continues to be expected before year-end however, with markets assigning a slightly better than even chance of seeing tightening as soon as July. That will put the spotlight on the guidance offered in the statement accompanying the announcement. A dovish lean echoing a run of soft economic data since April’s conclave, continued uncertainty about the fate of NAFTA and the recent plunge in crude oil prices might push stimulus withdrawal further into the future and weigh on the Canadian dollar.