What metals are needed for electric vehicles and battery storage?

Demand for batteries is growing as the world transitions toward electric vehicles and renewable energy. But what metals are needed and what companies are mining them? We speak to John Meyer, partner and mining analyst at SP Angel, about how investors can gain exposure to the space. 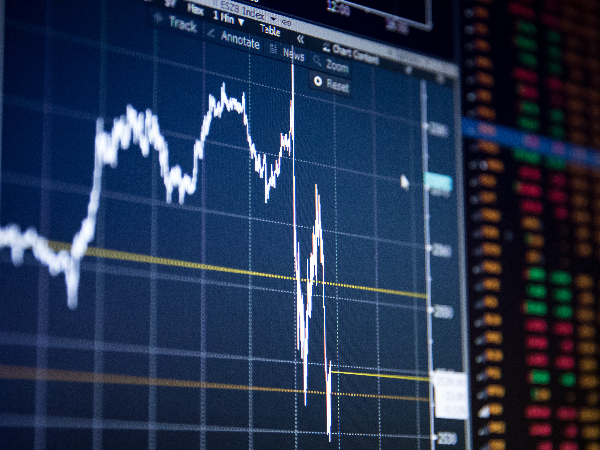 There is no doubt that battery demand will significantly rise over the coming decades, spurred on by the growth in demand for existing products like electronic devices and smartphones, as well as newer technologies (mainly electric vehicles and energy storage).

This will drive higher demand for a number of metals, which will also accelerate as the cost of developing new batteries declines as time goes on. The speed at which demand for some metals is increasing, twinned with tighter supply, has been very beneficial for commodity prices and many miners are racing to bring more online to meet the forecasted lifts in demand over the coming years.

IGTV's Jeremy Naylor spoke with John Meyer, partner and mining analyst at SP Angel, who outlines how the emergence of electric vehicles, energy storage and other factors will drive demand for certain metals going forward.

Demand for electric vehicles to grow over coming decades

‘We will not stop until every car on the road is electric,’ – Tesla founder and chief executive Elon Musk.

The electric car market will move from early deployment to mass market adoption over the next ten to 20 years. A total of 750,000 new electric vehicles (EVs) were registered worldwide in 2016, when the global stock of EVs surpassed two million for the first time. The US accounted for the largest portion of global EV stock until 2015, when China surpassed it with about a third of the global total.

Some countries have already emerged as leaders in the EV space. Norway had the highest global market share in electric vehicles in 2016, while China was the fastest growing market.

The move toward EVs, as well as electrification of other transport, is set to place pressure on electricity generation around the world. However, the IEA believes the additional electricity needed to power the rise in EV demand is ‘sizeable but largely manageable’.

The IEA forecasts EVs and plug-in hybrid electric vehicles (PHEVs) will consume just 1.5% of total electricity demand by 2030, representing just 6% of the total increase in need from present levels. This is mainly because of larger lifts in demand for electricity from industry, commercial and residential sectors over the same period.

Transition to renewable energy to spur demand for battery storage

Renewable energy still suffers from one major downfall over than the likes of gas or nuclear power. Harnessing power generated by the likes of wind or solar has still not been mastered, and unless the power is used as soon as it is generated much of it is currently wasted. This also means renewable energy sources can be intermittent, unable to produce power when the wind isn’t blowing or the sun isn’t shining.

This has spurred on the development of energy storage, with many companies, big and small, creating batteries that will allow renewable energy sources to reach their full potential.

What companies are developing energy storage solutions like batteries?

There are plenty of companies developing energy storage solutions, some as a side activity and some as a core focus, and investors have a choice between big existing players and smaller stocks.

Electric vehicles and energy storage batteries: what metals are needed?

Copper, already an important metal for numerous industries, is touted as the primary metal to see a jump in demand as a result of higher demand for batteries in the future. The other three metals that will also be key are lithium, nickel and cobalt, with other metals that will be needed including graphite, manganese and vanadium.

Let’s take a look at those four crucial metals, the current supply and demand, where they are produced, and what companies are mining them.

What countries produce the most copper?

Chile has long been the biggest producer of copper in the world, producing more than double than the second biggest producing nation, Peru. However, the amount of copper coming out of Chile has declined annually since 2013, according to Statista, while output from Peru has been steadily rising. 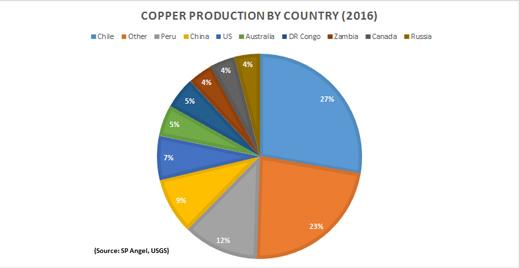 There are a swathe of big miners that have copper in their portfolio, such as BHP Billiton, Anglo American, Rio Tinto, Glencore, Freeport-McMoRan, Southern Copper, Vedanta Resources, Antofagasta, KAZ Minerals.

Currently, the construction industry is the largest consumer of copper in the world, accounting for 44% of total consumption in 2016. Transportation consumed 19% of global refined copper, followed by electric and electronic products at 18%, consumer and general products at 12%, and industrial machinery and equipment at 7%.

What countries produce the most lithium?

Australia has been the largest producer of lithium since 2013, with output climbing annually every year since. Production saw a particular spike in 2016, after surging 30% from the year before. Lithium output in Chile rose by over 17% year by year in 2016, while Argentina has also seen a healthy level of growth over the past four years. 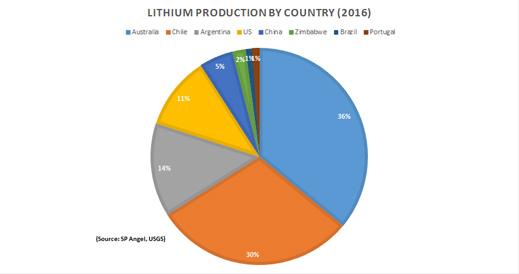 More: lithium rise to persist as electric vehicles take to the air

There is already a substantial demand for lithium in traditional battery markets, used for the likes of smartphones and electronic devices (for example). Batteries consumed 29% of all lithium in 2016, while 27% was used to create glass and ceramics. Industrial greases consumed 12% of global lithium that year, followed by air treatment at 5% and polymer and medical uses each accounting for 4% of global consumption.

What countries produce the most cobalt?

Worldwide cobalt production is currently heavily concentrated in the Democratic Republic (DR) of Congo, which currently produces about ten times more cobalt than any other country. Although cobalt output dipped in DR Congo in 2017, production was still about one million tonnes higher than back in 2013.

There has not been any notable growth in output from any country over recent years, but the likes of the Philippines and Papua New Guinea have only been producing notable levels of the metal since 2016.

Big names in the cobalt space include Glencore and Vale.

What countries produce the most nickel?

The Philippines may be the single biggest producer of nickel, but output has been declining in recent years after the government ordered multiple mines to shut down by early 2017 for breaching laws and regulations.

Nickel is produced from two types of deposits. In 2016, 62% of global nickel production came from laterite deposits with the other 38% coming from sulphide deposits.

Based on the values of imports, China is the single biggest consumer of nickel, having accounted for 23% of global consumption in 2016, followed by the US at 9%. Other major consumers included Japan at 8%, the Netherlands at 6%, Germany at 6%, and the UK at 5%.

The primary use for nickel in 2016 was in the creation of stainless and alloy steel products, accounting for 68% of consumption. Other major end markets that year included non-ferrous and super alloy manufacturing consuming 16% of global nickel, followed by electroplating at 9%, casting at 3%, while batteries consumed just 3%.