How to invest in solar power

With solar energy expected to generate 25% of global electricity by 2050, it offers a significant growth story. Here are some ways to access this increasingly important technology. 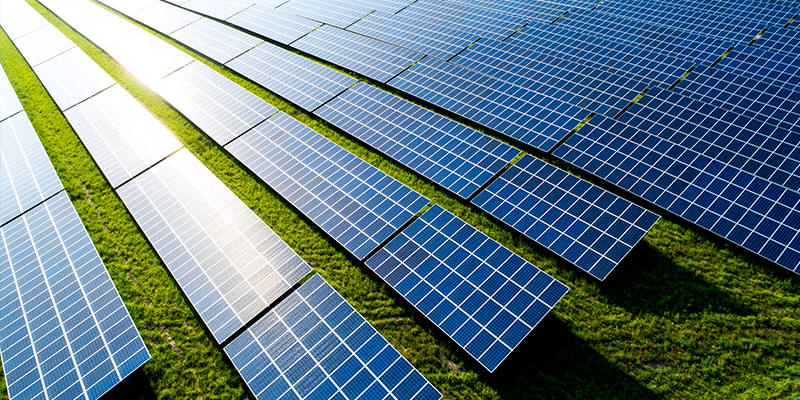 What is solar power?

Solar power is energy harnessed from the sun’s rays and converted into electricity. Solar PV refers to photovoltaic technology, which is how sunlight is captured using semiconductors in solar cells, many of which make up one solar panel. Solar PV will generate 25% of all electricity globally by 2050, up from 2% today, according to Bloomberg New Energy Finance.

Companies involved in solar power tend to be either makers and distributors of these solar panels and cells, installers of solar infrastructure, or more niche manufacturers of specific components used in capturing solar energy.

How much is the solar power market worth?

The appetite for clean, renewable energy sources is set to be an enduring one. A report from DNV GL found that electricity consumption will more than double by mid-century to meet 45% of world energy demand, and solar and wind energy will supply more than two-thirds of that electricity.

With such huge potential, it’s no wonder the world’s largest energy companies are getting in on the act and have been investing heavily into the renewables space including solar in the last two years. Shell allocates $1 billion-$2 billion each year to new energy solutions, and has a major stake in solar developer Silicon Ranch, while both BP has bought in to Lightsource and Total has backed SunPower.

With rising demand and the cost of production getting cheaper, the solar power industry looks set to shine bright, although there are some potential headwinds such as the threat of US-China trade tariffs. Returns have been disappointing from some solar investment vehicles: the MAC Global Solar Energy Stock Index, for example, is down more than 10% over five years, so it pays to select your investments wisely. Here are four stock ideas for investors wanting to plug in to the solar growth story.

One of the UK’s largest listed solar power funds, the Foresight Solar fund aims to deliver a sustainable quarterly dividend by investing in ground-based solar assets, with around 50 assets in the UK and four in Australia. It has benefitted from government subsidies for solar energy in both markets. Since its 2013 initial public offering (IPO), the investment trust has more than tripled in size and raised more than £510 million through share placings. Last year an oversubscribed equity placing helped fund new acquisitions of UK projects. With a market cap of £626 million and a dividend yield of 5.8%, the trust’s shares are trading at 114p, a 5% premium, according to data from the Association of Investment Companies (AIC). The trust delivered a share price total return of 44% over three years, in line with the peer group.

This £474 million solar energy investment trust has 46 projects across England and Wales in its investment portfolio, including PV plants, both micro and large-scale, and rooftop assets, which performed ahead of management expectations last year, according to investment trust analysts Numis. Strong earnings growth underpin the highest dividend yield in the sector (6%) and should help the trust maintain a premium to peers, Numis added.

Over three years the trust has delivered 55% to investors, compared to a 44% average return from the IT Infrastructure – Renewable Energy sector, according to FE data, ranking it in the first quartile. The share price is up 13% over the last 12 months, and the trust is currently on a premium of 14%, according to the AIC.

Nasdaq-listed First Solar is a US manufacturer of solar PV panels using thin-film rather than silicon technology, and it is this technological innovation which sets it apart from competitors. Headquartered in Arizona, the company has a market cap of $5.4 billion and its revenues for 2019 are forecast to be more than $3 billion.

Shares are trading at $51, down from $68 one year ago, and significantly lower than its 52-week high of $82, suggesting the stock may have been oversold.

California-based SunPower designs and makes silicon PV cells and solar panels. It is majority owned by France’s Total, one of the world’s largest energy companies. SunPower announced last month it is fundraising and looking for strategic partners in order to expand its solar panel manufacturing and invest in technology in the face of aggressive pricing in the industry. With a market cap of $888 million, the company has restructured its debt and cut costs in the last two years in a bid to improve its 2019 financial performance. Shares are trading at around $6, against a 52-week high of $10, leading some analysts to tip it as a strong buy.