Chinese shares: should you increase the amount in your portfolio?

China currently makes up 2.9% of MSCI’s All Country equity index. This seems low, given its economy accounts for 16% of world GDP and that Chinese companies make up 10% of the world’s stock market capitalisation. The imbalance is due to the under-representation of China 'A-shares' in the index, which is something that benchmark originator MSCI plans to change soon. 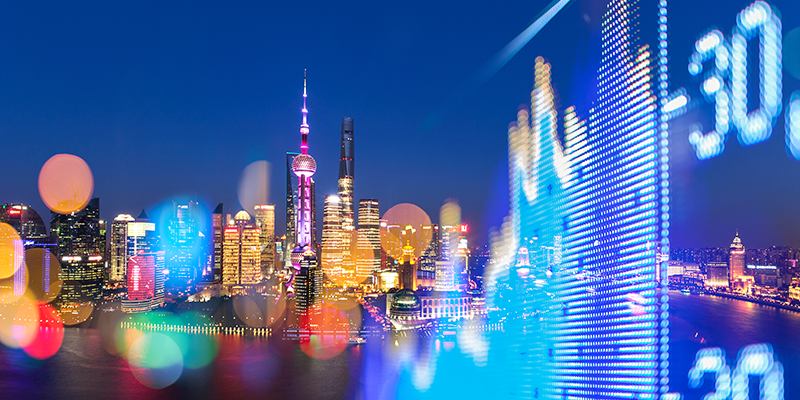 In investing circles, you may regularly hear people say that 'diversification is key' or 'it’s important to own the world'. What these expressions imply is that by spreading your investments across different assets classes and regions of the world, you have the power to reduce your risk whilst potentially unlocking higher returns.

Investors seeking a truly global portfolio at minimal cost would be wise to create such a portfolio using exchange traded funds (ETFs). These are low-cost and hold hundreds, sometimes thousands, of companies from all over the world. However, investors using these ETFs may find that they are under-exposed to the largest economy in the world.

Is China under-represented in global indices?

The IMF and World Bank both rank China ahead of the US as world’s largest economy based on purchasing power parity (PPP). This methodology measures gross domestic product (GDP) using the exchange rate that is required to purchase $100 of the same basket of goods and services in each country. As of October 2018, China contributed 19% of world output while the US made up 15%.

In contrast, China’s equity market remains less developed than the US stock market, making up 10% of the world’s market capitalisation, versus 39% for the US. However, China only makes up around 2.9% of MSCI’s world equity index (known as MSCI ACWI) while the US takes 54%.

We looked at SPDR, MSCI ACWI, IMI, UCITS, ETF (ACWI) to see whether Chinese companies are indeed under-represented in the global index. At first glance, the name of this ETF could well have been the serial code on your fridge, but in ETF language it describes how it invests in companies from across the developed and emerging world.

Below is a deconstruction of its name for the uninitiated:

ACWI holds over 2400 companies from 47 different countries, has over £1 billion in assets and charges an annual management fee of 0.40%. Analysing ACWI’s holdings reveals that Chinese companies make up just 2.9% of the fund.

Big Chinese tech names such as Tencent (0.56%) and Alibaba (0.35%) are some of its largest Chinese holdings but are often listed on overseas stock exchanges such as the New York Stock Exchange (NYSE) and Hang Seng.

Because MSCI ACWI is a capitalisation-weighted index, companies like Tencent (which owns WeChat) and e-commerce giant Alibaba have weights in the index that are proportional to their free-float market capitalisation. Tencent, therefore, has a similar weight to its US-equivalent Facebook (0.71%), while Alibaba holds a position that is a quarter of the size of Amazon (1.5%).

Where the actual shortfall stems from is MSCI’s current choice of underweighting a number of Chinese 'A-shares' and excluding many of these shares altogether.

China A-shares trade on the Shanghai and Shenzhen stock exchanges and were historically only available to mainland citizens. However, since 2003, qualified foreign institutional investors (QFII) have been able to buy and sell these shares.

A major step forward in opening up Chinese stocks to international retail investors came on 1 June 2018, when MSCI added 234 A-shares to its global indices, including the likes of China Construction Bank, PetroChina and Ping An Insurance Group.

However, MSCI currently has a 5% inclusion factor on these stocks, which means that MSCI take just 5% of each company’s freely floated market cap to calculate its individual weight in the index. But in September 2018, it announced that it was looking to increase the inclusion factor to 20%. MSCI estimate that this move could add around $66 billion in new foreign investment.

MSCI also revealed plans to include more mid-sized Chinese companies in its global benchmarks, which would double the number of Chinese shares included in its global index. There are over 3000 listed Chinese companies, so the scope for increasing the number of stocks, as well as further increases to the China inclusion factor, could mean that international demand for Chinese stocks increases substantially in the future.

If index creators do choose to increase China’s weight to better reflects its true economic power, the index inclusion effect could therefore provide a boost to Chinese stocks.

Separately, another potential tailwind for Chinese stocks is if the People’s Bank of China (PBoC) choose to use the stock market as a tool to stimulate domestic consumption, which slowed over 2018 and as a ratio to GDP, remains one of the lowest amongst major economies.

It is reported that while more than 90% of China’s stock market is owned by domestic investors, less than 10% of the population invest in domestic equities. This insinuates that while this type of policy may provide a boost to equity prices, it is unlikely to be successful in revitalising consumer spending; a trend observed across the majority of developed economies that deployed their own form of monetary easing in the aftermath of the 2008 financial crisis.

How to buy China A-shares?

Investing in ETFs is a cost effective way to gain broad exposure to a certain stock market. If you do want to increase your exposure to Chinese companies, there are a number of ETFs which track the China A-shares.

Here are just a few ETFs that investors can use to gain exposure to Chinese companies: