Wall Street has so far posted strong gains for the session, led by a catch-up run from the Dow Jones 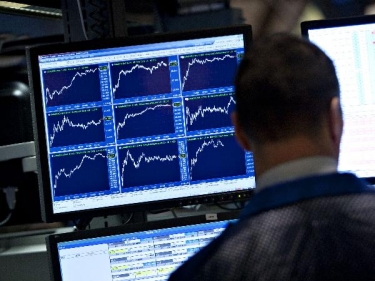 Global shares performed well overnight, benefitting it seems from the relative silence regarding trade wars. Traders have taken the opportunity to focus on the upcoming reporting season, and some of the more positive stories expected to flow from that. Wall Street has so far posted strong gains for the session, led by a catch-up run from the Dow Jones; while European shares also experienced strong buying despite unfolding Brexit drama in the UK, with both the DAX and FTSE closing higher for the session. The dynamic creates a favourable lead for Asian markets this morning: strong activity in commodity prices and materials stocks, coupled with a modest push higher in oil prices, could prove quite ASX friendly. SPI futures are suggesting a 25-point rally at market open, as Aussie stock watchers prepare for another extension on the ASX’s decade long highs.

Scanning across price action last night: a resumption of higher risk appetite began to manifest across asset classes. Commodity prices managed to arrest their sell-off, as both aluminium and copper clock around 2 per cent gains. US bond yields have climbed because of reduced volatility, and the USD has drifted higher, although both assets are quite some way off recent highs. Gold has benefitted consequently, testing the $US1260 mark overnight. Oil prices pushed around 1% higher courtesy of a return to fundamental drivers and fears of under supply. Finally – and to counter some of the good news feel of the last 24 hours – emerging markets are still showing signs of stress, presenting an important reminder of the increasing risk environment in markets.

The ASX200 kicked off the week well, closing trade today at 6286 –  another new 10-year high. The ASX briefly rallied beyond the symbolic 6300-mark, as traders rotated out of defensive stocks into the ASX’s heavyweights. Profit taking took hold above this point it would appear, pushing the ASX to around what was its closing price by afternoon trade, in what was a reasonably tame day. Having broken (albeit briefly) new ground above 6300, interest will be now how a very broad upward trendline resistance level holds. If it doesn’t, perhaps the indication is of more record gains to come, given that resistance levels ahead seem to be rapidly diminishing.

Material stocks took their turn to lead the charge yesterday, rallying 1.1 per cent throughout the session, largely thanks to some considerable activity in BHP and Rio Tinto. This was especially true for BHP, which closed trade 2 per cent higher, courtesy of a news release that revealed BP will launch a $10bn for the company’s US shale assets. Not to be entirely outdone, the banks continued their run higher, as the financials sector added 0.25% per cent. The CBA was again the major driver in the space, although it was amply supported by plays into Westpac and the ANZ. Unlike Friday’s trade, however, there were some noteworthy laggards today. The industrials were weighed down weakness in those stocks globally, while the energy sector gave up ground following a dip in oil prices.

Brexit dominated the newswires, following news out of the UK that the May Government’s Brexit Secretary David Davis has resigned over dissatisfaction about the British government’s direction in Brexit negotiations. The story developed further this morning, with the original face of Brexit, Boris Johnson, stating his desire to resign as Foreign Secretary. The news came only 48 hours after Prime Minister May announced her government has agreed on an appropriate plan to exit the European Union. The story led the GBP/USD to reverse its short-term shift higher, as fresh doubt enters the minds of analysts about the solidarity of the May Government, and hence the strength of the GBP. If further divisions emerge over the coming days and weeks, watch for further selling of the GBP, with the CHF and EUR possibly standing to benefit from any risk off play.

Asian markets kicked off the week on a positive note, seemingly resuming the relief rally that characterized trading at the end last week. The Shanghai Composite rallied 2-and-a-half per cent, the Hang Seng clocked gains of 1.3 per cent, and the Nikkei has pushed over 1 per cent itself. The news flow was low in Asia, with the biggest story revolving around a speech delivered by BOJ Governor Haruhiko Kuroda, during which he reaffirms he and his team’s commitment of keeping accommodative monetary policy settings until the bank’s 2% inflation target is reached. The JPY/USD has thus far proven unresponsive to the news, seemingly wedged by sell-forces in both individual currencies.

The AUD/USD has broken trend, breaking through the top of a channel good since the middle of June, to trade being trading above 0.7460 at time of writing. The move for the pair is USD-weakness inspired, and began after what has been judged (on balance) a softer Non-Farm Payrolls report. While the longevity of this swing is difficult to predict, the likelihood of ongoing strength in the AUD/USD is rather doubtful. However, in the short-term – and provided a risk-free run – an imperfect and loose indicator of the extent of this rally could lie in US Dollar Index: the last time the index was this low, the AUD/USD managed to trade around 0.7560.