It’s beginning to appear that the Trump Administration’s threats of tariffs and trade-warfare are less negotiating tactic and more outright policy, with global markets falling overnight. 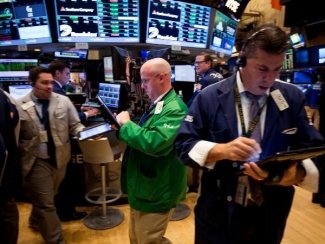 The Australian sharemarket is poised to follow suit, with futures pointing to a 56-point, or 0.9 per cent drop at the open.

Trade jitters: It’s beginning to appear that the Trump Administration’s threats of tariffs and trade-warfare are less negotiating tactic and more outright policy. Investors have soothed themselves (it seems) in recent times that US President Trump’s aggressive trade stance amounts to little more than a hard-headed business tactic pulled from The Art of the Deal. As news releases and Tweets continue their flow from the White House, this point of view is looking less credible – or at the very least, not cogent enough for traders to risk their money on.

Market turmoil: Markets buckled yesterday following the new developments in the unfolding trade war, with global equities selling off across the board. Of the major share indices, the DAX faced the worst reckoning, falling in the realm of 2.5%, led lower by materials stocks. It was a similar fate for the FTSE100, which shed around 2.3%, with the materials and energy sectors each dropping ~3.00%. The activity set a pessimistic lead for US shares, which were already pointing to a drastically lower open in futures markets throughout the day. It appears major US indices remain poised to wipe out effectively all of June’s gains, with the S&P and DJIA both pointing to losses of around 1.3%.

Nasdaq hit: Technology stocks have been the worst hit in the North American session, erasing a good part of their recent rally, with the tech-heavy Nasdaq giving up over 2.00%. The developing trade conflict is beginning to revolve around the tech-space, as the Trump Administration seemingly attempts to strangle China’s ambition of becoming the global tech powerhouse as outlined in its Made in China 2025 policy.

How this will affect tech stocks globally is a point of fascination for investors, particularly given how mobile and dynamic the sector can be. Although it’s too early to tell, the focus of this trade war may be moving away from tariffs, and towards foreign investment itself.

ASX: The ASX200 will open lower today, as Australian shares finally look to be falling into line with global themes. Having bucked the trend for most of last week, thanks to a recovery in bank stocks, SPI futures are indicating a tumble in the local market of more than 1% this morning. This will take the ASX right through a key level of support/resistance at 6150 – which the index spent much of the early part of last week fighting with – to trade a fraction above another key level around 6090.

Attention now will shift toward whether the ASX can hold onto its recent hard-fought gains, the result of which saw the index climb to decade long highs. Considering the fundamental backdrop and the relatively feeble levels of support, a fall in Australian shares in line with global markets may become more likely throughout the day.

Greenback feeling the pressure: Risk haven plays were rife overnight, as investors sought shelter from the volatility. Interestingly, despite this risk-off play, the USD – which pulled back over the weekend after touching 7-month highs last week—remains under pressure, with the DXY falling below the 94.00 handle for the first time since the Fed hiked rates two weeks ago. The EUR/USD (which is the most heavily weighted per in the DXY) continues to move against trend, rallying 0.4% to trade above the 1.17 handle.

A story has yet to become entrenched in markets explaining this USD weakness yet, but perhaps all this hostility from President Trump is beginning to derail trader confidence in the US economy, and as such the Fed’s ability to sustain its rate hiking cycle.

Aussie dollar trouble: The increased tension in markets naturally undermined the Australian Dollar, with the local unit tumbling across the board. The AUD/USD struggled to maintain momentum during yesterday’s Asian session, spending much of the day grinding against the bottom of a downward trend channel.

The panic in markets overnight proved too much for the AUD, which finds itself trading 0.8% and 0.5% versus the safe-haven EUR and JPY, respectively. To this point in time, given the backdrop of growing global growth risks and an increasing yield disadvantage, the AUD has fared well to produce some modest gains over the last few days. Considering the heightened tensions overnight, however, look for further falls in the AUD as 0.7372 support again comes into play.

Commodities slump: It’s been a tough trot on commodities markets of late, but one commodity that has somewhat moved against the trend is iron ore. Current prices for Dalian Iron Ore show that the base metal is sitting just below levels last traded on June 14 – the date of which saw the release of tremendously weak Fixed Asset Investment data out of China. That release amplified concerns that the Chinese economy may be heading for a slow-down – and therefore a reduction in demand for iron ore.

Amidst deteriorating US-Sino trade relations, iron ore may be preparing for a retracement, given relatively significant Chinese Manufacturing PMI data at the end of the week. Another sell off in iron could be on the cards if these numbers print below expectations and affirm the “slowing Chinese growth” story.