Argentina the latest casualty of the emerging markets sell-off

First Turkey, then Venezuela, and now Argentina. The emerging markets sell-off may not be over yet, with a rising dollar threatening to raise the cost of USD denominated debt.

The developing world seems to be on unstable ground of late, bringing sharp losses across stocks and (most noticeably) currencies. For many it is a red flag that we are seeing so many apparently independent crises happening within such close proximity of each other. The most recent of these has occurred in Argentina, where the government is under pressure to fix an ailing economy which has a host of issues pushing investors out of the country. These three examples provide a range of circumstances, yet one recurring issue is related to the exchange rate. With the dollar appreciation over the past six months, there was always going to be a fear that those developing economies with high dollar denominated debt were going to be exposed.

Certainly one of the most impressive declines seen in the emerging market (EM) space of late has come from Turkey, with the lira losing 65% against the dollar in the past four months. This has been associated with a host of issues within the country, both political and economic. Attempts to arrest the decline in the lira have largely been unsuccessful, with the current 17.75% headline interest rates perceived as too low by markets. This week’s announcement that the central bank will provide its independence has raised expectations of a rate hike, despite President Erdogan’s aversion to the tool. The decline in the lira may be partly due to Turkey-specific issues, yet there has certainly been a response throughout the EM space.

One issue that appears to be a key element for all of these nations is inflation, with the fall in a currency raising the cost of imports, thus leading to imported inflation. This adds to the sense of crisis, with the radical shift in prices sharply hitting the economy as wages fail to keep up. This fall in real income means that consumers are typically unable to maintain their previous purchase capacity, thus reducing demand and hitting the economy. However, the tool traditionally utilised by central banks to arrest a rise in inflation is an interest rate hike. Unfortunately, this raises everyday costs (such as mortgages) and deters investment/borrowing. Thus, the solution to these issues will typically drive further contraction in the economy. This is a vicious spiral and can be difficult to halt.

The lira certainly has taken a beating, and with USD/TRY attempting to hit the 71,151 highs once again, we could be set for another push from here. However, the ability to break that level is going to be crucial as there is a chance of stabilisation following recent volatility. Thus it makes sense to await a break through resistance to look for further upside, where intraday bearish signals could provide a sign that we are set for a period of wide consolidation. 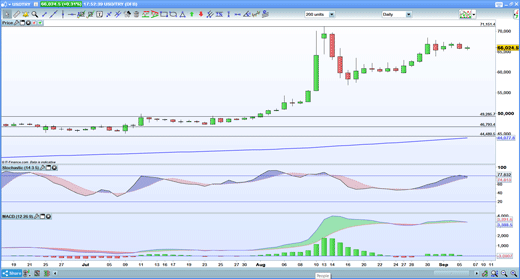 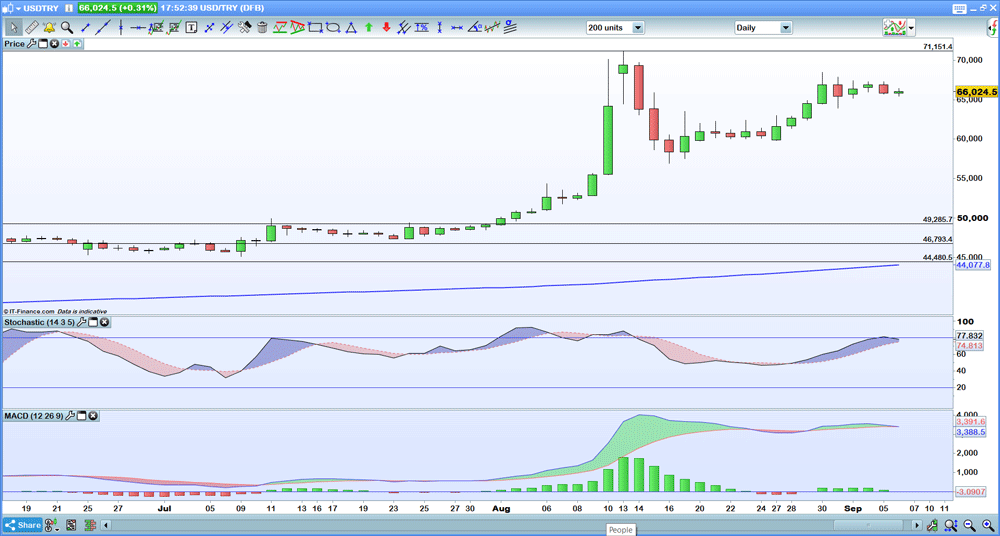 Argentina may have different issues to some extent, yet we are seeing some similar patterns coming into play. High US dollar denominated debt, coupled with a twin deficit (fiscal and trade) ensure that money is flowing out of the country at an alarming rate. The decision to raise rates to 60% may be an attempt to stifle the decline in the peso, yet markets have paid little attention thus far. Inflation once again is at the heart of their problems, with the rate topping 30% this year. Yet again we have seen measures taken to arrest this decline, with the government slimming down expenditure and raising export taxes in an attempt to shift into a budget surplus. However, with Argentinian farmers coming off the back of a particularly poor harvest, there is little reason to believe that this will do much apart from further push the country into crisis and poverty. After all, while exporters will see higher international demand given the devaluation of their currency, they are also hurt by rising input prices and are often unable to raise production.

With the US raising rates, we are seeing continued interest in the dollar, given its role as both a haven and carry trade. Also, while previous threats to the EM space have been greeted by a slowdown in monetary tightening from the Federal Reserve (Fed), the fact that the US has imposed a set of fiscal measures aimed at boosting corporate performance means that there is less need for the US to fear negative repercussions to further rate hikes.

This is bad news for the EMs, with the economic deterioration in countries such as Turkey, Argentina and Venezuela raising risk aversion and shifting funds out of EMs and into the likes of the US. This is bad news for the EM space as a whole, and as is evident above, this issue is unlikely to go away anytime soon. Unfortunately, the three nations above have highlighted that the decision between a free-floating and a manipulated exchange rate isn’t necessarily the difference when seeking to avoid such a crisis. Pegging to the dollar could be a solution, yet it also has its problems given that it does not adjust to provide an automatic stabiliser effect for the economy.

The issue we now have is that there are a whole host of economies which have high interest rates, inflation, deficits, and significant dollar denominated debt. As with the examples above, there are always going to be reasons for investors to be more or less confident in an emerging economy. South Africa is one such example, where worries over a land grab (in the name of reducing inequality) heightens the likeliness of a breakdown in foreign direct investment. The USD/ZAR chart below highlights the decline in the rand, with a channel breakout leading to a surge through the R145,741 level. This doesn’t mean that we are set for a crisis in South Africa, yet the likely continuation of the current EM worries will likely push the pair further to the upside. 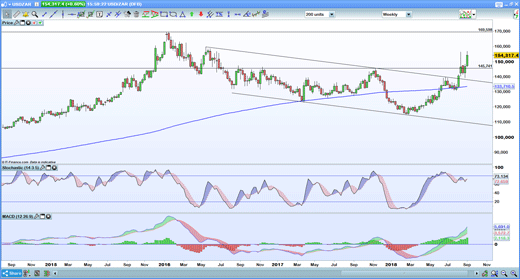 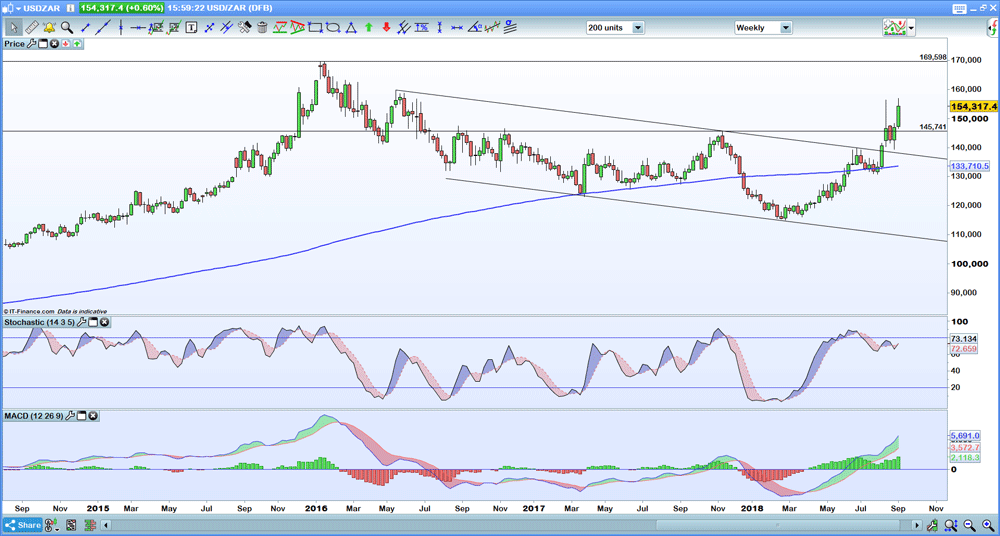 Other nations with large dollar denominated debt include Chile, Poland, and Hungary; each of which have foreign currency denominated debt that amounts to more than 50% of gross domestic product (GDP). Russia is another country which is likely to get caught up in this EM sell-off, with continued suffering thanks to sanctions hitting sentiment alongside the rising rate of inflation. The chart below highlights that we are emerging from a period of strength for the ruble through 2016 and 2017, thus pointing towards the potential for further upside in USD/RUB. With a sharp rally seen at the start of August, it looks likely that we will see another spike for the pair in the near future. 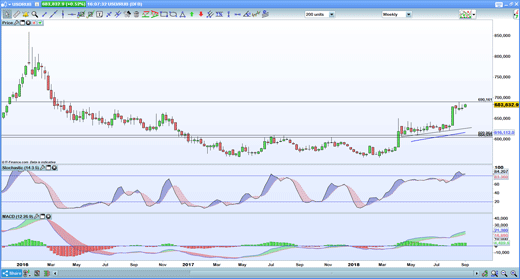 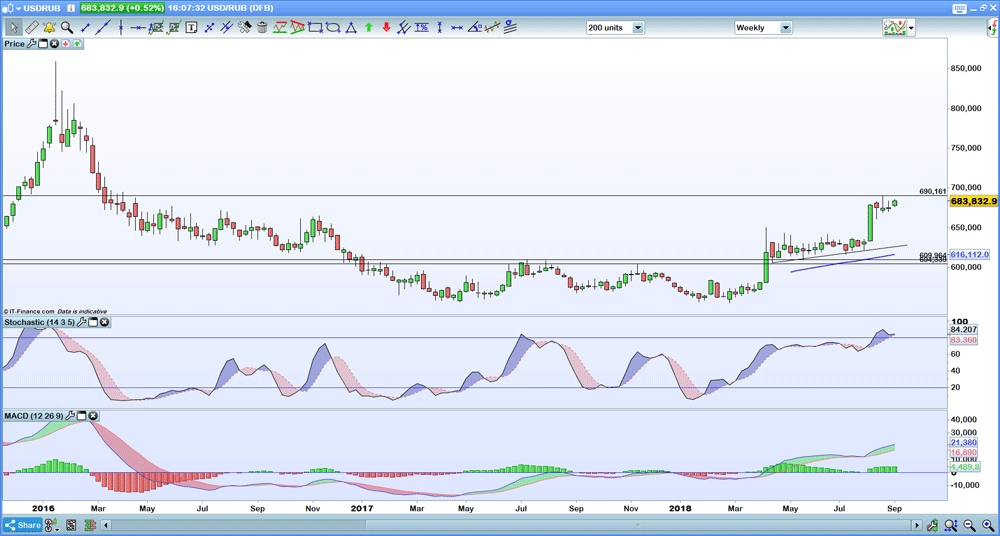 All in all, there are a number of countries to keep an eye out for. However, to a large extent we do not need a full blown crisis to see currency devaluation. A likely continuation of this theme is going to see money flow out of EMs.