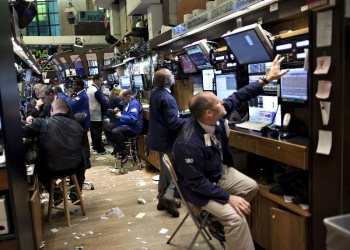 The FTSE 100 on Wednesday closed below levels previously seen 11 years prior, with the blue-chip benchmark index falling further still on Thursday.

On Thursday, the FTSE 100 closed down 217 points, representing a decline of 3.15% - one of the biggest falls on a closing basis the index has seen since the Brexit vote on 24 June 2016 – wiping £56 billion worth of value from the companies that comprise index.

A fresh sell-off of global equities amid fears of a global economic slowdown has intensified UK investors negative sentiment as Brexit uncertainty continues weigh heavy on traders’ minds, with the UK Prime Minister Theresa May increasingly unlikely to have her deal approved parliament.

This summer, UK stocks reached a record high pushing the FTSE 100 up to 7859 levels as investors piled in to take advantage of a weaker pound.

However, despite the massive declines in stock prices witnessed over the last two days, the FTSE 100 Total Return Index, which measures the total return on a capital performance and dividend basis – is up by around 90% since the end of 1999.

‘It’s tempting to conclude the stock market has gone sideways,' Laith Khalaf, senior analyst at Hargreaves Lansdown, said in a note. ‘That’s because the headline FTSE 100 index ignores dividends paid by U.K. companies, which are a huge source of the total return payable to investors.’

European equities couldn’t avoid the global sell-off either, with the pan-European Stoxx 600 index falling by more than 3.3% and Germany’s Dax down 3.48% on Thursday.

Investors in European stocks also felt the pang of slowing growth, depressed oil prices and rising US-China trade tensions after Huawei CFO Meng Wanzhou was arrested in Canada and faces extradition to the US. The news precipitated the Dow Jones index to slide 700 points on Thursday morning.