Nasdaq closes 3% lower dragged down by Apple and chipmakers

Apple and chipmakers fuelled a slide in US equities as investors grow concerned about the growth prospects of tech companies as trade war threatens bull run. 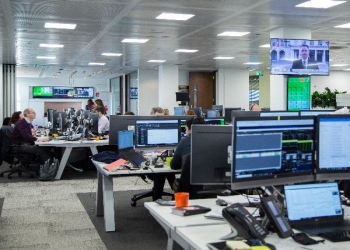 The Nasdaq Composite index closed 3% lower on Monday, with the S&P 500 following it on its decline, falling 1.6%, with chipmakers and Apple contributing to the sell-off in US equities that eroded gains seen earlier in November.

In early November, Apple’s market cap was north of $1 trillion but with investor sentiment dented by signs that the global economy is cooling down and a trade war with China that threatens to hurt growth for many big US tech companies, its stock is now valued at around $880 billion.

Apple is not the only company to see its gains eroded, with Google’s parent company Alphabet suffering a 10% decline, while Facebook and Amazon have seen their stock fall by more than 20%.

With blue chip tech companies unable to convince investors that their pipeline of seemingly endless profits will continue amid a myriad of headwinds, it is no surprise that the negative sentiment is being felt across the industry.

Share in South Korea-based the companies like Samsung Electronics and SK Hynix fell by 3.6% and 4% respectively, while US-based chipmaker Micron Technology slid 6.7% amid accusations that the business had engaged in anti-competitive behaviour.

The stock market decline contradicts a US economy that is largely in good health, with unemployment remaining at around 4% - its lowest rate in in the last ten years – and GDP growth expected to hit 4.1% in 2018 in what is the longest period of economic growth the country has seen since the second world war.

But despite the US economy looking strong, investors are not blind to signs that the global economy, especially in Europe and China, is beginning to cool.