Trader’s view – markets get bullish on trade and May vote 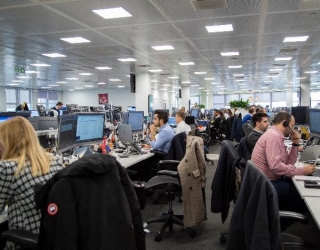 There’s an hour and a half to go in the US session and global equities are up. Let’s assume they finish that way – there is plenty of room for clarification (and rationalization) late-on, if need be. Traders have taken the new green shoots in the trade-war and spun them into a positive narrative. Sure, the old green shots lay trampled below the new ones, but perhaps this time around the positivity will be given a chance to thrive. The other story hogging headlines in the financial press is the vote motion UK Prime Minister May’s leadership of the Tories. Market confidence has been shaken by that development, but as we wake-up this morning, the balance of opinion seems to be suggesting that May will win the day.

Politics is driving markets still, which is always dangerous – it’s often a distortionary influence on prices rather than a revealer of fundamental facts. However, the fundamental economic data that was handed to traders overnight supported their optimism. Arguably the most significant release for the week, US CPI figures delivered a bang-on forecast number. If you’re a bull, locked in an environment where there exists fear of a global economic slowdown on one side, and fears about higher global interest rates on the other, a moderate outcome to any data-release is welcomed. Fundamental data last night was light otherwise, with US crude oil inventories the next most important release. It overshot forecasts, but still showed shrinking supplies, which boosted oil prices and (at the very least) didn’t detract from the bullish sentiment.

The next release on the data docket is the ECB meeting tonight. It’s that central banks last meeting for the year and ought to be watched, considering all this talk about slower growth and hawkish central bankers. Given the noise in markets and the gradual stagnation in the European economy, it’d be a might surprise if ECB President Mario Draghi and his team deliver any surprises. The situation across Europe is fraught with political, social and economic danger. No central banker is going to want to light a flame under all of that. Going into 2019, France is burning, Italy is agitating for change, the UK is still trying to bail, and the custodian of it all, Germany, is about to lose its steady hand in leader Angela Merkel. The politico-economic landscape doesn’t inspire much confidence in the grand European project, and the ECB will probably reflect that.

Nevertheless, as mentioned, traders are taking in their stride the ever-present risks in this market. (Stream of consciousness status update: US equities are giving up their gains with about an hour-and-a-half in trade to go, however they remain ahead for the day. Again, let’s check in on that later.) The core question at hand on bullish days is to what extent are rallies a reflection of market-reality or mere perception. US stocks have ended as of today its latest downtrend – another in a line of aggressive sell-offs and rallies within what is overall a sideways pattern since the middle of October. There must be scope for a break-out from this pattern at some point soon. The S&P500 eyes the 2800 again now: maybe we assess the strength of the bulls by their ability to return US stocks to that level again.

SPI futures are tracking Wall Street’s performance this morning, as they are wont to do, suggesting an open 5 to 10 points higher for the ASX 200, at time of writing. The performance of Australian equities yesterday was solid, in line with major regional counterparts, as fears of trade-wars abated once again. Volume was ample at 15 per cent above average and breadth came-in just below 80 per cent. Each a sign of strong bullish conviction. It seems a desire to get into cyclical, economic-growth stocks constituted the essence of yesterday’s sentiment. The greatest activity was to be found in the materials, industrials and consumer discretionary stocks. Irrefutably, this is a good sign for the many who hold optimistic-enough views on global growth; the test will be whether this view can be vindicated leading into the end of the year.

The success and failure of the ASX 200 will be strongly correlated to what happens to US stocks for the rest of 2018. It figures: the core issues in the market relates to the ongoing strength of the US economy, and how hawkish the Fed may-or-may not be. There is probably an inherent disconnect on some scale of looking at our market through that lens. The ASX200 never truly saw the parabolic rise in prices that the major Wall Street indices did during the easy money era (Australians engineered a residential property boom instead). All the same, if seasonality is a guide, a December run higher is on the cards come the last half-of December. The measure of any run’s sustainability should roughly be assessed by the index’s ability to challenge levels at 5705, 5790 and 5880.

The North American session is nearly at its close. Time for a review on the price action. Wall Street is off its intraday high but has still managed gains over 1 per cent. The benchmark S&P 500 is 1.2 percent higher. This backs-up a day in which the DAX and FTSE rallied 1.4 per cent and 1.1 per cent respectively. US 10 Year Treasury Yields are up to 2.90 per cent, and the yield on US 2 Year Note is up 2.77 per cent, widening the spread there to 13 points. Credit spreads have also narrowed. Higher risk appetite has seen the greenback sell-off. The DXY is at 97-flat, thanks in part to a Euro that’s fetching 1.1375 and a pound that’s buying above 1.26. Gold is slightly higher $US1245. The growth-optimism has boosted our AUD to just above 0.7225, while oil is up, and copper and iron ore are down.