US indices climbed while European shares got dumped, in what added to a mixed day for markets 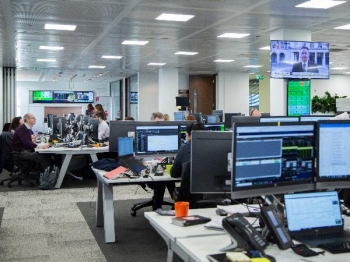 Last night’s moves: US indices climbed while European shares got dumped, in what added to a mixed day for markets. The DAX fell 1.4% throughout the day, taking a lead from Asian markets, which continues to suffer amidst trade war concerns. The FTSE was exempt from some of the harsher selling in European equities, only dipping -0.1% below the session’s open. In contrast, US share markets experienced a breath of optimism, with the S&P, Dow Jones and Nasdaq all rallying over 0.5%.

US data disappoints: The moves higher in US shares come despite a night of soft data out of the country, demonstrating the overall disregard for fundamentals this week. US GDP printed below forecasts of 2.2%, to land at a flat 2% for the quarter. US unemployment claims for the week also disappointed, showing that claims came in at 227k versus expectations of 220k. Although neither release was never expected to set the financial world on fire, the relative irrelevance of fundamentals will cast an interesting light over next week, during which several major economic data releases are scheduled.

ASX breaks run of losses: The ASX closed trade 0.35% higher yesterday, breaking a four-day losing streak, led by a boost in the key financial and mineral sectors. Chinese shares, as measured by the Shanghai Composite Index, reversed early gains to be -0.37% lower (at time of writing). The Hang Seng has held its ground, however tentatively, having fallen to a 7-month low yesterday. The Nikkei is also in a neutral spot now, which currently trades 0.05% above its open, mostly thanks to a terrible Retail Sales data released today, which showed consumer sales in Japan expanded 0.6% on an annualized basis against a 1.3% forecast.

Asian data day: In terms of fundamental data in the Asian session yesterday, the biggest release in terms of impact on financial markets was certainly Crude Oil Inventories, which pushed the price of Brent Crude flying through the $US77 handle. In lower impact news, the Reserve Bank of New Zealand kept rates on hold as expected at 1.75%. The NZDUSD fell on the news, extending yesterday’s losses, after RBNZ Governor Stuart Wheeler adopted a more dovish tone than expected in his team’s accompanying statement. It appears the RBNZ remains comfortable with current rate settings but appears comfortable cutting rates to stimulate the economy if it requires it. For Australian traders, considering the tendency for pundits to lump the New Zealand and Australian economies in a similar basket, the RBNZ’s position could shape views about the RBA’s outlook, and thus influence trading in domestic markets.

The ASX today: The ASX early this morning is looking like following the lead of US markets, at least at the open, with SPI futures pointing to a solid end of the week for local shares. It will continue to depend on what traders can get out of the bank’s and mineral stocks today, as momentum seems to drive activity in those sectors. The bank’s may find themselves benefiting from a sustained lull in long term bond yields, which have fallen as risk havens have been sought by investors. The miners may still feel the benefit of higher oil prices, although look for this theme to prove more fragile given mineral stocks sensitivity to growth fears.

Commodity plays: Scanning across commodities markets, the conflicting stories around oil supply, global growth, and trade war risks are pulling prices in different directions. Oil continued to gain ground yesterday, albeit a slower pace, as supply concerns control markets there. Brent Crude is looking at another challenge of $US78, as that psychologically important $US80 handle comes closer to traders sights. Trade sensitive commodities remain under pressure, with nickel, copper and aluminium still feeling the heat. Strangely, bucking the theme is iron ore, which according to Dalian Iron Ore prices rallied over 1% last night. Look to today’s Chinese PMI data to impact commodities prices, as well as feed into the overall Chinese growth story.

Risk signals: The signs that perhaps it pays to remain bearish is implied by two indicators: the play into safe havens, and the warning bells ringing in emerging markets. The situation on both these fronts worsened yesterday and has shown-up in a concerted play into risk haven assets, along with a spike in emerging market volatility.  Regarding the former, investors have continued to run into safe havens, which has seen the USD push higher and benchmark US 10 Year Treasury Yields fall to 2.84%. In terms of the latter, fears about long term global growth prospects have seen a sell-off of the Indian Rupee to a record low, and the US yield curve turn flatter. Both signs can often be a canary in the coalmine for financial markets and portend bigger problems in the future, so keeping an eye out as each story evolves may prove wise.