US tech giants still going strong, but where next for the shares?

The latest financial results for Apple, Amazon, Facebook, Netflix, and Google parent Alphabet suggests they’re all still powering ahead, but will that be enough to keep driving their share prices higher?

The rally in US equity markets in 2017 and early 2018 has been led by technology stocks. The share prices of the so-called FAANG stocks – Facebook, Apple, Amazon, Netflix, and Google - have been rising for even longer, as they’ve become the dominant companies in global technology.

However, the rally has led to fears that the stocks may be overbought and due a correction lower alongside the stock indices they power. Do the latest results from the companies suggest this is a real threat, or can their share prices keep moving higher?

How are the FAANG stocks faring?

The social media and tech company’s shares hit a record high after it said revenue in the final quarter of 2017 jumped almost 50% on the year to $12.97 billion. Net profit rose to $4.27 billion, from $3.56 billion, but it wasn’t all rosy. Changes to the news feed meant user engagement went down, but investors appeared reassured by executives who promised to focus on this area going forward for the long-term good of the business. Company forecasts that its ad business would remain highly profitable going forward also helped. At least 13 brokerages have raised their price targets on the stock in response.

Technical analysis: Facebook has been trading within a longstanding uptrend. Despite recent volatility, this remains intact. The daily chart below highlights the recent response around trendline resistance, which raises the chance of a near-term period of weakness. A break through that dynamic resistance line would bring about the potential of a ramp up in the pace of ascent. Whether we see a short-term pullback or not, this chart remains bullish unless the price falls below 17,581. 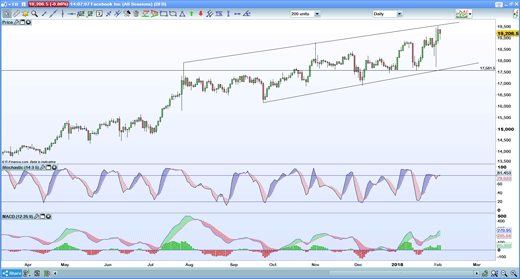 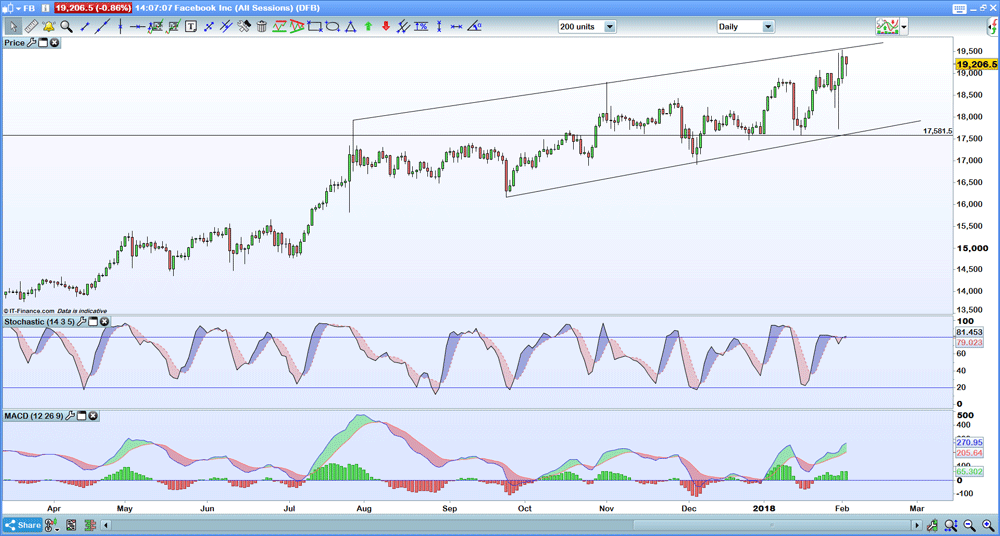 The world's biggest technology company gave a disappointing revenue outlook for the current quarter, and said it sold fewer iPhones over the final quarter of 2017 than analysts had expected. That should have sent shares down. But the market was instead reassured, as the company said lower sales were a result of higher iPhone prices and hinted that it could return more than half of its $285 billion in cash to shareholders. Revenue in the final quarter of 2017 rose to $88.3 billion, from $78.4 billion a year earlier, and profit was $3.89 per share, up from $3.36 a share. Both figures beat analysts’ expectations, but Apple’s forecast of revenue of $60 billion to $62 billion for the current quarter was below hopes.

Technical analysis: The long-term Apple chart is certainly impressive, with a 50% rise in 2017 helping push the share price to fresh highs. However, with this week’s fall below 16,655, there is a good chance we will see further short-term downside. That being said, the clear cut uptrend in play means that any such near-term downside would be viewed as a buying opportunity, with a bullish medium/long-term view remaining in place, as long as the price does not fall below 14,940. 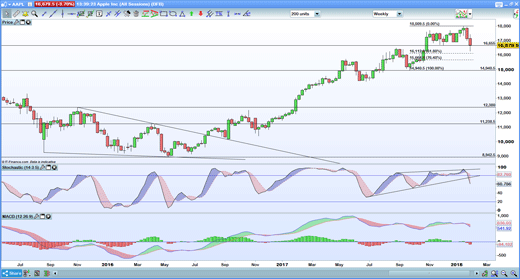 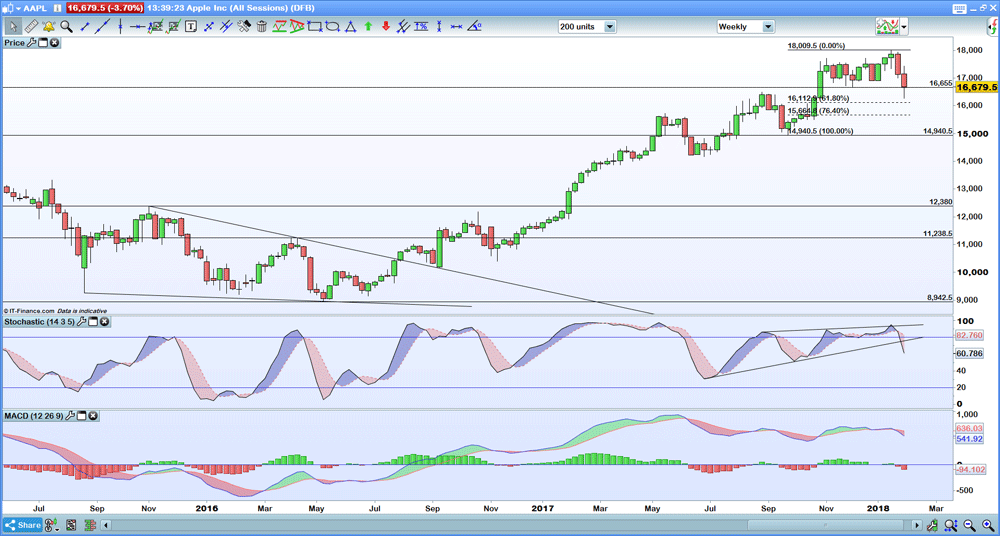 The online retailing giant’s quarterly net profit more than doubled to $1.86 billion, a new record for the company. It said it had added millions of new members to its Prime service, while the shopping boon related to Thanksgiving in the US, and Christmas elsewhere, sent total revenue soaring 38% on the year to $60.5 billion. Profit received a provisional $789 million boost from US President Donald Trump’s tax regime changes. One surprise for many was sales through the company’s voice assistant Alexa, which surpassed the company’s own ‘optimistic’ expectations. But the real positive was the continued growth in Prime membership, particularly as the company has raised the fee in the US for the month-to-month service.

Technical analysis: The Amazon chart takes the bullish tech theme to another level, with its share price rising 25% in the first month of 2018 alone. This long-term trend shows very little sign of slowing down, and despite the potential for a pullback at some point, we would need to drop all the way down below 112,540 to negate the bullish outlook. This stock is on a rip of late, and unless something drastic happens, there is reason to believe we will see further upside yet. 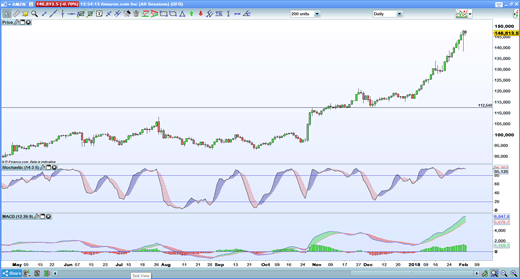 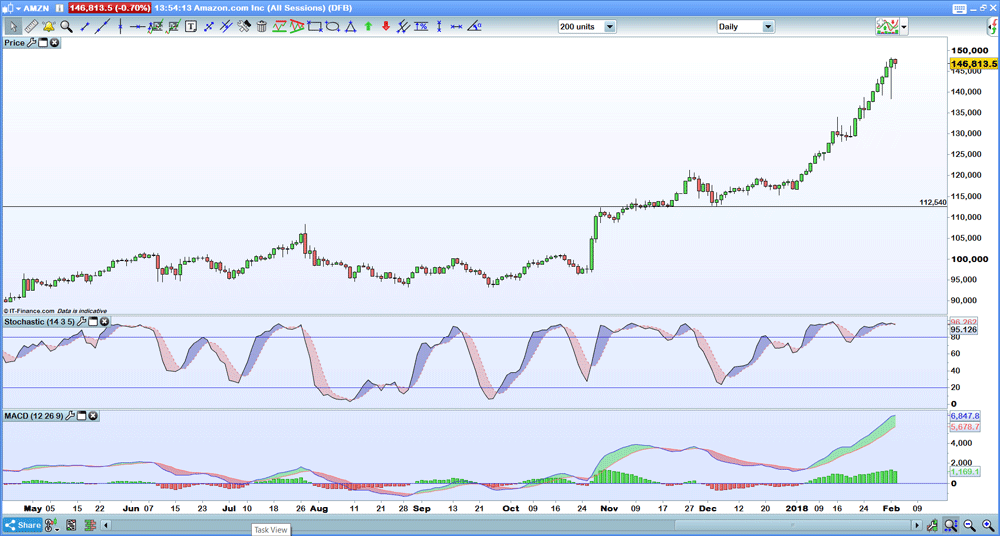 Netflix shares hit another record high and its market capitalisation surged over $100 billion for the first time, after the company trounced market expectations for subscriber growth in the final quarter of 2017. It added another 6.36 million subscribers in international markets in the quarter, taking its global streaming subscriber base to 117.58 million streaming subscribers globally. Analysts had expected it to add 5.1 million new subscribers during the three months. It made $3.286 billion in revenue, in line with hopes, but quarterly net profit was just $185,517. It is still spending heavily on original content and expects negative cash flow in 2018 of $3 billion to $4 billion, up from $2 billion in 2017. However, as long as that content spend keeps driving subscriber growth, investors appear happy.

Technical analysis: Netflix has been on an incredible run of late, with the shares gaining almost 50% in the first four weeks of the year. We are now seeing some of the heat taken out of the shares, with the price dropping for four consecutive days. Given the wider bull market, there is reason to believe that we will see the price push higher before long. Despite this, there is a strong chance we will see a deeper retracement, and as such it makes sense to look for intraday bullish reversal patterns, or else a deep retracement before looking for longs. 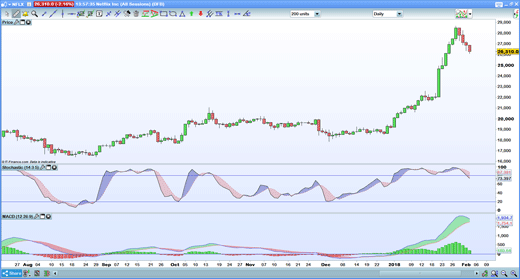 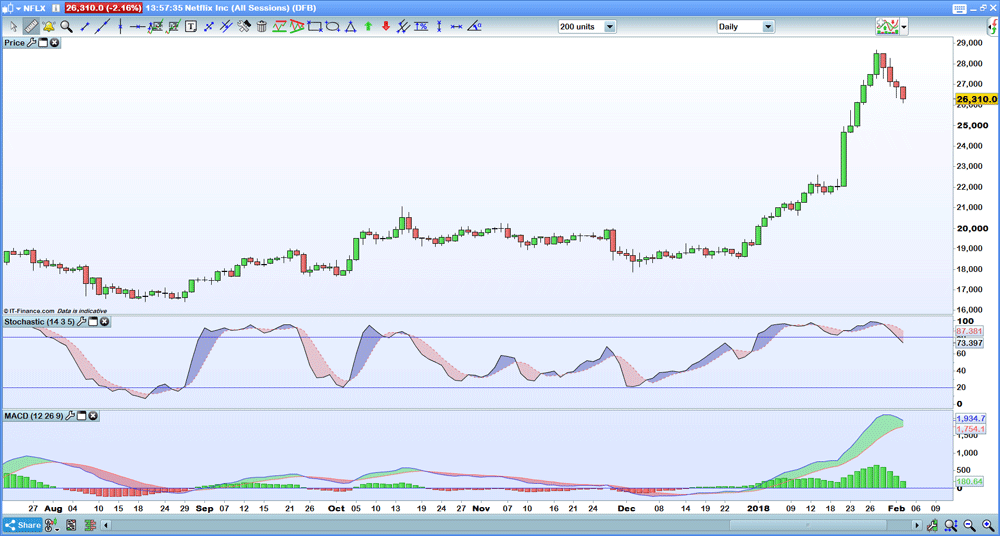 Google parent Alphabet actually missed quarterly profit forecasts, as steady advertising sales growth was offset by increased spending to promote its consumer gadgets, YouTube and cloud computing services. Revenue in the final quarter of 2017 rose 24% to $32.3 billion, while adjusted profit of $6.8 billion missed analysts’ expectations for $7 billion. The adjusted figure excluded a $9.9 billion tax charge that’s expected to be a one-off, as a result of the Trump tax changes. Despite the quarterly profit miss, analysts focused on the company’s future prospects for driving continued growth from its myriad activities.

Technical analysis: Looking at the chart, the long-term uptrend has hit some recent volatility, with the price moving lower at the back end of this week. With trendline support down below, any further losses would look like a good buying opportunity rather than any reason to worry.  In particular, should we fall into the 108,386-109,715 zone, this would look like an attractive buying opportunity. Only with a fall below 10,4833 would this chart begin to take a more bearish stance. 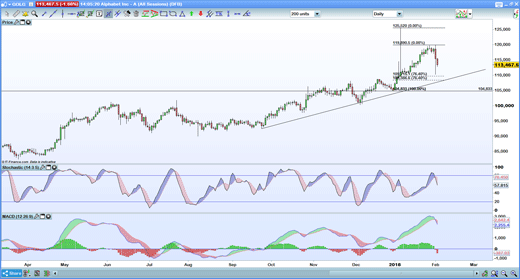 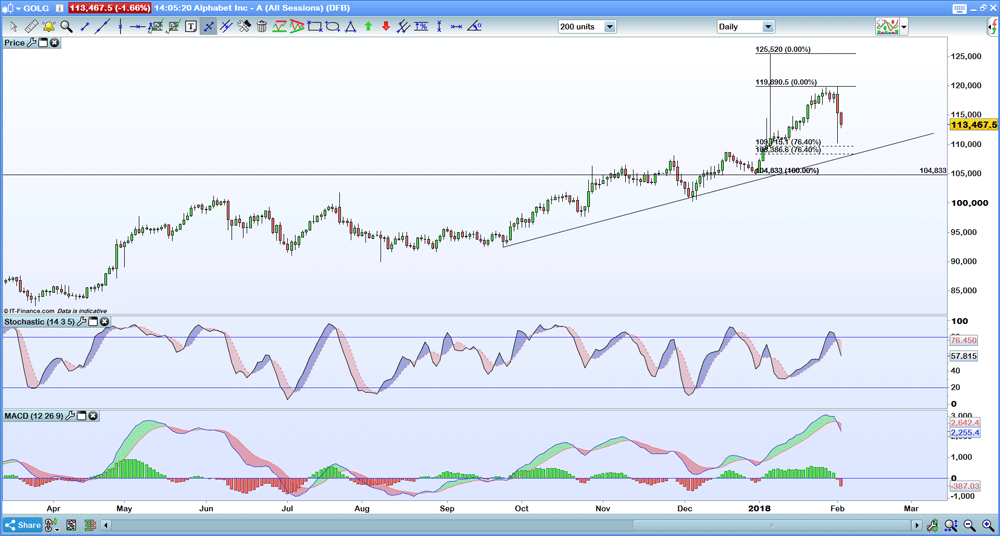 On ‘normal’ valuation approaches, the stocks certainly lie towards the top end of the range. Google, Apple, Netflix and Facebook are all in the high 20s or 30s where price-to-earnings (PE) ratios are concerned, while Amazon continues to rejoice in a forward PE above 200, and a current PE of 400. But these are still growth companies, they still continue to report earnings that are growing at rates that make other sectors look positively pedestrian.

So, while they look expensive, the prospects of future growth as Facebook expands into new markets, and the others find opportunities in the growing middle classes of Latin America, Asia and Africa, mean that these valuations are merely a sign of how strongly-favoured the shares are. Such high valuations mean that disappointments around earnings can lead to swift drops, but over the past nine years even the biggest falls have found buyers in due course. With so much growth on offer, there is still plenty of demand for the shares.