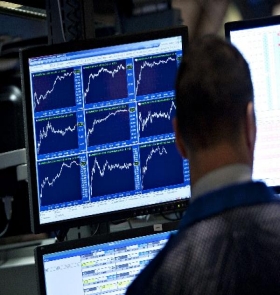 NVIDIA Corp shares took a sharp fall on Friday, falling up to 16% just after midday. The fall comes after the American technology company posted weaker than expected Q4 revenue.

NVIDIA’s outlook for the fourth quarter in 2019 also didn’t meet expectations, with a revenue expected to be $2.70 billion, gross margins at 62.3%, plus or minus 50 basis points, and GAAP and non-GAAP gross margins expected at 62.3%.

NVIDIA -- which makes computer chips and graphic cards—has influenced other tech-falls in Friday trading. Japan’s Nikkei fell as a result, with the Nikkei share down 0.3% at 21,733.17 points by Friday midmorning.

Analysts believe it started with Apple shares, then Nvidia, with performances computer tech companies setting the tone for the global tech and chip industries.

The contagion began with Daifuku Co -- which provides cleanroom automation systems-- falling 5% after the NVIDIA share fall, and after posted sales that missed expectations for Q3.

SoftBank Group Corp, was also affected, with investments in Nvidia. The company dropped 3.1 % upon the news.