The light at the end of the tunnel for Asia?

The gathering of factors weighing on sentiment for Asia markets had increased multi-folds of late, sending the region into a downward spiral. 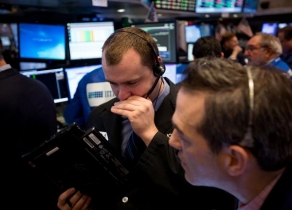 With the light at the end of the tunnel yet to be in sight, we look at the key levels and factors affecting regional indices.

It had been weeks rolling with the same factors undermining emerging markets where the latest drop notably sent the likes of Chinese and Hong Kong bourses into bear market territory. The deviation with US indices had been clear as the likes of the S&P 500 index saw its uptrend staying intact despite the build-up of tensions concerning the US.

To put it into perspective, the snowballing of concerns commenced into the year with the Trump administration sending shockwaves to markets with the series of threats concerning import tariffs. The latest materialisation of the $50 billion worth of import tariffs upon Chinese goods had most certainly affirmed the willingness of the Trump administration to take action, baring the teeth behind the bite. With that, suggestions of a further $200 billion tariffs ahead of another $267 billion, which will cover all Chinese imports, can be seen evidently taken negatively by the entire Asian region and beyond.

For Asia markets, the unfortunate coincidence had been the brooding negative backdrop. Turkey and Argentina, two countries that had ignited recent concerns over emerging market contagion with shaky economic fundamentals, remained on the pedestal. Back home, growth downgrades can be seen with expectations for Q3 performance to show moderation across the region as alluded to via high frequency indicators. Prospect of higher US rates supported with solid US economic indicators had proven unhelpful either to capital flows for Asia markets, supporting the divergence.

Amid the uncertainties, two factors worth watching as we hunt for indications of a reversal will likely be a turn in the US dollar strength and the clearance of trade jitters, key items inducing the current selling. Any slight turn in either is expected to shore up some relief for the region. While they are the eventualities, the near-term outlook is however muddled, and it would be difficult to put a finger as to when these might arrive giving room to further downsides for regional markets for the time being.

The CSI 300 can be seen leading the downtrend among Asia indices with over 25% drop from its January high when last checked. That said, a falling wedge pattern coupled with the bullish divergence on the MACD builds strong bullish bias for prices. The upcoming announcement from the Trump administration on tariffs may hold the key here with any relief that may arrive potentially, supporting a reversal and enable the 3128.9 horizontal support to hold. 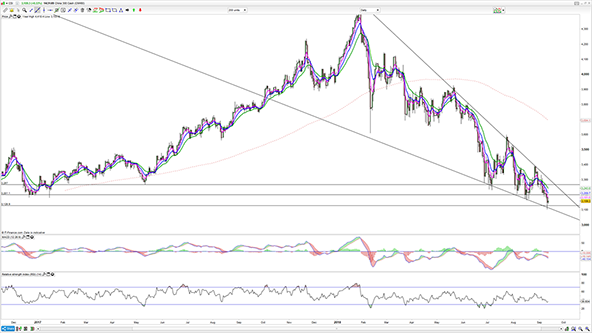 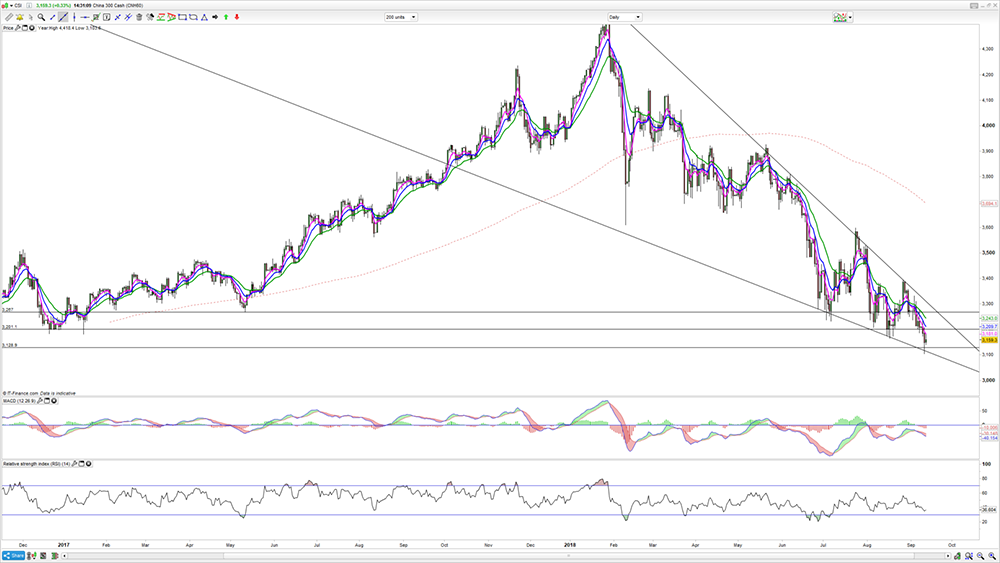 Comparatively, the HSI remains firm in a downtrend where prices are expected to edge towards the 26,000 key support next. A break below will expose prices to the 25,000 handle. 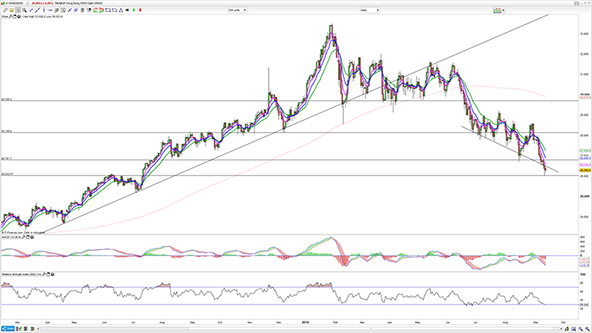 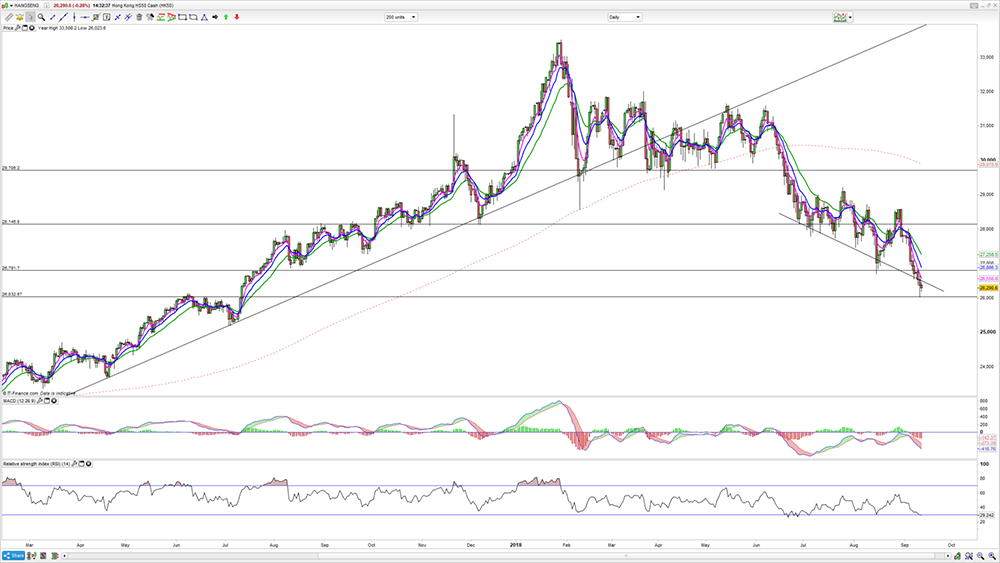 The STI finds the most bearish backdrop among the trio highlighted here with strong downward momentum still in place. A clear break below the support at around 3114 would open the downside towards the 3000 handle next, one to watch. 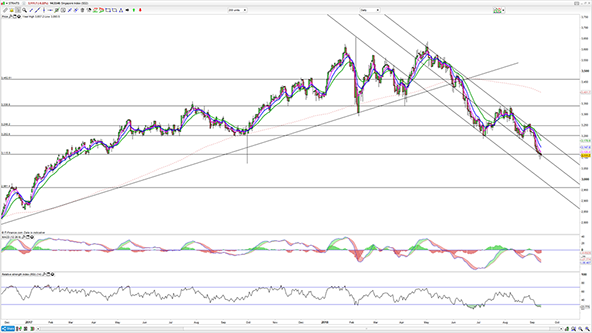 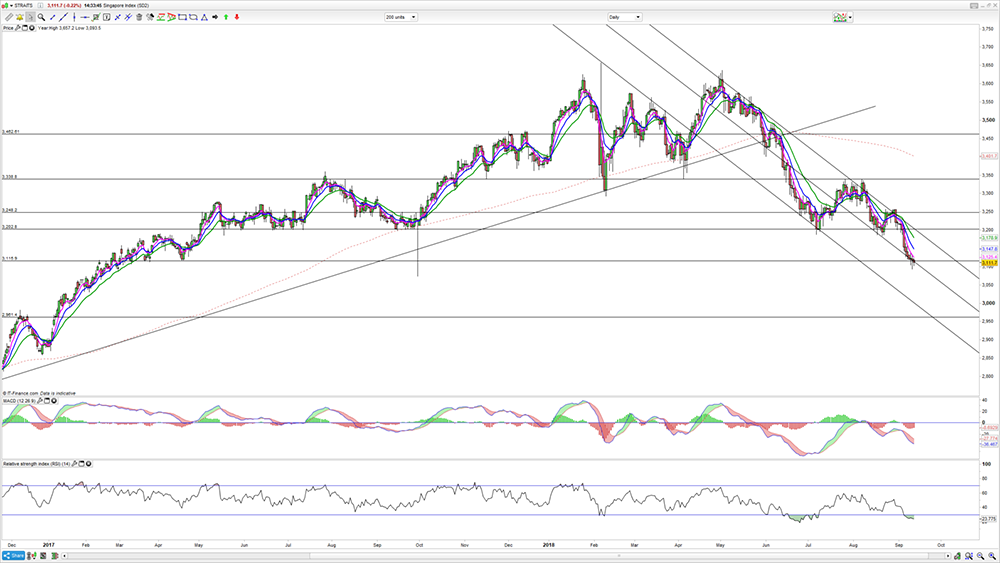