A degree of calm returned to markets yesterday, after global volatility spiked the day before following news of President Trump’s intentions of restricting Chinese investment within the US economy. 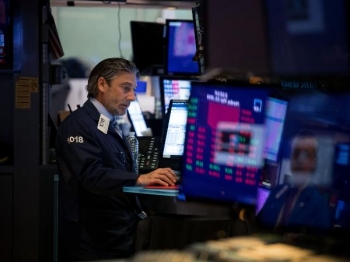 Volatility falls: A degree of calm returned to markets yesterday, after global volatility spiked the day before following news of President Trump’s intentions of restricting Chinese investment within the US economy. The VIX rapidly pushed above the 17 level from below the 14-mark, returning to levels not witnessed since mid-April, when investor fears were being stoked by potential military conflict in the Korean Peninsula and the Middle East. Investor’s nerves were settled throughout the day, as trader’s internalized comments from President Trump’s trade advisor Peter Navarro that Chinese investment would not become a major target in President Trump’s trade war. The commentary allowed for a more subdued day on Asian markets overall; however, given the unpredictability of US President Trump’s policy agenda, anxiety persists that another unexpected shock could be around the corner.

Overnight trade: Financial markets stabilized in North American and European trading, courtesy of the welcomed silence regarding the US-Sino trade conflict. The clear air allowed markets to re-evaluate the risks associated with potential curbs on Chinese investment in the US, particularly considering no firm line has been adopted on the matter by the Trump administration. US share indices managed to rebound consequently, with the DJIA and S&P gaining 0.1% and 0.2% respectively, in large part thanks to a boost in energy shares and a recovery in tech stocks. Earlier on in the day, major European indices produced mixed results in response to the more settled trading conditions: the FTSE100 managed to climb almost 0.4%, while the DAX was down 0.3% at the close.

Oil rally: The major driver in share markets last night was a rally in oil prices, following news that supply disruptions would likely outweigh the effects of a Saudi led boost in production. The story was underpinned by news that the US State Department is demanding buyers cut Iranian imports, in line with sanctions imposed upon the country by the Trump administration. The energy sector added over 1% in US trading after the news, with similar gains tipped for local shares this morning. Brent Crude is now trading above the $US76 handle, and raises questions leading into the release of Crude Oil Inventory data tonight about whether oil prices may be preparing for another push towards $US80 a barrel.

ASX: The ASX200 has proven remarkably stoic recently, holding onto territory even despite rising global economic and geopolitical risks. The index managed to staunch early losses yesterday, to close only -0.2% lower for the session, courtesy of another CBA led run higher in bank stocks. Predictably, mineral and IT stocks struggled: the former because of the impact tariffs may have on global economic growth, the latter because of heightened rhetoric from the Trump Administration about protecting the US IT sector. Utilities and consumer stocks pushed higher, thanks to a defensive play into non-cyclical stocks, suggesting that while risks remain high, investors aren’t willing to give up on the prospects of the ASX just yet.

The day ahead: SPI Futures are pointing to a generally flat open this morning, reflecting the dampened mood in markets at present. Local economic data is practically non-existent, and will be for the rest of the week, meaning global themes will probably be the impetus for any major moves in Aussie shares. Having bravely weathered a barrage of bad news over the last several weeks, one must question how far the ASX can go off the back of this recent run. One possible answer could be built into the technical data, which reveals upward trend line resistance could exist (currently) around 6290. Although a push here does seem ambitious, when considering the ASX200’s recent stubbornness, perhaps a run towards the 6300 level wouldn’t be too fanciful.

Asian indices: Looking across Asian indices in yesterday’s trading, share markets were mixed. Like Australian shares, data has been light and low impact, with trade war anxiety stuck at the fore. The trading dynamic has perpetuated the down trend in Asian markets, sending the likes of the HIS tumbling through support levels with quite limited push back. The Nikkei has fought harder against the tide, supported by soft inflation figures yesterday, recovering some ground to pick a battle with the index’s 100-day exponential moving average. Finally, China’s CSI300 index has tumbled 0.9%, extending this month’s losses to ~7.54%.

Chinese bear market: The sell-off in Chinese shares officially places the market in bear territory. The Shanghai Composite Index has now fallen 20% since the start of the year, as trade tensions along with potentially slower domestic growth weigh on investor sentiment. The index has now given up its last 12 months of gains, taking it to within a whisker of the 2800 mark. The Yuan is also being driven lower, predominantly due to intervention by Chinese authorities in financial markets, and fears of trade wars with the US. Memories of mid-2015 are entering the minds of market participants, when concerns surrounding financial stability caused Chinese shares to shed half their value in the space of 3 months. It would be premature to conclude that this bear market could see a repeat of that situation; however, for Australian traders, it’s a context worth considering as the story unfolds.