Chinese President Xi Jinping took the opportunity to strike a tone of ‘make trade, not a trade war,’ when he spoke at the Asian Forum in Boao. 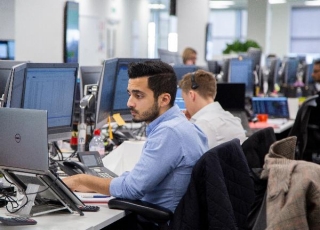 The tone taken was one of open trade borders, which would help to support China’s trade surplus further as Xi vowed to lower import tariffs on vehicles and open sectors from shipping to aviation and finance to increase foreign investment, which helped to boost risk sentiment and helped global equity markets rise across the board.

Australian stocks rose their most in a month and saw their third straight increase when the ASX 200 rose 0.83% to 5,856.9 or 48.3 points. The largest gain since March 6 was in the wake of Xi Jinping’s pledge to free trade with a conciliatory tone aimed at resolving any potential trade disputes that were seen as likely affecting Australia worse than most.

Implied shares of BHP and Rio Tinto show both shares set to rise nearly 5% with the possibility of momentum pushing each higher into the open.

The recently beaten up Australian Dollar was one of the larger benefactors in the G10 alongside the Canadian Dollar while the US Dollar slipped together with haven currencies like the Japanese Yen and the Swiss Franc.

A key currency pair that remains in focus of global investors is AUD/JPYthat in recent days has broken above a falling trend line that began with the first lower-high in late January. The move in AUD/JPY above the falling resistance line is indicative that that President Xi’s market-friendly speech could be a turning point for risk sentiment as evidenced by the weakening JPY and potentially the Australian dollar if multiple assets push higher. A move above 85 JPY per AUD would show that animal spirits are back and the JPY is being sold aggressively.

Risks of an all-out confrontation on global trade appear to be diminishing, which is helping lift commodities. At the same time, the threats are losing importance, and the focus is turning to Russia, a major global supplier of aluminium whose oligarchs that own commodity producing firms was recently hit with fresh sanctions. Wednesday morning’s price action was largely positive in commodities as Oil pushed to a fresh year to date highs.

The market remains very susceptible to large swings if threats eventually bleed into risk appetite. Many investors are keeping their eyes on copper, a global proxy for demand that is lower for the year, but also opened the year near the highest levels since 2014. The broader move higher from the 2016 low looks set to continue and further erosion of risk premium attached to the potential of a trade war, which looks probable may see copper prices continue their multi-year ascent.

Stocks across the world rallied as rhetoric on trade wars cooled down after Xi Jinping released some pent-up pressure. The prevailing view is that the global equity bull market remains in play through major US indices aside from the US tech 100 cash (NASDAQ) remain negative for the year. Despite the NASDAQ being higher for the year, recent insights from the CFTC Commitment of Traders report showed that institutional speculators are holding a net-short position. The position is a minor one on the stalwart technology index of North America that may ironically lead to the next charge higher if the net-short positions unwind on a continuation of bullish risk-sentiment.

Many investors appear thrilled about what Xi Said in Boao. A key headline came from the comparison of trade threats as synonymous with a ‘cold war,’ and zero-sum trade policy mentality deserves no place in the current global economy. Naturally, China is looking for ways to provide the world economy with an ‘open and prosperous’ approach to Asian economic development.

Going into the speech, there was a palpable fear that Xi’s speech would provide the stage for a retaliatory tone, but was instead an exercised opportunity to continue singing the tune of globalization and opening borders. For now, Xi Jinping looks to be the champion of global trade and aligns with the message he shared in 2017 at Davos’ World Economic Forum.

The heads of the world’s largest technology firms have often done a fine job of avoiding scrutiny by regulatory officials. On Wednesday morning (Tuesday US time), Mark Zuckerberg, the founder, and CEO of Facebook Inc. testified before Congress about the hypersensitive topic of data protection and the recent Cambridge Analytica scandal.

While shares of Facebook are down near 18% from their all-time highs earlier this year, the shares rose during the session as Zuckerberg defended the ad-supported business model as the best way to reach the billions of people. Advertisers and investors seemed to agree. Given the net-short NASDAQ speculative futures position per the CFTC Commitment of Traders report, traders should be aware that any negative market reactions around Facebook and other tech firms with similar business models could result in a negative feedback loop and lead pervasively lower prices in technology firms though that is not the base case scenario.

The financial fallout of Russian firms owned by oligarchs on the most recent US Sanction List has continued. While Russian stocks were higher, thanks in large part to Xi’s speech in Boao, Russian bonds saw aggressive selling that was concentrated in the metals and mining sector and recently into government-owned companies without a guarantee.  Tuesday’s one-day sell-off in Russian bonds was the worst day for the Bloomberg Barclays Russian Bond Index since 2000.