Investors have thus far shrugged off the meeting between US President Donald Trump and Russian leader Vladimir Putin, as the US President looks to ingratiate himself with the Russian strongman. 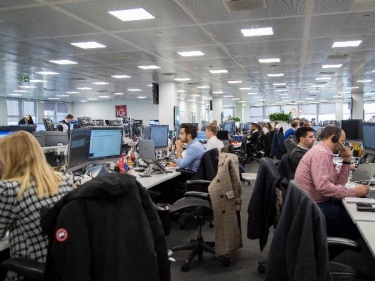 Markets are still feeling-around for a dominant theme to begin the week, following a night of effectively flat trading on the major indices. Investors have thus far shrugged off the meeting between US President Donald Trump and Russian leader Vladimir Putin, as the US President looks to ingratiate himself with the Russian strongman. The IMF released its growth figures overnight in a release of special significance, forecasting global growth of 3.9% in the year ahead. The institution made special mention of trade war risks to the global outlook, along with an emerging pattern of uneven growth between the developed and developing world.

Wall Street indices are looking like they’ll close the day in the red, seemingly static amid good-but-not-great corporate earnings. That isn’t to say the reporting season hasn’t delivered reasonable results, but that expectations have yet to be exceeded against what is a rather high bar. The financials in the US looks to be the winner so far today, following better earnings reports to those that were seen last week in the sector; while the tech space has slowed its run higher to weigh on the overall success of US markets this morning. In proof that US traders are willing to ignore outside noise in the middle of reporting season, a slightly better than expected print of US Retail Sales data (0.5 per cent vs. 0.4 per cent) failed to really cause much of a ripple.

Looking at the broader scope of global share indices, the last 24 hours delivers a mixed picture. The Dow Jones was the only US index so far registering a gain, extending its recovery above 25,000 to trade 0.2 per cent higher at time of writing. The S&P has failed to hold above resistance at 2,800, trading 0.14 per cent lower, while the already mentioned dip in tech stocks dragged the NASDAQ down 0.26 per cent. European shares were mixed, with the DAX adding a modest 0.16 per cent for the day, and the FTSE dropping a noteworthy 0.8 per cent; and Asian shares pared early losses yesterday in a day of slightly thinner volume thanks to a Japanese bank holiday, with the Hang Seng closing flat and China’s CSI300 falling 0.60%.

Speaking of China’s markets, it was a massive day for Chinese fundamental data, as the country’s National Bureau of Statistics dumped a batch of high-impact economic results. It’s sometimes difficult to gauge the veracity of releases of this magnitude, with many traders assessing the figures through a lens of scepticism. For example, the headline GDP print came-in bang-on expectations yesterday (at 6.7 per cent), as did Fixed Asset Investment and Unemployment figures; and Retail Sales beat forecasts, expanding 9 per cent versus forecasts of 8.8 per cent. The only stain on the massive release was Industrial Production numbers, that showed that measure undershot the 6.5 per cent forecast to print 6.0 per cent.

SPI futures are pointing to another flat open for the ASX200, courtesy of an apparent indifference towards the dulled trading themes. The index limped back towards the pack during trading in the yesterday’s session, breaking support at 6280 in early trade to finally find rest just below the day’s close of 6241. One highlight in a day that featured relatively few was the positive activity in Consumer shares, which appeared to have responded favourably to better than expected Chinese Retail Sales data. Consumer Discretionary ended the day    per cent higher, and Consumer Staples finished-up    Per cent higher.

Traders with an interest in the Australian economic landscape will have plenty to chew on today: the RBA will release its Monetary Policy Minutes for the July meeting, at which (of course) the central bank left rates on hold at 1.50 per cent. It’s been a terribly monotonous time when it comes to the RBA, with rates looking to stuck on hold while wages and inflation stay low, unemployment remains a bit too high, and private debt levels stay elevated.

Because of this, interest rate markets aren’t pricing in a hike from the RBA until early 2020 - at which point the bank will have kept rates on hold for around 3 and a half years. It’s difficult to believe any earth-shattering news will come from today’s release, but look for any increased optimism from the RBA to move markets, particularly given its recent approach of downplaying the negatives and accentuating some of the positives.

The AUD/USD regained its fight towards the end of last week, regaining some lost ground to rally above the 0.7400 handle, to hold at support/resistance around 0.7420. Remarkably, this came in the face of a rally in the broad US Dollar Index that saw the greenback register month-to-date highs around 94.90, a dynamic that has now diminished somewhat.

The fundamental picture for the local unit is negligibly different to last week, although a counterintuitive return of risk appetite could be pinned as the major reason for the run. The AUD/JPY – a great indicator of the global growth and global risk binary – has performed an impressive push higher last week, and in July more generally, to trade back towards 83.50 at time of writing.