Markets were made to curb their enthusiasm overnight. Trade war realities bit again and the relief rally that had defined last week’s trade dissipated. 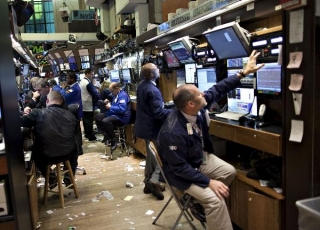 Trade war: It’s not a terrible cause for alarm yet, but it highlights how difficult to predict the impact on global trade disruption happens to be. It’s a debate that challenges orthodoxy, especially given that markets have done all they can to shrug off the potential consequences new-protectionism will have on global growth. Inefficiencies abound in such a system, one must assume, but whether this leads to a rapid slowdown in global economic activity, the answer remains challenging to ascertain. The heightened political tensions and the subsequent (and intermittent) sap on investor sentiment will be a constant, but to what extent this flows into fundamental matters of global inflation and interest rates, earnings growth within equity markets, and appetite for commodities is still unclear.

Asia: Far be it to speculate on the matter, the fact is traders took the weekend’s trade war escalation seriously. A lack of volume during the Asian session courtesy of well-timed public holiday’s in Japan and China blanketed the issue, meaning a solid read on how markets currently judge the trade war will rely on today’s trade. But nevertheless, global equities pulled back as a result of the news, with the industrials space hit the hardest by fears of slower global growth. During Asian trade, the Hang Seng was treated as the canary in the coalmine, what with its close proximity and ties to Chinese markets. The results weren’t great, as Hong Kong shares shed 1.32%, setting up a day for European and North American markets that began on the back foot.

Overnight: Futures markets had the overnight session poised for losses, and as North America winds up for the day, it’s what traders have (generally) received. There was a lot of noise pushing indices (in particular) around overnight, over and above the very core concerns relating to the US-China trade war. US politics was one of the main wails in the cacophony, after it was reported that US Deputy General Rod Rosenstein will resign from his job. The news jolted US investors, but the losses associated with that story were reclaimed throughout the day. Of the major US indices, a tech bounce helped the NASDAQ finish the day in the green, but overall the session was one characterized by an attitude of wait and see, with US markets not selling off anywhere near enough to suggest the run of record highs is over yet.

US Bonds: The fact risk appetite hasn’t truly been wiped, but has more been put on ice, manifested in bonds markets. This week is being defined by a push-and-pull between the ever-present trade war story, and the positioning leading into Thursday morning’s (AEST) meeting of the US Federal Reserve. A world of higher interest rates is being priced into markets at the moment, with US 10 Year Treasuries ticking up to 3.09 per cent again last night. Even more remarkably, the US 2 Year Note pushed to 2.81 per cent – noteworthy considering that only a month ago the 10-year was yielding the exact same – as traders apparently endorse the Fed’s view for future interest rates. Notwithstanding US yields however, the US Dollar has dipped (very slightly) again to start the week, as did the Yen, as traders spread themselves more evenly across the G4 currencies.

Europe: The reason for this diversifying across the major safe haven currencies is probably fourfold: one, it pays to spread risk around in the lead-up to a Fed meeting; two, though the trade-war has markets nervous, we aren’t in a risk-off environment yet; three, a new Brexit referendum on the Brexit deal was floated last night; and four, ECB President Mario Draghi delivered a very hawkish speech overnight. Regarding the final point, in a testimony to European bureaucrats in Brussels, ECB President Draghi pressed his view that underlying inflation in the Eurozone would soon pick-up. The commentary led to a jump in European sovereign bond yields and a challenge of the GBP/USD above 1.18. The price action was reasonably short-lived, with both of those asset classes recalibrating after a period. But the comments prove that markets are priming for a (relatively) higher interest rate world – ahead of a day that will welcome Bank of Japan monetary policy minutes and a speech from BOJ Governor Haruhiko Kuroda.

ASX: The ASX 200 will open trade today with these various events as context, establishing a SPI futures market that has the market opening down 8 points. Trade yesterday was supported by the fact that regional concerns were left to simmer by virtue of China and Japan’s public holiday. Volume was very light, and while diminished risk appetite saw the AUD/USD pull back from resistance around 0.7300 to about 0.7250 at time of writing, the ASX200 traded well in line with established patterns. It’s a sort of malaise plaguing Australian shares that is keeping things subdued: the ASX is trading on macro themes and second-tier stories, revealing a reluctance by traders to push this market too far beyond 6200. It was a pick-up in energy stocks because of higher oil prices, combined with a lift in the telco-space following news the TPG-Vodafone merger is good to go, that kept the ASX200’s losses to a modest 0.1 per cent.

Oil: On oil, the price of Brent Crude and WTI ticked higher overnight, as commodity traders buy into the view that a shortfall in supply won’t be hastily addressed by key oil producing nations. Tweet-storm or no-Tweet-storm, US President Trump’s demands for lower oil prices have gone unheeded, creating the perception that OPEC+ won’t bend to the will of the US President. The price of Brent Crude shot over $US80.00 a barrel last night, while WTI leapt over $US72.00, leading to calls that the price of the black-stuff (in Brent Crude terms) could shoot to $US100 per barrel. That call is surely premature, and it is doubtful that OPEC+ would hold its nerve in the face of US scrutiny long enough to see this occur. But a play into the mid-$80 isn’t off the cards, with some short-term key levels to watch at $81.67 and $US83.75.