SPI futures are indicating another week kicked-off by soft activity, with that market currently pointing to a 26-point drop at the open for the ASX200. 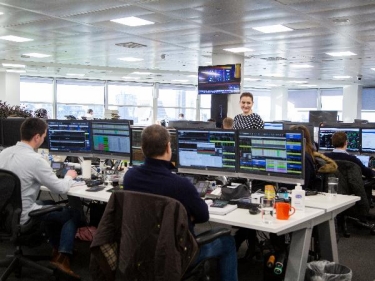 Last week: The trading week ended with a bang last week, and the high activity is expected to follow through into another high impact week ahead. Wall Street was mixed to close the week, as traders digested the combination of US GDP data and more tech-company earnings reports. The earlier Asian session was eventful, particularly for the ASX200, which managed a late-week run back to challenge its recent highs, courtesy of a solid boost in sentiment. It all sets-up another significant week, in which the earnings season continues apace, fundamental data both domestically and abroad is prolific, and several central bank meetings are scheduled.

ASX closes week stronger: SPI futures are indicating another week kicked-off by soft activity, with that market currently pointing to a 26-point drop at the open for the ASX200. Circumstances aligned nicely for Australian shares on Friday, which after days of sideways trading, managed to seize up a momentary shift in risk appetite to close above the psychological significant 6300-mark. A pick-up in bank stocks was the major determinant for the move — which finally reacted to the gradual climb in long term bond yields — and followed the lead set by the materials and energy sectors, which had already displayed strength throughout the course of the week.

ASX today: At this stage a pull back for the ASX is looking likely today, likely owing to softer trading volumes as traders prepare for a busy week. Given this context, a point of interest will be where the ASX can land today, to give itself the best opportunity to make another tilt higher as the week unfolds. Considering the local market has made a run up to these levels on several occasions, only to retreat quickly back to the mid-6200 mark, a hold above around the 6285 level is an adequate benchmark to judge the credibility of the most recent rally. The trend is certainly still on the up, but a week that sees a return of sideways trading may threaten this outlook and may undermine enthusiasm for the local share market.

US Shares: Wall Street ended the week in an underwhelming fashion, as notable reporting misses frustrate investors. The earnings season has proven to be a very good one for American shares, with a clear majority of companies either meeting or exceeding expectations. However, the headlines have been hogged by the noteworthy misses by the likes of Netflix, Facebook and Twitter, which has sapped the bullishness from the NASDAQ and stifled activity on the S&P500. How long this vexation amongst traders persists may shape the prevailing sentiment for US share markets and dictate how much fundamental of the self-evident strength of US corporates translates into rallies on share indices.

US Tech: Perceptions about the tech sector seem to be quickly transforming this earnings season, particularly as it relates to the collective success of the FAANGS stocks. The release of earnings from Twitter last week solidified this view, adding to the concern of traders about subscription-based and advertising-revenue-generated business models initiated by the disappointing Netflix and Facebook results. Although showing an increase in revenues, a drop off in user activity for Twitter caused the company’s share price to fall the most since 2018, prompting fears that the platform’s user-growth is limited. The tech complex seems to be bifurcating now, marking perhaps a new trend: a split in how Netflix, Facebook and Twitter are viewed, versus the likes of tech-giants Microsoft, Google, Amazon and Apple.

US GDP: From the perspective of fundamental data, the week concluded last week its biggest and most anticipated event: the release of US GDP data. The data was expected to reveal the biggest expansion of the US economy in 4 years, and the figures revealed just that, courtesy of a Trump tax-cut led boost in consumer activity. The headline print did miss expectations in all, limiting the optimistic reactions, printing at 4.1 per cent on a quarterly basis, against a 4.2 percent a forecast. The reactions in financial markets were a slight plateauing of USD strength, and a dip in US bond yields, as growth enthusiasm was ever so slightly tempered. However, the data reaffirms that the US economy is in a remarkably strong position — and seemingly looks equipped for the US Fed’s hinted 2 interest rate hikes before the end of the year.

The week ahead: Looking ahead what lays ahead this week, the calendar is loaded with Tier-1 events. On the local front, the ABS will release Trade Balance figures on Thursday, and Retail Sales data on Friday. In international data, a raft of PMI data is released across the globe, with none more important than the Chinese PMI figures to be released on Monday. The attention will then shift throughout the week to this month’s print of US Non-Farm Payrolls, released on Friday night. The week will also be significant for interest rate markets and central bank watchers: the BOJ, the BOE and the US Fed are all scheduled to meet, with forecasters predicting different policy outcomes from each central bank.