Warren Buffett has been dubbed the ‘oracle of Omaha’ thanks to his extraordinary investment skills. Buffett – the head of conglomerate holding company Berkshire Hathaway – has a net worth of more than $86 billion (as of November 2018). Here, we run through the top 10 positions in the Berkshire Hathaway portfolio. 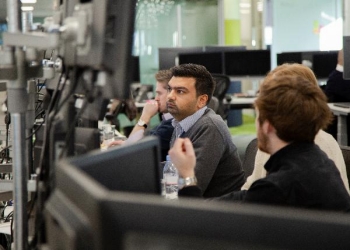 What are the 10 biggest positions in Warren Buffett’s portfolio?

Never veering from the biggest and the best, it’s no surprise that Buffett’s top holding is mega-cap company Apple. Berkshire Hathaway started picking up Apple shares in 2016 and now holds in excess of 252 million of them, making up roughly a quarter of its portfolio. However, this massive holding didn’t hold the top spot until 2018, when it bumped longstanding number one Wells Fargo & Company down the list.

Most of Buffett’s portfolio is made up of big financials. Coming in at number two, the Berkshire portfolio holds 877 million Bank of America shares. Berkshire Hathaway is Bank of America’s largest shareholder, although only 12.6% of its portfolio is allocated to this holding. When ‘the oracle’ first bought the shares in 2011, the bank was still recovering from the financial crisis. Since then, his investment has made considerable gains.

The third-largest holding of Warren Buffett’s portfolio is financial giant Wells Fargo & Co (WFC). Investment picked up in 1989 and the portfolio now holds roughly 442 million shares. WFC has been under the close watch of the Federal Reserve (Fed) because of recent regulatory grievances, but Berkshire Hathaway remains confident that the stock price will rise in coming years.

It’s said that Warren Buffett drinks up to five Coca-Colas a day, so it’s perhaps not surprising that the Coca-Cola Company features in the top 10 holdings in Berkshire Hathaway’s portfolio. Its shares make up 8.7% of the portfolio and have been a constant since 1987, when Buffett bought about $1 billion in stocks. The holding has since grown to 400 million shares.

Berkshire Hathaway holds nearly 27% of Kraft Heinz Company (KHC), with no less than 325 million shares. This makes it the third-largest position in Warren Buffett’s stock holdings. To date, KHC has yielded returns of close to $720 million a year for Buffett, who sits on the company’s board. But some investors are speculating that the company will suffer after he steps down.

A valuable brand with a large market cap, American Express (Amex) is another financial services firm in the Berkshire Hathaway portfolio. Amex’s stock price took a plunge in 2015 when the company lost a valuable partnership with Costco, but Buffett stuck to his guns and didn’t sell. He started investing in Amex shares in 1991, and his corporation now holds over 151 million shares (7.6% of its portfolio). That accounts for over 17% of Amex’s shares.

The Buffett portfolio is top-heavy, with most of its wealth in the top five holdings. However, it’s no surprise that he sees a lot of value in yet another major financial group, US Bancorp – with a total holding of close to 125 million shares. This holding makes up a significantly smaller portion than others in the Berkshire portfolio but the firm is still the third-largest shareholder of the bank, owning about 7% of the company’s stock.

Moody’s Corporation, an American business and financial services company, has been called out for having overpriced shares by some analysts, yet Warren Buffett’s portfolio is stocked with nearly 25 million of them. He remains bullish on the stock and he has made billions in profit since he took hold of the shares in 2001.

New to the top 10 list is multinational investment bank Goldman Sachs. Berkshire has gradually been building this position and now owns more than 18 million stocks – out of around 377 million that have been issued – making up less than 2% of its portfolio. Buffett saw Goldman Sachs as an attractive investment in 2008 in the early days of the financial crisis, which is why this holding is just another example of his confidence in his long-term investment strategy.

Berkshire Hathaway added 35 million JPMorgan Chase (JPM) shares to its portfolio in the third quarter (Q3) of 2018, catapulting the bank into the top 10. This purchase emphasises Warren Buffett’s affection for the US banking system, as more than half of the positions in the top 10 Berkshire holdings now belong to banks. JPM makes up around 2% of the Berkshire Hathaway portfolio.

To trade Warren Buffett’s top investments, traders can either buy the shares of the companies he invests in, or they can open a long-term position using derivatives. This is because Warren Buffett is a long-term value investor – also known as a ‘position trader’ – who tends to hold big positions for a long time. While such a strategy can increase the potential for profit, it requires traders to ignore short-term price fluctuations.