The ASX followed in Wall Street's lead overnight, after recording its biggest fall in eight months 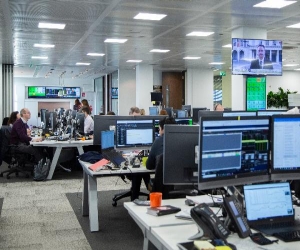 The Australian share market fell 2% upon open on Thursday, after Wall street suffered its worst trading day in eight months.

Stocks in world markets slid to a three-month low, with the benchmark S&P500 stock index falling at its biggest one-day fall since February.

The Dow Jones Industrial Average fell 832 points to 25,599. The S&P 500 index fell to the lowest since February, as the Nasdaq 100 index tumbled above 4%, the worst day in seven years, with the ASX following its lead.

IG market analyst Kyle Rodda says the cause of the Wall Street fall was due to many factors, but there was no single story or specific moment sparking the sell-off.

'The confluence of fundamental factors that underpin the move are clear, though: markets are pricing in higher interest rates, which is manifesting in bond yields; and concerns are growing that the US-China trade war is coming closer to impacting corporate profits.' Mr Rodda said.

The Australian dollar was also shaken while traders reacted to the US stock meltdown.

IG Analyst Kyle Rodda believes this was due to investors buying safe haven assets pushing US treasury yields lower, forcing currency traders to seek out the G4 currencies for protection.

'As a result, the AUD/USD dropped very close to new multi-year lows on the back of this, not far from the 0.7040 level.' Mr Rodda said.