The US equity juggernaut rolls on, with the S&P 500 hitting a new all-time high of 2463 on reasonable participation, with 78% of stocks higher and all sectors, bar financials, gaining. 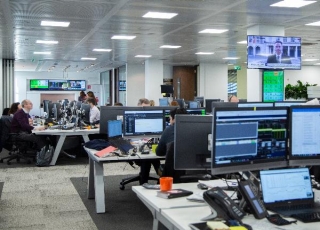 We had expected financial markets to be sensitive to US data on Friday and while industrial production was somewhat better than expected at +0.4%, we saw a poor monthly read on the core CPI print, at 0.12% (vs +0.2% expected). This was a slight pickup from the cumulative 0.00% pace we saw in the prior three months, but it was still a very soggy number and a 1.7% annualised pace was enough to keep the inflation concerns out there. One can also throw in a poor US retail report, where we can immediately focus on the core retail control group (the element of goods that feed directly into the GDP calculation) and see this declining 0.2%, far worse than the +0.4% the market had expected. It suggests the 2.6% consensus pace of Q2 GDP is up for debate, and I would not be surprised if a few economists ratcheted down their Q2 consumption estimates by a few basis points (bp).

The reaction has been interesting, as most of the moves have been confined to FX and equity markets. There was only modest buying in US fixed income and ‘real’ (or inflation adjusted) rates only fell modestly. However, the USD is the talking point and is firmly in the dog house. With equities higher, commodities firmer, credit spreads tight and implied volatility so low, we have seen US financial conditions become even more accommodative. This, in itself, gives the Federal Reserve license to hike again this year, but the market pricing suggests this is more unlikely to happen with the Fed funds future pricing in 11.5bp of tightening this year and only 39bp through to the end of 2018. So a 46% chance of one hike this year (presumably December) and less than two hikes priced through to 2018. This backdrop is great for Emerging markets and they are in fine form, with the EEM ETF (iShares MSCI Emerging Markets) gaining for a sixth day and eyeing a move to the 2015 highs.

The USD index, itself, is at the lowest levels since September 2016 and is technically in a bad spot and short positions from a purely technical perspective is really the only way to go. That being said, positioning and sentiment have deteriorated to an extreme level, notably with speculative positioning on the EUR (futures) increasing to 83,788 contracts and the most bullish (on the EUR) since May 2011. Keep in mind that there are no Fed speakers due out this week and economic data is limited to lower importance releases, so it’s hard to see any real chances to Fed hike probability, and the USD.

The talk, of course, over the weekend and today is around the moves in the AUD. It’s on fire and arguably the momentum play of last week. Speculative positioning (as of last Tuesday) stood at 37,631 contracts, although given the continued gains in AUD/USD since Tuesday (when speculative funds report positioning to the CFTC), the markets net long position would likely be pushing 40,000 contracts now. This is not extreme by any means and I would be far concerned about holding AUD longs when the net position moved above 60,000 contracts. The bulls would have perhaps liked to have seen a close through the April 2016 highs of $0.7835 (Friday’s official close was $0.7825). However, that may happen this week, with the combination of positively trending global equities, low volatility, widening nominal and real bond yield differentials and outperformance from Emerging markets clearly making the AUD the vehicle of choice to express this thematic. The hunt for carry and yield is alive and well, and the RBA is almost powerless to stop it.

In the absence of anyone really wanting to buy USDs with any conviction, we could even see 78c becoming a reality this week, notably, if we get above 6.8% yoy in today’s China Q2 GDP (released 12:00pm AEST). The higher frequency data is also in play, with industrial production, fixed asset investment and retail sales also eyed. Locally, we get the RBA minutes and the June employment print, with the market expecting a solid 20,000 net jobs to be created and the unemployment rate to tick up a touch to 5.6%. Clearly, an AUD/USD with an 80 handle could start becoming problematic for the RBA.

So the AUD needs close attention, especially from those also in AUD sensitive stocks or have good exposures to overseas equity and haven’t hedged an element of the FX exposures.

The ASX 200 should build on last week’s 1.1% gain, with SPI futures closing up 14 points and our call for the market sits at 5756. The target is for a weekly close above 5800 and much of that could be driven by further moves in offshore markets, notably with 21% of the S&P 500 market cap due to report, however, this backdrop of a global cyclical recovery amid subdued inflation reads is clearly an equity positive. Materials and energy are where the traders are focused, although BHP looks set for a flat open today, so the smaller miners will be of interest. Let’s also not forget that the consumer discretionary and staples had a good week, so perhaps these spaces could find buyers too.

As a lead for commodities though, the weak inflation read and the downside momentum in ‘real’ yields is helping gold, which has also broken and closed through the June downtrend. Spot iron ore closed down 0.3%, but Dalian iron ore futures put on 1.9%, with coking coal +1.1% and we have also seen US crude close at $46.54 and gaining 1% and up for a fifth day.