Macro-economic and geo-political factors dominate the mind sets of traders this week, although one can never take an eye off proceedings in Washington and the fascinating controversies around the recent sacking of former FBI director James Comey. 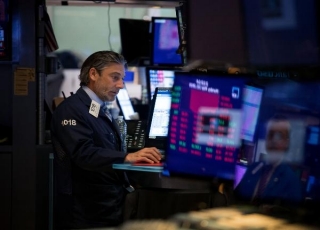 The wash-up, it seems (despite growing cries of impeachment), is that if you are not loyal to Trump, hold a position of power and maintain an independent line, then your career faces strong headwinds.

On Friday, we were dealt with further signs of vulnerabilities in US economic data flow, with April CPI (ex food and energy) coming in just below consensus at 1.9%, while April retail sales missed consensus, both at a headline and the ‘control’ group level. This didn’t please the USD bulls and we saw a strong bid in US Treasuries across the curve, with gains that were led in the five-year part of the curve, with the five-year US Treasury falling from 1.91% to 1.84% on the day. USD/JPY followed in its wake, falling from ¥113.86 to ¥113.20 (the US/Japan 10-year yield spread contracted six basis points to 2.27%) and this will likely play into the Nikkei 225 on open.

There has been a reasonable re-pricing of June rate hike expectations, with the fed funds future now looking at a 71% probability of a June hike (from the Federal Reserve), down from 81% in the prior session. We can look further out and see a total of 3.8 hikes by the end of 2019, which shows a subdued pace of tightening when compared to the medium view from the Fed, who are calling for over eight hikes through the same period.

Recall, the Fed see this period of soft data as ‘transitory’, so the market is still on the same page but for how long is uncertain.

The USD index fell 0.34% on the session, with EUR/USD pushing into $1.0930, helped by an article in a German publication (Spiegel), suggesting the European Central Bank (ECB) will look to lay the ground work in July for a clearer exit strategy from its quantitative easing (QE) program. Talk that the central bank would cut the run-rate of bond purchases in increments of €10 to €20 billion from next year has got a few traders excited and a move into $1.10 could be on the cards this week. It’s also worth highlighting that the speculative community has sung to its first net long position in EUR/USD futures (as monitored by the weekly Commitment of Traders) report since May 2014. So the notion that the USD is over-owned is clearly not the case.

It’s interesting to see that last week investors filled their boots with European equities, with fund flow data showing a record $6.1 billion inflow into European equity funds. This seems to have been driven by the political de-risking in France and market participants will be even more enthused by Angela Merkel’s Social Democrats winning comfortably in the weekend state election in North Rhine-Westphalia, Germany’s most populous state. Naturally, this has boosted her chances in the federal elections on 24 September. Italy is the elephant in the room though, but that risk is for us to worry about later in the year.

One can also throw in news that North Korea launched a ballistic missile on Sunday and this has caused USD/JPY to open a further 20 pips or so lower. It presumably won’t do any favours to S&P 500 futures on the re-open either, although I suspect they will be only modestly lower. Our call for the ASX 200 currently sits at 5835, with SPI futures closing up seven points at 5817. If we focus on the S&P 500 as a guide, then there is not a whole lot of inspiration for the bulls today, with 69% of stocks lower on Friday, with the gains centred in tech and utilities, which of course will not filter through to the ASX 200.

We can see signs of stability in the bulk commodity complex, with spot iron ore closing up 1.7%, in turn limiting the losses on the week to 0.6%. Iron ore futures were unchanged and steel futures were down 1.7%. China is centre stage. On Friday we saw the April credit data, with M2 money supply missing consensus by 30 basis points at 10.5%, while new yuan loans were close enough at RMB1.1 billion not to concern the market too greatly. We have also seen the PboC release its Q1 monetary policy report (over the weekend) detailing a desire for a cohesive and coordinated use of financial policy.

There was a degree of concern about over-tightening, which is thematic of their still overarching priority to keep growth at ‘around 6.5%’. This report comes at the same time as the government and President Xi Jinping has put out their vision of a global framework under the China’s Belt and Road initiative.

All eyes fall on China’s April data dump at 12.00pm AEST, with industrial production (consensus expecting +7%), fixed asset investment (+9.1%) and retail sales (+10.8%). Given this focus as its worth pointing out that AUD/USD has opened on a flat note at $0.7388 and gains this week should be capped into the $0.7450 to $0.7470 region. With wage and employment data to focus on this week, the Aussie has more than just China to concern itself with this week. BHP’s American Depository Receipt closed up 0.3%.