With the French elections bearing down on markets, the bulls seem to be wrestling back some control here and despite the prospect of real volatility on Monday, there is hope that all will be well. 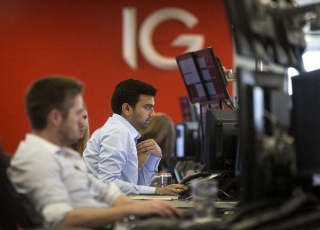 Having pared back expectations around the issue to a minimum, some have even bought into the idea that perhaps US tax reform could be on the cards. US Treasury Secretary Steven Mnuchin spoke as part of an IMF panel, discussing the Trump Administrations policies, and detailed that ‘we are close to bringing major tax reform’. He even gave a positive bias on the House’s border tax adjustment, but was concerned about the impact this would have on the USD.

The cynics, of which there are many (rightly so), just cannot see how tax reform works without healthcare reform. However, that being said, Donald Trump has also been on the wires overnight speaking predominantly on geopolitical issues. However, he also gave a fairly clear message about his confidence on getting health care passed, saying ‘we have a good chance of getting it soon’ and that plans are ‘evolving’.

Trump’s optimism may not necessarily be shared by markets, although that could change somewhat next week, so keep an eye on price action as you don’t want to get left behind if the bulls start expressing a stronger view about the prospect of Trump-inspired inflation again. We can even see different news outlets saying that a draft has been put in place, with CNBC even claiming that the new bill would secure 25 to 30 ‘yes’ votes from the now notorious Freedom Caucus. This would take the potential aggregate tally ‘very close’ to the required 216 votes to pass.

In terms of market moves, US equities have found good buying activity, with the S&P 500 closing up 0.8% (on above average volume). On the reflation trade angle, we have seen the S&P financial sector up 1.6%. However, we have only seen a slight sell-off in US Treasuries (across the curve), with the US ten-year Treasury gaining a mere two basis points to 2.23%. Inflation expectations have risen very modestly (if we look at the ‘breakeven’ markets), with the yield curve gaining just one bp. We have seen some modest inflows into the USD, with USD/JPY now at ¥109.30 (high of ¥109.49) and EUR/USD coming back into the 1.07 level. Gold also looks fairly well supported and if we were really excited about tax reform, then we would be seeing gold closer to and below $1275 by now – one to watch next week.

There is also no real concern either about Sunday’s (or Monday morning for us Aussie‘s) French election either, with European equities finding good buyers. The CAC 40 index rallied 1.5%, taking the CAC/S&P 500 ratio close to the highest since May 2016 – hardly a market concerned about holding French equity. We have even seen French bonds outperform that of their German peers, with the yield premium demanded to hold French two-year debt over German bunds narrowing by three basis points to 47bp. Traders have hedged core portfolio holdings using various options structures and strategies, and this is obviously the prudent step, but there is a genuine feeling that this election will be resolved in a positive manner – we shall watch with great interest.

Another interesting take-out has been the strong upside moves in bulk commodities, with spot iron ore gaining 1.2%. The futures markets have gone one better, with iron ore, steel and coking coal futures (traded on the Dalian exchange) gaining 4.2%, 2.7% and 4.9% respectively. Its no surprise then, that we have seen AUD/USD struggle to find direction, trading in a range of $0.7547 to $0.7493, with the feeling on the floors that there are greater downside risks to the pair. I continue to stand aside though and will look at short positions with far greater conviction on a close through $0.7491.

The Aussie equity open should hold a more positive conviction on buying equity here, with SPI futures gaining 30 points in the overnight session. Our ASX 200 call sits at 5848, with BHP likely to open 1% higher and banks looking to attract buyers here too. If we look at Vale as a proxy for all things iron ore we can see it closed 3.6% higher, so anyone long FMG or AGO will be expecting a nice way to finish the week.

Stay long in this space for now, with iron ore futures looking increasingly more positive on a technical basis here, with the bulls defending the longer-term uptrend and we have even seen a bullish outside day reversal off this trend support. If I were short iron ore futures here, I would absolutely be covering and even reversing into long positions.

Of course, the real concern is whether to how to deal with the weekend event risk and the prospect of gapping in all asset classes. We can see limited concerns so far, so watch price action from around 10:30am AEST, as it will tell us all we need to know about how Aussie equity investors feel about the French elections. A strong rally after the full unwind of the market will tell us they see a positive resolution, which seems fitting with the moves in French assets.