A divided road ahead

Following yesterday’s sudden market reversal with the strong ADP jobs report, commentary from the Federal Open Markets Committee (FOMC) stated that they would begin to unwind the $4.5 trillion stimulus program. 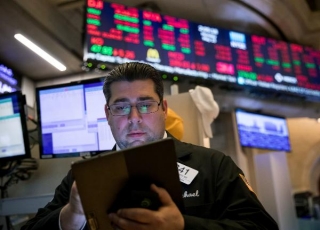 FOMC member John Williams has suggested that this can be done gradually over five years.

Traders and money managers are asking whether the tipping point has been reached. S&P 500 valuations are high, but could go higher. Earnings per share growth, a key metric for forward looking investors remain strong and looking achievable in a growing, albeit slow economy.

Some interesting survey results show 34% of US money managers believe the President’s ‘phenomenal’ tax cuts and tax reform will be implemented by the fourth quarter 2017. This may be viewed as a poor result in light of the failed repeal of the Obama healthcare bill and shows how few really believe Trump has the ability to push reform through and this is holding the bulls back here.

With Institutional money flow having a difficult job of sorting out the real headwinds of both political and fundamental news, it’s not surprising to see some short-term equity markets volatility. Although the US and Australian volatility index (‘VIX’) remain historically low, traders are closely monitoring any uptick in movement as an early sign. A sign that all is not well in the market scape where institutional money is holding a net long position in equities and US dollar denominated currencies.

Traders are now having to do the maths in a two-pronged approach. They now access the political risk to equities by way of law reform and tax cuts, both here and in the US, and the underlying economic growth underway in the US and Europe. We must also keep in mind how the European central bank president Mario Draghi recently expressed confidence in the Euro data points.

Evidence of this continues to validate euro growth with German factory orders showing a 4.6% increase and beating expectations of 3.6%.

The tax reform debate is now finding its way into the Australian trading agenda. With the May budget coming up, the outcome from potential new government initiatives around tax cuts in an effort to remain globally competitive.

Underlying all of this is the commodities markets, which have caught a bid from late 2016 price weakness. Oil is doing the round trip from the recent sell off to trade back into the early march lows of $52 a barrel level overnight.

One considering to trade domestically, should note the sizeable falls in commodity futures, with iron ore futures falling 5.4%, coking coal -2.7% and steel -2.7%. It seems odd that the American Depository receipts (ADR’s) for BHP is suggesting a flat open for the resource space. This seems largely a function of a higher oil price.

Gold in overnight trade has held the key $1250 level, with any uncertainty around current political events traders will be viewing this as the level to hold.

The financials carry a large weighting in the overall ASX 200 index and will be the driver again today, with the CBA ADR showing a small 0.4% gain overnight.

The SPI futures are pointing to a higher open by 13 points, which is nice to see as the markets consolidate above the key 5830 level.