ECB preview – steady as she goes, for now

No changes are expected at the upcoming ECB meeting, but will we get any hints about future policy changes?

Since the dawn of 2018, conditions are looking much more favourable for sustained economic recovery in the eurozone. No longer is the currency bloc in the emergency ward; instead it is seeing robust growth, to the point where the bloc is one of the most popular areas for equity fund managers. This is a point regularly flagged up by the monthly Bank of America Merrill Lynch fund manager survey.

As we look ahead to the rest of the year, we should, arguably, start to see the European Central Bank (ECB) shift its policy away from what is still, fundamentally, a very ‘dovish’ setting. The calls to scale back quantitative easing (QE) yet further, and to look towards ending the era of negative interest rates, will only grow louder as eurozone purchasing managers index (PMI) figures, and the like, point towards a healthy expansion. The December minutes gave a hint of this, noting that communication would evolve ‘gradually’.

The eurozone economy continues to enjoy healthy growth, with year-on-year gross domestic product (GDP) growth rising steadily throughout 2017. The risk of deflation has receded too, with the low readings around 0% year-on-year of early 2016 replaced by numbers towards the bank’s 2% growth target. However, the 2% target has yet to be met consistently, so the bank cannot scale back QE purchases prematurely. In addition, the rising euro reduces imported inflation, so we may see a drop back in consumer price index (CPI) growth once more, even once the ongoing rise in crude oil prices is factored in.

We are likely to see QE continue throughout 2018, perhaps with a further taper in September from the current €30 billion a month in bond purchases. But there will still be a gap between the end of QE, when it comes, and the first rate rise. Whether this will be enough to keep the euro rally going is another matter.

We have already looked at the long-term outlook for EUR/USD when we discussed how far the euro can go, so here we will examine the near-term view. The daily chart shows a consistent rising trend, in place since December 2016, and one that has posted new highs in the past month. Thus, the advantage continues to lie with the bulls, and we look for dips to buy, rather than rallies to sell. The rising trendline from the April 2017 low would suggest that a pullback could find support around $1.20, but in reality, any dip that holds above the previous low of $1.1725 would constitute a new higher low and be a potential buying opportunity. 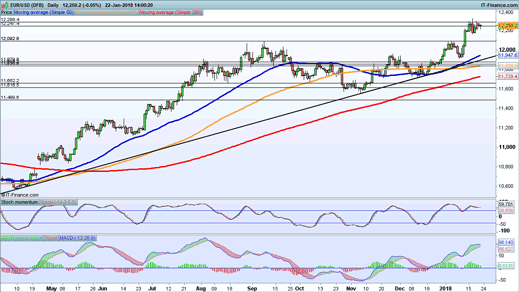 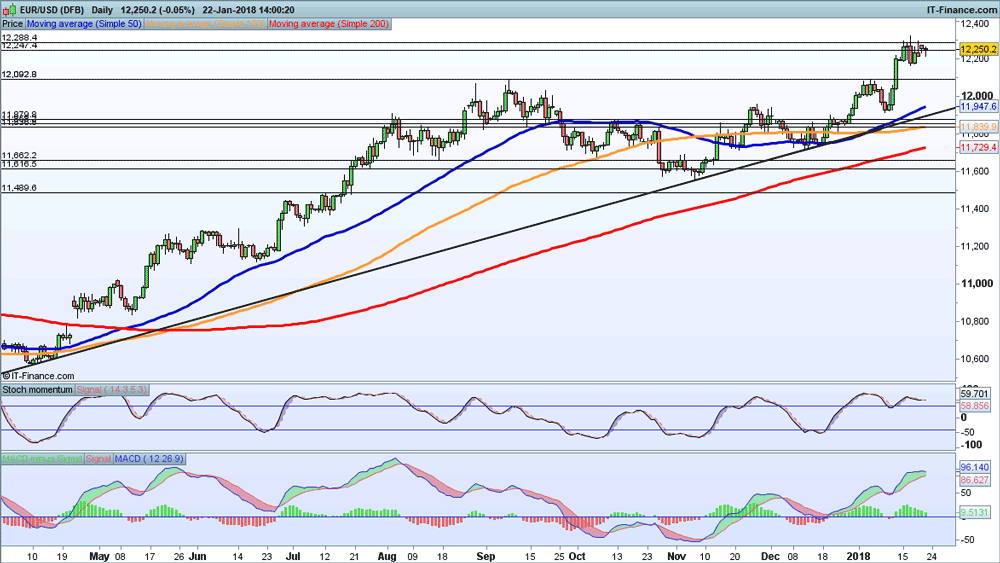