We have previously shared on the slew of worries weighing upon Asian markets, though nothing appears to grip the Chinese market quite as tight as the US-China trade tension. With the ongoing escalation, the Chinese markets look slated for further dents before any recovery to come.

The reality of the trade skirmish remains one of prolonged pains for Asian equity markets as we saw the CSI 300 declined more than 25 percent between January’s peak and the recent July trough. The exchanges between US and China, among others, had in recent sessions dribbled away at both investors sentiment and equity prices. This had been particularly so for the epicentre China. The corresponding impact on the Chinese yuan, which was brought to the weakest against the US dollar in almost a year, further reinforces the outflow that can be seen striking the Chinese market.

While the latest tariffs on the $34 billion of Chinese goods and equivalent Chinese retaliation had been taken in the market’s stride, along with expectations for the remaining $16 billion to come along, the escalation of the $200 billion tariffs item have triggered further fears. Through the release of the list of goods in consideration for the additional 10 percent tariffs, the US administration had opened up another round of contemplation of further escalations with China’s retaliatory moves still pending as we pen this. Notably, the latest reveal had also shown key Chinese manufacturing export industries coming under fire, likely to escalate the situation should the new tariffs materialize.

All the above said, recovery is still not out of the picture though more pain seems to be without a doubt at the moment with President Donald Trump’s ratcheting up the tensions. The approximately 5% lift for the CSI 300 in following the implementation of the 6 July tariffs and the lack of escalation thereafter exhibited the market’s keen interest to eventually look past the trade cloud and focus back upon the solid fundamentals. Whether we would really find tariffs reaching a level of at least $500 billion on Chinese goods remains the pertinent question and could represent catastrophic headwinds for Asian markets upon realisation. One would very likely have to blink first, whether China or the US. Look also to any upside surprises in Chinese data, another bane for the local market, that could provide short term boosts to prices.

While we mull over China’s response to the latest tariffs list, a look at the China 300 - the related market for the CSI 300 - found prices underwent a false break below the 3300 level, shuffling in and out of oversold territory. Further declines should not be ruled out towards the strong support seen at 3128, which had held the market through in the 2015 plunge. Recovery meanwhile has yet to kick into action. 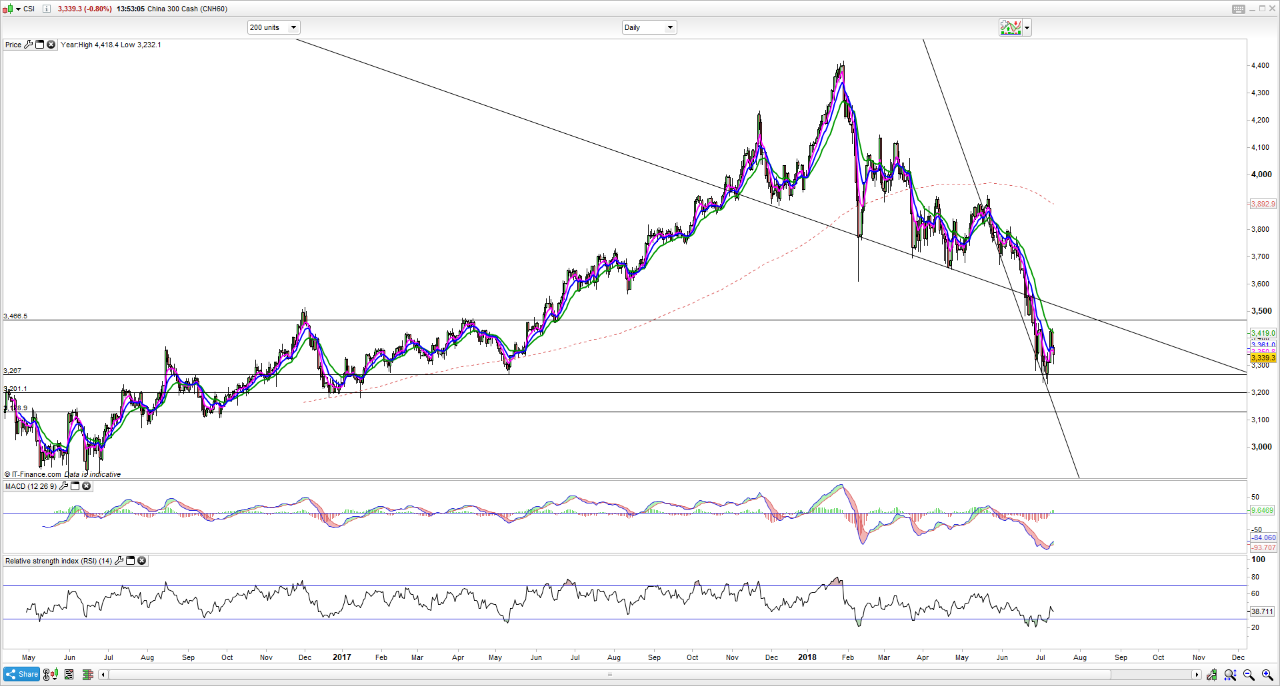