Biting on the Bitcoin

Created with the aim of becoming the world’s currency, the cryptocurrency, bitcoin, has certainly been less as decentralized as what the original creators had probably hoped for.

Since late 2015, we have seen bitcoin and USD/CNH moving in tandem with 99% of bitcoin reported to be traded in China1. Like a pot that has shrank in size, the diminishing holding power and attractiveness of the Chinese currency led to capital outflow in all directions into avenues including housing, commodity and the bitcoin.

Capital outflows have become a clear concern for Asian markets, especially China, since the US interest rate hikes outlook returned to the fore in building US dollar strength. Similar to the Malaysian ringgit, steep declines are not too distant memories for the Chinese yuan and have once again propelled these currencies to attention. 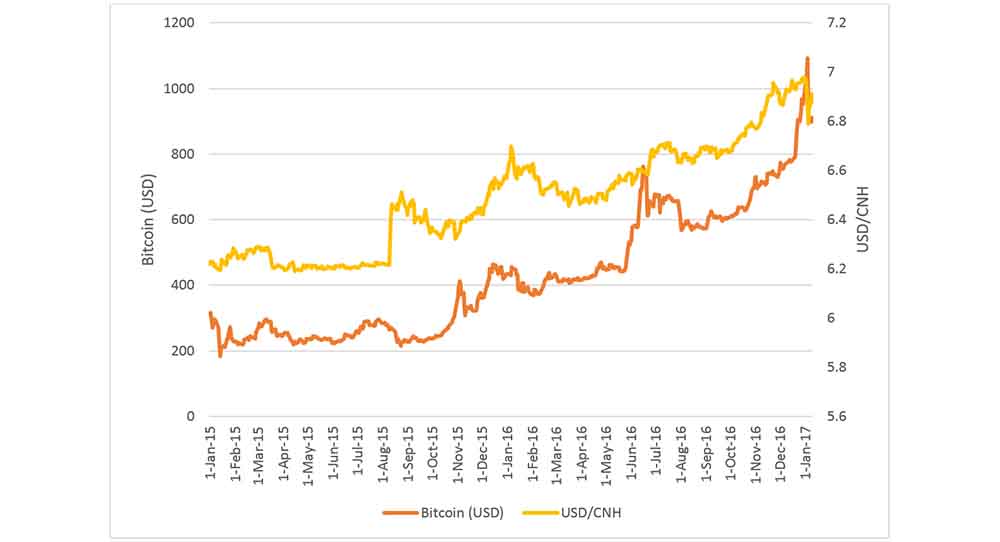 Measured against the US dollar, the offshore yuan has fallen 5.7% and 6.2% in 2015 and 2016 respectively, sending the market on a run for the hills once again. This was despite the fact that the Chinese currency clocked visible gains against other major and Asian currencies in the past six-month period. Last week, China reported on their foreign reserves, which was exhausted to the lowest level in nearly six years at $3.011 trillion as of December 2016. To the markets, it is clear that the authorities have been defending the yuan, but this had not been enough to keep a lid on the outflows. 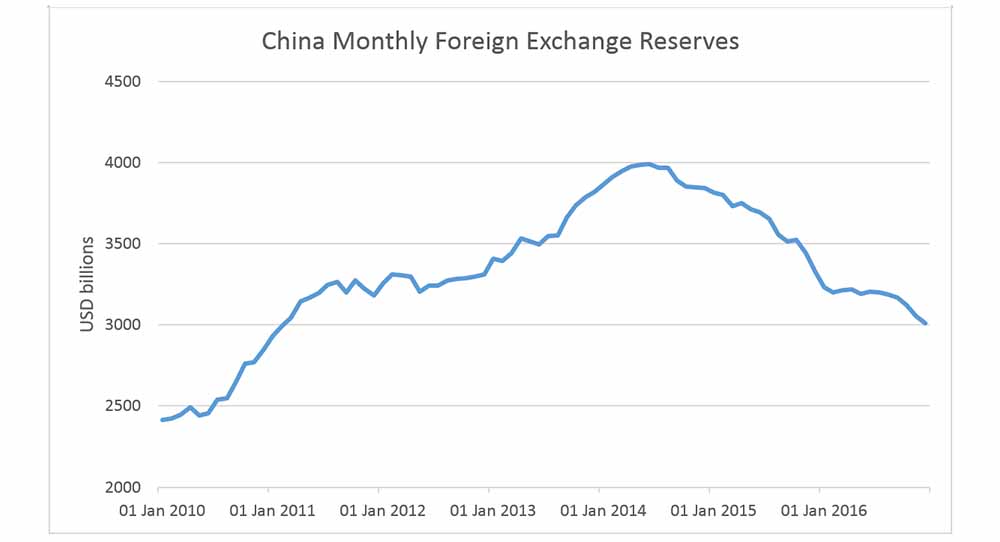 A slew of policies have been introduced to curb the various outflow channels and just the mention of bitcoin had been enough to send prices down 11.0% in one day on January 4 before examinations of bitcoin exchanges pushed it further to drop 13.3% on January 11. The $21 billion pot, accounted for by the 21 million coins (approx.) at $1,000 each, may not be a significant amount, compared to the amount that has departed the country in the past months, but have certainly caught the attention of the authorities. Mixed opinions have been cast on how feasible are controls by the Chinese government but prices certainly seem to be suggesting the worst with panic selling.

For the bitcoin, prices are at present a struggle between Chinese demand and Chinese authority controls. Wednesday’s 13.27% drop mark the steepest dip in percentage terms since January 14, 2015, when prices had fallen briefly below the $200 mark. In the fintech revolution, bitcoin is highly likely to remain a hallmark and stand to benefit in the long run. However, until then, expect developments in the Chinese markets to sway prices.

As things stand, the US dollar still has room to run on the upside which could keep mainland investors peeled for opportunities. The Bloomberg median forecast for the offshore yuan, USD/CNH, sits at $7.20 at the end of 2017 which will be a 4.2% increase from the current traded level at $6.90. Three hikes expected by the Federal Reserve Open Committee (FOMC) December summary of economic projections, if realised, would pile into the pressure upon emerging Asian currencies.

We are not one to speculate on the extent of control that the People’s Bank of China (PBOC) could exert, but according to Bloomberg news, the Chinese central bank have been looking for evidence of violations in their probe on Wednesday and the conviction of market manipulation or money laundering could send bitcoin declining more than the 20% year-to-date loss.